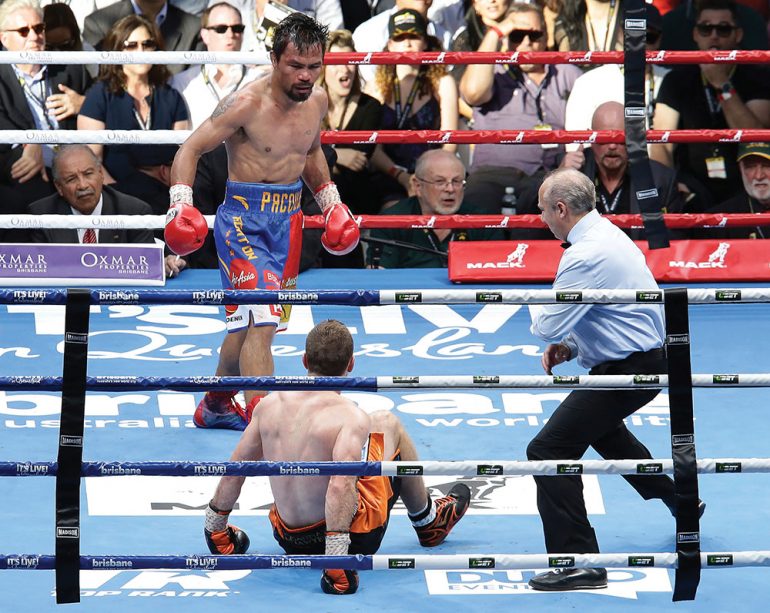 Manny Pacquiao’s return to boxing is being sorted out.

“Unless they can get some clearance from the league, we can’t do it in Las Vegas because none of the other arenas are available and we would have to do it somewhere else,” Arum told the RJ. “We’re working on an opponent. Don’t want to be too premature about that, but we’re working on it as we speak.

“Pacquiao seems like he wants to come back, so we’re trying to get that finalized.”

If Top Rank can’t secure assurances from the NHL that any playoff games would keep the proposed date free, the card could move to April 14 at New York’s Madison Square Garden.

Pacquiao, a future hall of famer who won titles in eight divisions, would be fighting for the first time since a controversial decision defeat to Horn in Australia.

The July bout was also the debut of Top Rank’s new platform on ESPN, and pairing Pacquiao along with the title fight could draw huge ratings.

Top Rank hopes to eventually match up Crawford, who will be a heavy favorite to dethrone Horn, with Pacquiao in a passing-of-the-torch bout, but first, Pacquiao needs to resume his career.

Now 39, Pacquiao appeared to be a shell of himself through 12 rounds with Horn. If all goes according to plan, the Filipino senator will have the chance to prove it was simply an off night.