Jessie Vargas, after long layoff, wants to prove he’s ‘best welterweight out there’ 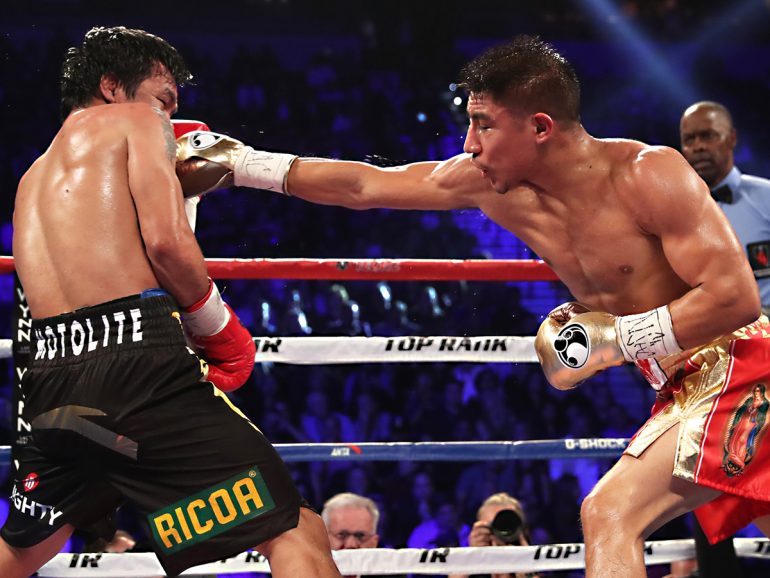 Jessie Vargas has only one win since November 2014, but he finds himself in the best stretch of his career.

He was outpointed by Timothy Bradley, but Vargas had the veteran hurt in the waning seconds of the bout when referee Pat Russell inexplicably ended the 12th round prematurely.

In his next bout, Vargas knocked out Sadam Ali — now a junior middleweight titleholder after he shocked Miguel Cotto — to win a vacant welterweight title. Vargas didn’t make a successful defense, but there’s no shame in losing to Manny Pacquiao who resembled a much different fighter in that bout than the one we all saw against Jeff Horn.

Vargas (27-2, 10 knockouts) hasn’t competed since the loss to Pacquiao last November, but he hasn’t been sitting around idly waiting.

The Las Vegas-based fighter left Top Rank and latched on with Al Haymon. Vargas will make his PBC debut Friday when he ends a 13-month layoff against Aaron Herrera in Lancaster, California (10 p.m. ET, FS1).

“I have enjoyed being a commentator and focusing on perfecting my technique and getting better as a fighter,” Vargas told RingTV.com. “I fit amongst the best welterweights in the world, but there’s always room for improvement in everything I do.

“That’s another reason I brought in Mike McCallum. “I feel stronger than ever. I learned a lot from his experience. I gained a tremendous amount of experience and I feel that it’s going to benefit me. It’s the second stage of my career, that’s how i see it.”

Now that he’s with Haymon, Vargas is in line for fights with the likes of unified 147-pound champion Keith Thurman, Errol Spence Jr. and Danny Garcia.

Vargas believes it will be apparent just how much he learned fighting not just Pacquiao, but also Bradley. In the setback to Bradley, which Vargas doesn’t consider a loss due to the controversial ending, he learned the benefits of starting sooner.

In the Pacquiao loss, Vargas realized the importance of stringing punches together. “I felt so confident that I was going to knock him out,” he said, and he focused on landing a single home-run right hand.

“I already feel much better with more experience, more knowledge — more comfortable inside that ring that I know what I’m doing and I have patience,” said Vargas, THE RING’s No. 10 welterweight. “The experience I gained, knowing in camp when is enough, and knowing when I should push it a bit more.

“I never had anyone guide me, i just thought you work hard and you do enough. I would work until I was literally exhausted and it kind of backfired.”

Vargas is now 28, and with age comes wisdom. He’s ready for his second act, and all the big fights that await him now that he’s linked up with PBC. Friday is the start of his journey there.

“I’m trying to make a statement and prove it,” he said. “I’m here and I know exactly what I’m doing, and I’m going to show I’m the best welterweight out there.”