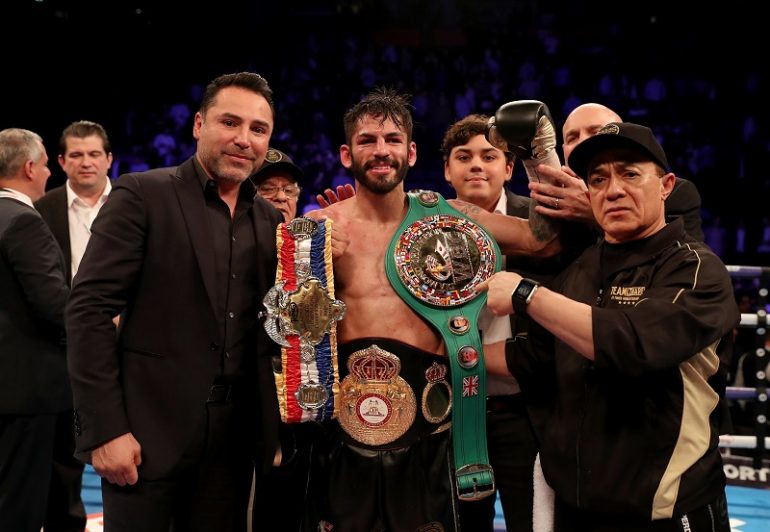 Linares displays some of his many world titles, including the coveted Ring Magazine championship belt, following a victory. Photo by Lawrence Lustig
27
Nov
by Mike Coppinger

Jorge Linares didn’t secure a fight with Mikey Garcia as he hoped for, but he’s going to stay busy.

The Venezuela native will defend his RING lightweight championship January 27 against Mercito Gesta at The Forum in Inglewood, California. The bout is the HBO co-feature to Lucas Matthysse-Tewa Kiram.

“I have travelled all over the world to win and defend my titles, and I am looking forward to having my hand raised in victory once again in America,” said Linares, who will be compete on HBO for the second consecutive time after years of fighting overseas.

“I know that Gesta has speed and power, but he hasn’t been at this level before, and on Jan. 27, he’ll know what it’s like to face a world champion.”

Linares (43-3, 27 knockouts) topped Olympic gold medalist Luke Campbell via split decision in September at the same venue. That performance followed consecutive decision victories over Anthony Crolla in England, and now, Linares is stepping down his level of opposition to stay sharp as he pursues a fight with Garcia.

Gesta (31-1-2, 17 KOs) doesn’t own a notable victory and in his lone step-up bout, he was outpointed by Miguel Vazquez in 2012. The 30-year-old Filipino will be making his HBO debut against Linares, a tall task.

“I know firsthand how long it takes to get a shot at a world championship, and I will not allow this opportunity to pass me by,” Gesta said. “I understand Linares is a great fighter, but I know I have the skills, speed, power, and great coaching which will get my hand raised in victory.”