Mikey Garcia gets an ‘A’ on this test: Weekend Review 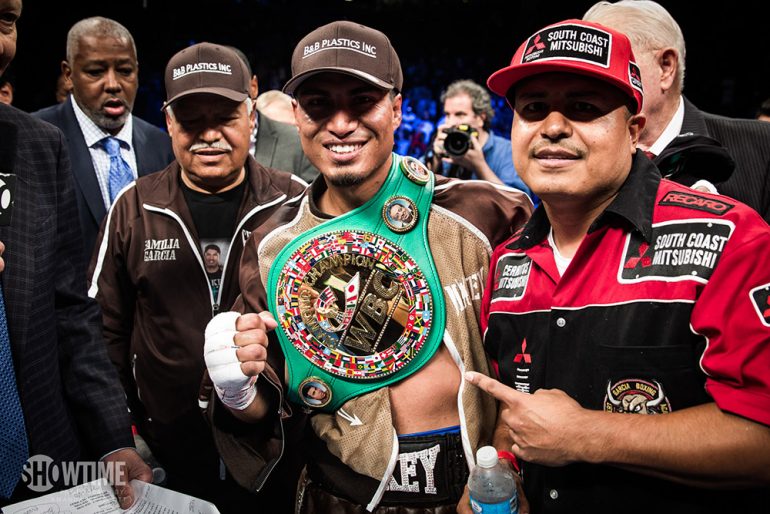 Mikey Garcia: Another fight, another step toward major stardom. Garcia is headed steadily down that elite path.

A fit, determined Adrien Broner was supposed to be a significant test for the lightweight titleholder on Saturday night in Brooklyn. In the end, Garcia turned the naturally bigger four-division beltholder into just another overmatched victim.

Garcia dominated Broner from the opening bell with his tight, perfectly timed punches and measured, but constant pressure that brought to mind a perfectly tuned, humming machine. The loser was never able – willing? – to get off his own shots consistently because Garcia never gave him much of a chance.

Garcia never hurt Broner, which might indicate that he didn’t carry his full punching power up to 140 pounds, but that might be attributed to Broner’s durability and the fact he wasn’t willing to open up and exchange punches.

I think Garcia can hurt any junior welterweight but the jury is still out.

Overall, Garcia (37-0, 30 knockouts) couldn’t have done much better. It was a performance that bolstered his reputation as one of the most-complete fighters in the world and places him firmly in the pound-for-pound mix, if he wasn’t already there.

I like slick, experienced RING lightweight champion Jorge Linares in a unification matchup. The Venezuelan has the skills, athleticism and experience to give anyone problems but, at 135 pounds, Garcia would have a significant edge in power.

I also love a Garcia-Terence Crawford fight at 140 but politics could preclude that fight from happening. And if Vasyl Lomachenko is willing to move up to 135, that would be a fascinating fight.

All the above matchups are high-profile, big-money fights. And there are a few others. That’s what you get when yo uperform at the level of Mikey Garcia.

Adrien Broner: Broner (33-3, 24 KOs) reacted with anger when interviewer Jim Gray suggested in the ring after the decision was announced that his fight with Garcia was “do or die,” suggesting he didn’t agree with that characterization.

The problem for him is that he doesn’t get to make that decision.

The fight was an important test for Broner and he failed badly, his third clear loss to elite opponents in his last nine fights. He will fight on but the days when he was seen as one of the best fighters in the world appear to be gone.

Broner understood the significance of the fight going in but didn’t fight like it, as his anemic activity level gave him almost no chance to have his hand raised. You can’t beat an opponent like Garcia by throwing occasional single shots.

Floyd Mayweather Jr. could win fights in that manner because no one could hit him. Broner is no Mayweather.

Broner seemed to be fit and comfortable at 140 pounds. I’ll never understand why he didn’t throw more punches, a problem he has had in other fights. The only thing I can think of is a lack of confidence. He was afraid of what would happen if he opened up, which is not how a great boxer fights.

Broner deserves some respect for what he has accomplished but he’s a poster boy illustrating how meaningless sanctioning-body titles are. He won titles in four divisions but these are the fighters he beat to do it: Vicente Rodriguez, Antonio DeMarco, Paulie Malignaggi and Khabib Allakhverdiev.

Those victories were all solid but they won’t launch Broner into the Hall of Fame.

Broner isn’t finished. He’s relatively young (28), strong and still a good boxer. It’s clear that he can still win fights. It’s also clear that his limitations will preclude him from reaching heights that once seemed to be within his reach.

Jermall Charlo (26-0, 20 KOs) looked terrific in his fourth-round knockout victory over Jorge Heiland, Charlo’s first fight as a full-fledged middleweight. I’m more convinced than ever that he has the all-around ability to climb into the pound-for-pound Top 10. I think he could give the best 160-pounds all kinds of hell. We shouldn’t get carried away with his performance on Saturday, though: Heiland (29-5-2, 16 KOs) became a one-legged fighter after twisting his knee in the first-round. To exchange punches with a beast like Charlo in that condition was courageous. One more thing about that fight: The ring doctor should’ve stopped it earlier. Heiland couldn’t defend himself. … Sadam Ali (25-1, 14 KOs) defeated Johan Perez (22-4-2, 15 KOs) by a unanimous decision but probably struggled more than he should have Saturday in Tucson, Arizona, taking too many hard shots and failing to put a dent in Perez. “I was just off,” he said. Ali, quick and slick, was a contender before he was stopped by Jessie Vargas in March 2016. I think the talent is there for him to get back to that level but, as he admitted, he has work to do. …

Rau’shee Warren (15-2, 4 KOs) looked comfortable after dropping down to junior bantamweight, at which he outpointed RING-rated McJoe Arroyo (17-2, 8 KOs) in an entertaining fight on the Garcia-Broner card. He might’ve found his ideal weight. … It’s too early to gauge whether Jarrell Miller (19-0-1, 17 KOs) can make noise in the heavyweight division but he certainly is imposing. The Brooklyn product is 6 feet 4 inches and weighed 298.75 for his fight against Gerald Washington (18-2-1, 12 KOs) on the Garcia-Broner card, which he won by an eighth-round knockout. Miller moves well for a man his size and has power. If he can trim down to, say, 250-260 pounds, he might have some success. … Victor Ortiz (32-6-2, 25 KOs) returned from a 15-month layoff to stop journeyman Saul Corral (25-10, 16 KOs) in four rounds. The former welterweight titleholder, now 30, looked rusty but still has his quickness and punching power. Plus, he seems to be more mature than ever now that he’s a father. He might have a little something left. We’ll see.