Robert Easter confident, but measured ahead of Denis Shafikov fight 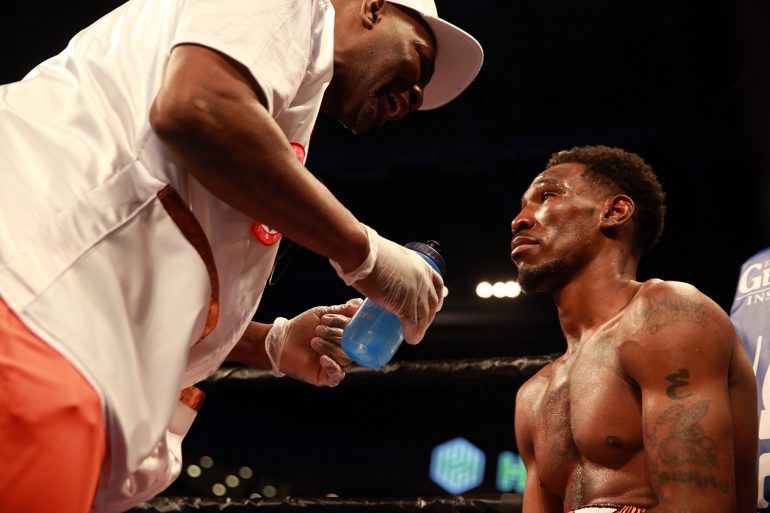 Robert Easter knows he’ll face a real challenge when he steps into the ring Friday in his hometown of Toledo, Ohio.

The slick, rangy lightweight will make the second defense of his IBF title against mandatory challenger Denis Shafikov at the Huntington Center on Bounce TV.

Shafikov (38-2-1, 20 knockouts) is experienced, left-handed and hungry. The 32-year-old Russian has failed in two previous attempts to win a world title.

“I’ve got a tough opponent ahead of me,” Easter told RingTV.com. “He’s a guy who will definitely come to fight and definitely come to try to steal my belt. It’s nothing I haven’t seen before. He’s a southpaw. I’ve faced many southpaws in the amateurs, in a couple of [pro] fights and in sparring.

“He’s pretty much a straight forward fighter. If I come out and use my skills and technique, it should be a cakewalk.”

Said Robert Easter Sr., the fighter’s father and trainer: “Robert’s going to go out there and control the fight and do what he does best: box the heck out of him.”

Easter (19-0, 14 KOs) officially opened camp on May 5 in Toledo but hasn’t really left the gym since shortly after he outpointed Luis Cruz in his first title defense in February, according to his team.

This will be Easter’s second consecutive fight in his hometown, which has its obvious advantages but also additional pressure.

Easter was recently awarded the key to the city and a parade in his honor drew an estimated crowd of 5,000. Presidential candidate Hillary Clinton even gave Easter a shout out during a campaign stop in Toledo in October.

Easter is motivated to give these people something special.

“It’s definitely exciting to host a big event for my … friends, family and fans,” he said. “They’re all excited and I’m excited as well. To see all the fans I have from Toledo come out and show support is just amazing.

“We’re looking at a sellout crowd. Last time was around 10,000; we’re hoping for something similar. That’s what we’re shooting for.”

Easter won the title when he defeated Richard Commey by a split decision in September in Reading, Pennsylvania. Shafikov will be another important victory if he can get it done. And then he hopes to face another 135-pound titleholder.

These are the other lightweight beltholders: Jorge Linares (RING and WBA), Mikey Garcia (WBC) and Terry Flanagan (WBO.

“[I want] to remain on top and build my legacy,” he said. “I feel great at lightweight. I’m going to defend and hopefully unify the titles. And then, later on in my career, I’ll move up.”

Garcia is stepping up to 140 pounds to face Easter’s good friend Adrien Broner on July 29. That’s a fight to which Easter will be paying particularly close attention.

“Yeah, that was a fight I was interested in,” he said, referring to Garcia. “But Big Brother got there first. (Laughs.) July 29th I’ll be watching A.B. get another victory.”

Trouble has a way of finding Broner, an unfortunate trait that hasn’t rubbed off on Easter.

“Me and Adrien have fun, we go out of town sometimes,” he said. “At the same time I’m my own man. If I feel I want to go home and just be at home and not do certain things, then that’s what I do.

“When I’m around we have fun, we enjoy life. That’s what he’s doing right now; he’s enjoying life. Unfortunately [in] a couple incidents the police got involved. That’s something you can’t do nothing about. Those incidents were somewhat stupid. It was just something that happened.

“If I have to be there for him to stay out of trouble, that’s what I have to do. Sometimes A.B. doesn’t even go looking for trouble, trouble just happens.”

Easter has been trouble only for his opponents.