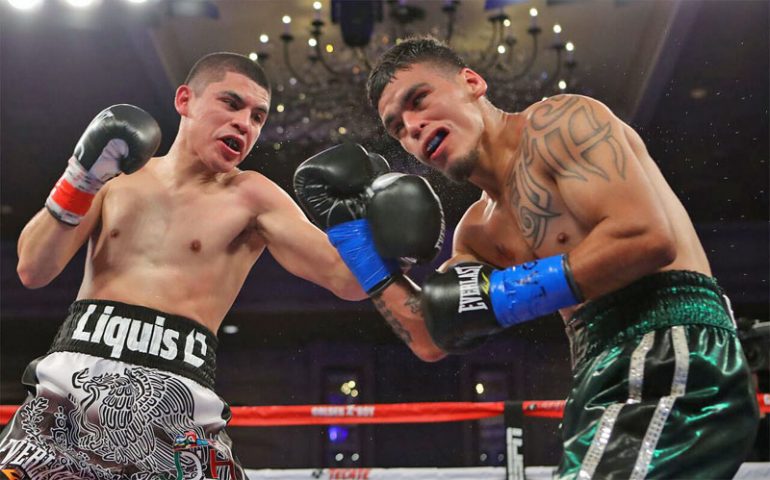 TUCSON – Diego De La Hoya isn’t in a hurry. It just looks as if he is.

De La Hoya blew away Erik Ruiz on Thursday night with the kind of speed that seemed to say a shot at a major junior featherweight title is next. But it isn’t.

De La Hoya will wait. Wants to wait. Behind all of the lightning-like quickness in his hands and feet, there’s patience in Oscar De La Hoya’s first cousin.

“I’m only 22 years old,’’ he said after winning a unanimous decision, a near shutout of Ruiz at Casino Del Sol in an ESPN-televised bout. “I have time. I want to enjoy this moment.’’

Actually, he enjoyed almost every single moment of the 10-round bout in front of a capacity crowd of 2,000, including his better-known cousin, who was at ringside for the Golden Boy Promotions show.

Diego De La Hoya (18-0, 9 knockouts) scored repeatedly with jabs fired at a machine gun rate. He’d duck in with an overhand rights. Then he’d duck out, all the while orbiting Ruiz in a circle choreographed by footwork learned during his long amateur career. 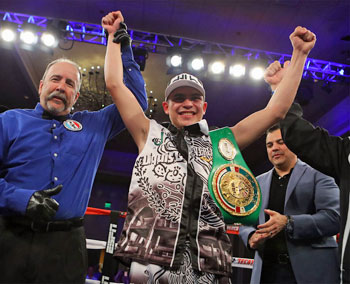 From his seat as an ESPN analyst, Golden Boy executive and future Hall of Famer Bernard Hopkins was impressed.

“Diego is one of the five best fighters we have at Golden Boy right now,’’ Hopkins said. “He doesn’t have to be in a hurry. He’s young. He really knows his way around the ring. He’s only going to get better. The other thing I really like about him is that he really likes it. He loves to fight.’’

His love for it was evident midway through the bout. Ruiz (16-7-1, 6 KOs) rocked him with a right hand. Diego De La Hoya looked at him and smiled.

It was the expression of a young fighter happy to be there.

“It was a smile of confidence,’’ he said.

Confident, perhaps, that’ll he’ll be in the middle of the championship mix before long and then for a very long time.

In the co-feature, super middleweight D’Mitrius Ballard avoided an upset but not boos.

Ballard, a Golden Boy Promotions prospect, scored a second-round knockdown and then survived one right hand after another to escape with a narrow decision over a relentless Adrian Luna.

Luna, a late stand-in because of an injury to Ballard’s original foe, was as surprising as he was unknown. At the end of the fight, the crowd chanted his name as if the Mexican fighter was from Tucson. After it was over, that same crowd booed the scorecards – 95-94 on two and 97-92 on the third.

Also on the card,  Joshua Franco (10-0, 6 KOs), a San Antonio junior bantamweight trained by Robert Garcia, wasted little time in the card’s opener, delivering a pinpoint left hook for a stoppage of Mario Sanchez (9-5-2, 4 KOs) at 40 seconds of the first round.

Robert Manzanarez (35-1, 28 KOs), a lightweight born in Phoenix now living in Mexico, relied on a long jab and quick feet for a unanimous decision over Erick Martinez (13-7-1, 7 KOs), also of Mexico.