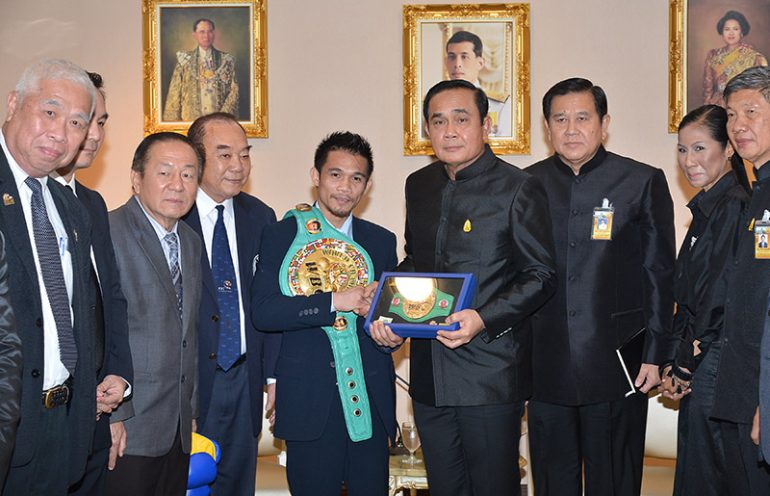 Srisaket Sor Rungvisai sprang one of the surprises of the year when he upset reigning WBC junior bantamweight and pound-for-pound king Roman Gonzalez on March 18 at Madison Square Garden in New York.

The win saw him become a national hero in his native Thailand. Today, he met with Thailand’s prime minister, Prayut Chan-o-cha.

“It is very special for me,” Srisaket told RingTV.com through his promoter, Thainchai Pisitwuttinan of Nakornloung Promotions. “I am very proud to be recognized for my achievement from the Prime Minister. It is a great honor for me and my family.”

As a sign if his new status, Srisaket will become a sergeant in the Thai police force. It won’t impact his boxing career but will give him a position in high society once he retires from boxing – a far cry from his stoic beginning.

Since returning home, his life has changed immeasurably.

“Everything changed from the moment I touched Thailand soil,” he explained. Since it was such a historical victory, we have been receiving a lot of attention and support from the public and all media.

“The exciting thing for me through this experience was the fact that this victory allowed my story to encourage Thai people, especially the youth, to work hard for their dreams. I was able to communicate my story of how I fought from nothing to be the world champion.

“Not too long ago, I was a garbage collector searching for food from the garbage on difficult days, but I fought my way to be the world champion through countless hours in the gym. I hope I was able to set an example to the youth that we can change our destiny through hard work and determination.” 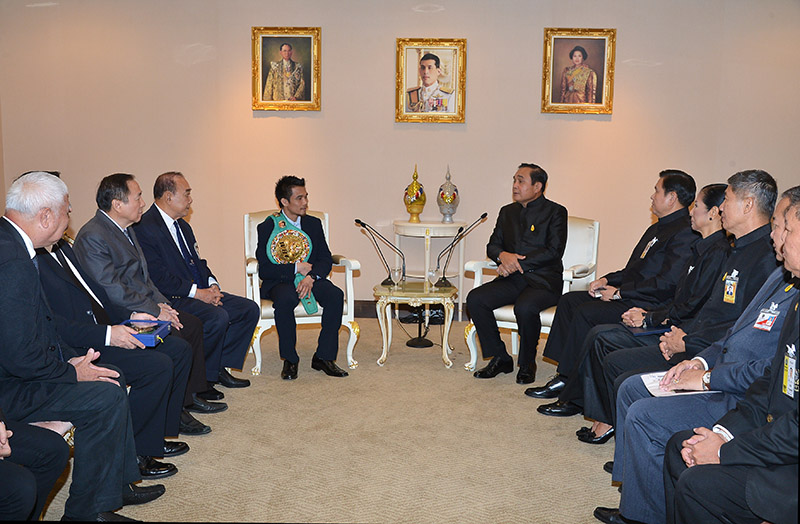 Sor Rungvisai, who advanced to 42-4-1 (38 knockouts) by taking Chocolatito’s unbeaten record, is understandably elated by making good on his pre-fight promise.

“I am extremely proud that I beat the best boxer in the world,” said the heavy-handed Thai southpaw. “I am also very happy that I could make Thailand proud. .. The victory was for Thailand and all the fans.

It is still early days, but while Srisaket is enjoying his new fame his promoter is working on their next move.

“I believe that many doors are opened for Srisaket after March 18th,” explained Pisitwuttinan.

“Our priority will be to first explore the opportunities in the U.S. for him. Fighting in the U.S. will be good for his career and also for boxing fans. I believe that he has the capability to be among the top global boxing stars, and the best way to show that is to have him fight in the U.S., which has the biggest platform in the boxing world.

“It is still early, but I will talk with K2 Promotions, HBO and WBC after things are more settled. Tom Loeffler of K2 Promotion, Peter Nelson of HBO Sports, and their teams have been very professional and supportive for Srisaket’s previous fight against Chocolatito. President Mauricio Sulaiman of WBC has always been a great supporter of Srisaket and boxing in Thailand. I will discuss with them to see what will be the best next step. If a rematch with Chocolatito turns to be the best option for all, I also think that it will be another great fight that the fans will love.

“Having Srisaket fight in Thailand will be a great way to promote boxing in the country as well. Our Nakornloung Promotion worked with BEC-Tero Entertainment in hosting a grand event earlier this March, and we will be eager to do it again. Our local fans will want to see Srisaket fights live sometimes. So there are many options possible. I will talk with WBC and our supporters in the U.S., then we will take it from there.”