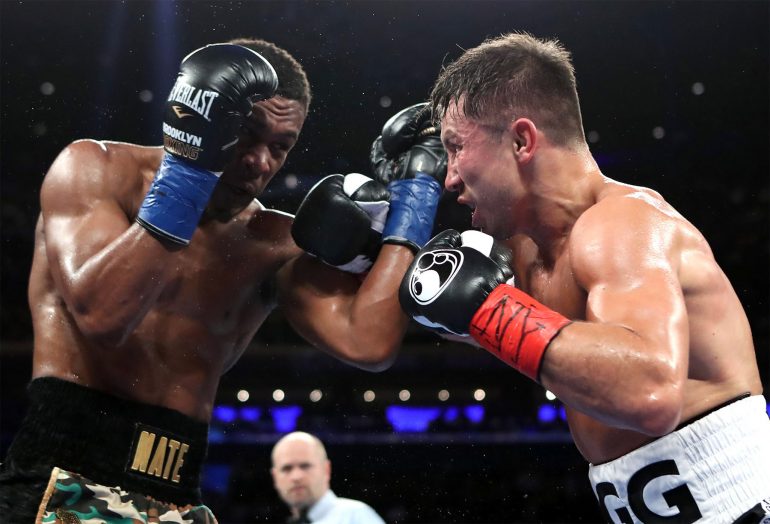 NEW YORK CITY – When the decision was announced, there were two boxers who looked annoyed.

Gennady Golovkin, who had been pushed by a surprisingly durable and dangerous Danny Jacobs, appeared dismayed after he was awarded a unanimous decision victory on Saturday, perhaps upset with his performance and that his knockout streak ended at 23 straight opponents.

Jacobs, who rose from a fourth-round knockdown and seemed to hurt Golovkin several times while exhibiting size and speed and an ability to absorb Golovkin’s vaunted power, was clearly frustrated in defeat. In the end, after Golovkin won by judges’ scores of 115-112, 115-112 and 114-113 to retain his WBA/WBC/IBF middleweight titles, there were two grumpy participants.

Perhaps the boxer who may have been the most pleased was Canelo Alvarez, who has been in talks with Golovkin for a big-ticket match in September for two years and may be more inclined to face Golovkin after Jacobs had so much success in front of an announced crowd of 19,939 at Madison Square Garden in the main event of an HBO PPV.

Jacobs, a cancer survivor whom few gave a chance to win, failed to show for the IBF’s second-day weigh-in on Saturday, making him ineligible to win the IBF title and allowing Golovkin to retain it with a victory. (Jacobs also avoided having to pay a sanctioning fee to the IBF for the right to fight for the title.) And Jacobs was clearly bigger than Golovkin on Saturday. While Golovkin safely tipped the scales at 169.6 pounds, inside the IBF’s 170-pound weight limit, there’s no telling how much Jacobs was on fight night. 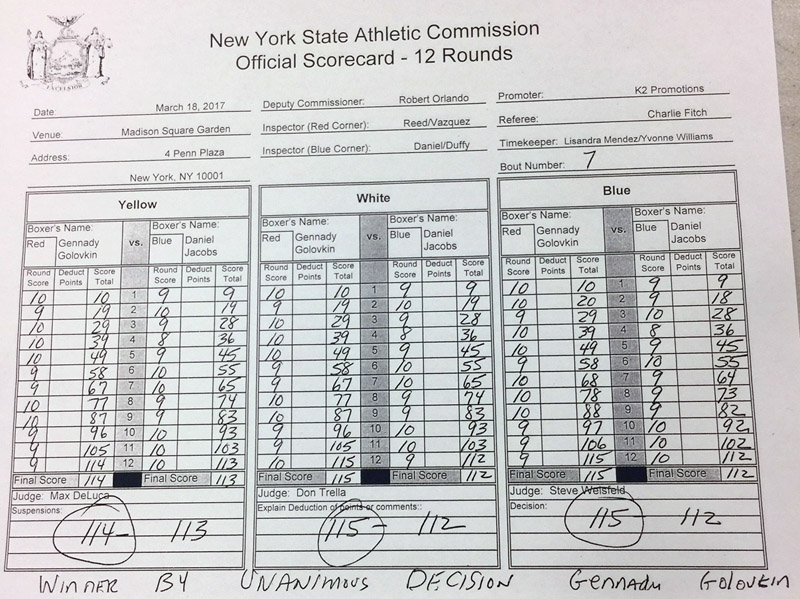 No matter the winner or the circumstances, it was a helluva fight, with plenty of momentum shifts, hard shots, a knockdown, and the kind of gritty performance by both boxers that fans respect.

“Respect Danny Jacobs and very good job and clean job and respect my team and all people that support me,” Golovkin said after the fight. “Danny Jacobs is my favorite fighter, clean, good quality, very good fighter. I wasn’t thinking that I needed the 12th round to win the fight. This was my first test at 12 rounds. I needed a quality fight not just the 12th round.”

Each likely quieted the whispers that had been following them for most of their careers with Saturday’s efforts: Golovkin finally fought a worthy adversary who pushed him, forcing him to dig deep. Jacobs showed off his toughness, durability and moxie, actually standing toe-to-toe with Golovkin and trading blows. So much for Jacobs’ reputation for a soft chin.

Jacobs collapsed when the fight was over, overcome with emotion, likely thinking he had won. He walked over and hugged Golovkin; the two exchanged words and hugged again.

Golovkin started fast, immediately stalking Jacobs, trying to test his resolve early after Jacobs had been knocked out by Dmitry Pirog in their 2010 title fight. Jacobs responded with a series of jabs and a hard right that Golovkin avoided. Golovkin tried to nail Jacobs with a slicing overhand right but Jacobs backed out of the way. Jacobs boxed smartly in the second, avoiding Golovkin’s methodical onslaught. Jacobs landed a few jabs, circling away whenever Golovkin got close. Neither landed anything meaningful, but Jacobs seemed to be controlling distance. Jacobs landed a snapping left midway through the third as they were in close and smashed his gloves together. Jacobs was keeping Golovkin in the center of the ring, not allowing him to bully him along the ropes, his size and speed clearly a problem for Golovkin. 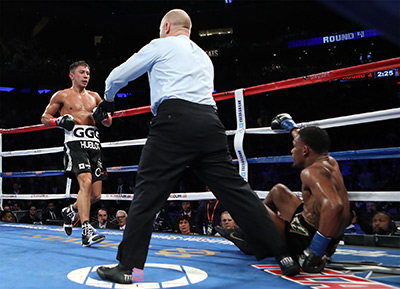 Golovkin dropped Jacobs with a pair of looping rights to start the fourth, the first hard shots of the fight; Jacobs grabbed at Golovkin’s legs as he went down. Jacobs smiled as he got up and waved his arms forward as if inviting Golovkin for more. Golovkin continued to land hard shots in the fifth, particularly an overhand right that backed Jacobs up to the ropes. But Jacobs was game, landing a big right in the sixth followed with a right to the body and combinations to end the round. The surprising show of offensiveness seemed to catch Golovkin by surprise; Jacobs looked at Golovkin as the round ended as if to say, “I’m not done yet.”

Jacobs continued to befuddle Golovkin with his hand speed and switching from orthodox to southpaw, landing several overhand rights in the seventh. When the two got in close, Jacobs had the faster hands and was catching Golovkin on the way out. The two exchanged violent shots as the round ended, Jacobs screaming at the crowd as he retreated to his corner. The two exchanged big right hands in the eighth. When Jacobs landed a chopping right, Golovkin shook his head out of exasperation. Golovkin landed a big right later in the round, though Jacobs seemed to take it well.

Golovkin landed two big right uppercuts in the ninth; the second seemed to hurt Jacobs but the Brooklyn resident came back and landed a hard left to end the round, nodding at Golovkin, who nodded back. Jacobs’ left eye showed signs of swelling in the second half of the fight. But Jacobs stormed back in the tenth, landing several flush shots while in close and ending the round with a monster left. The two kept a brisk pace in the 11th, trading blows. Jacobs landed some sharp lefts and rights; Golovkin took the blows well but his head snapped back with each punch, something that usually doesn’t happen. 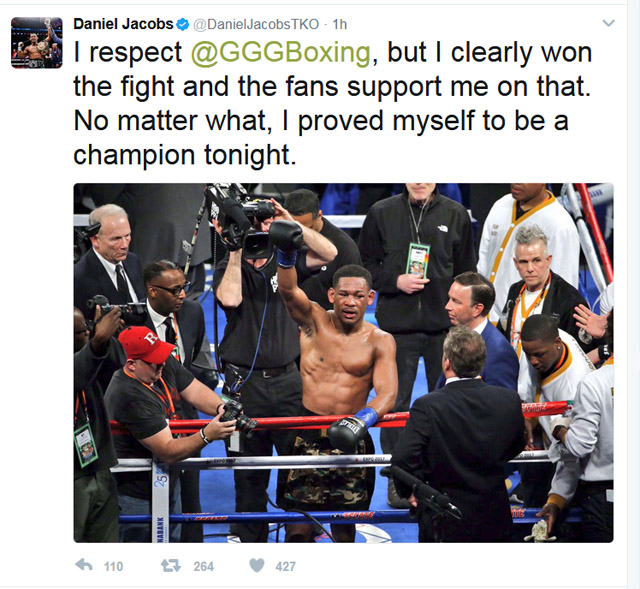