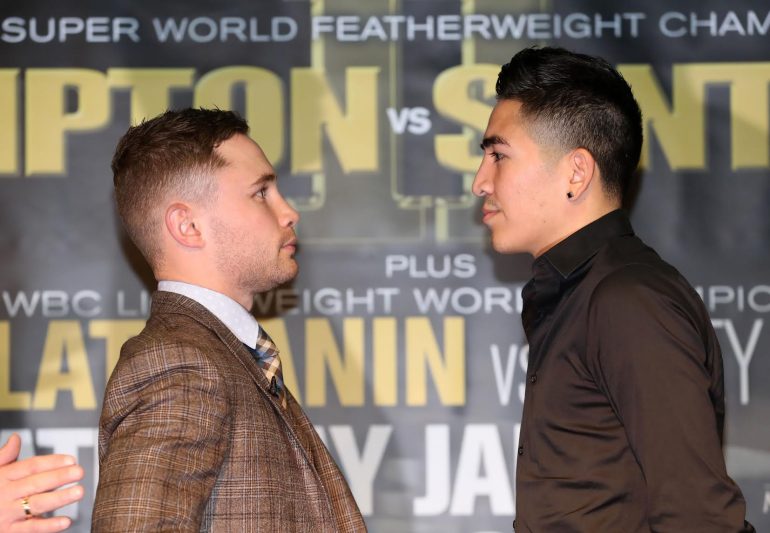 Carl Frampton is THE RING Fighter of the Year for 2016.

The superbly talented boxer-puncher from Belfast, Northern Ireland, unified two championships at 122 pounds by outpointing domestic rival Scott Quigg, before moving up to claim the WBA featherweight belt by scoring another decision over the previously unbeaten, and favored, Leo Santa Cruz.

Now rated No. 2 by THE RING at 126 pounds, Frampton mixes superb feet with lightning-quick hands, punch power and adept lateral movement. “The Jackal” is also underrated defensively and always presents a difficult target. He moves his head well and bends at the knees to avoid the incoming, before releasing torrid counterattacks.

Santa Cruz, who is rated No. 4 by this publication, is looking for revenge. The first bout between the pair was extremely close and the Mexican-American’s volume punching style and durability make him a significant threat this time around. The former three-weight world titleholder took the very best Frampton had to offer and fired back with everything he had for 12 enthralling rounds.

THE KEYS TO VICTORY

HANDSPEED (FRAMPTON 5/SANTA CRUZ 5) – Both men have incredibly quick hands and if there is an advantage either way, the naked eye can’t detect it.

ENDURANCE (4.5/5) – Santa Cruz is perhaps the toughest man in the division and would probably welcome a 15-round fight. Frampton is no slouch in this area himself.

FOOTWORK (5/4) – Frampton moves brilliantly and he can create space or close the gap in a flash. Santa Cruz can’t match the Irishman here.

POWER (LEAD HAND) (4.5/4) – Despite being a brilliant boxer, Frampton is also a puncher and he rocked Santa Cruz to his heels with a ferocious left hook in the second round of the first fight.

POWER (TRAIL HAND) (4.5/4) – Frampton is definitely the banger here. Santa Cruz suffocates his opponents with offense but he is not known for turning out the lights.

HOOK (4.5/4) – Frampton can lead with this shot and he can also catch opponents on the way in with the check hook. Santa Cruz simply includes it in his prolonged bursts.

ABILITY TO SLIP AND BLOCK (5/3.5) – Frampton mops up. The defending titleholder is terrific defensively and Santa Cruz, by comparison, is easy to find.

PHYSICAL CONDITION (4.5/5) – Both men are always in excellent fighting shape but Frampton did tire late against Quigg. That may have been down to draining himself to make 122 pounds.

POISE AND ABILITY TO COPE WITH EXTERNAL PRESSURES (5/5) – Santa Cruz has come through full training camps with his father battling cancer. Enough said. Frampton is also a complete professional.

KILLER INSTINCT (4.5/4.5) – Both guys are real fighting men and if an opponent is hurt, you won’t have to ask them twice to follow up.

INTELLIGENCE AND STRATEGIC DEXTERITY (5/4) – Frampton, by far, is the smarter fighter. Santa Cruz can box but his preference is to wear you down and take you out.

EXPERIENCE (4/5) – Frampton will be coming into his sixth world-title fight this weekend. Santa Cruz will be in his 13th.

BODY PUNCHING (4.5/4.5) – Both fighters are excellent at working to the mid-section.

INFIGHTING SKILLS (5/4.5) – Frampton picked his shots better than Santa Cruz on the inside in the first fight. He timed things better and made a real impression.

QUALITY OF OPPONENTS (4.5/5) – Having had double the world-title fights, it makes sense that Santa Cruz excels in this category.

CHIN AND RESILIENCE (4.5/5) – Santa Cruz seems almost bullet-proof and Frampton was knocked off his feet twice by the late Alejandro Gonzalez.

CROSS/ UPPERCUT (5/4) – Two great shots for Frampton. He broke Quigg’s jaw with an uppercut and picked the shot well against Santa Cruz. He also used the right cross to good effect.

ATHLETICISM (5/4) – Frampton is the thoroughbred here. He has all the moves, as well as the speed and intelligence to use them at the right times. 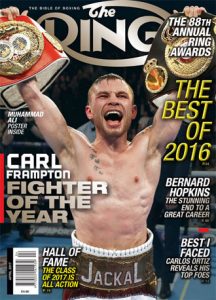 In THE RING experts poll for fight one, only five of 27 individuals picked Frampton to win and I was one of them.

For me, Santa Cruz, despite being a terrific prizefighter, is made to order and I don’t see what he can realistically change to even the score.

There are no secrets here. The challenger is going to come out blazing but Frampton has already proved that he has the required defensive finesse and counterpunching to deal with non-stop aggression. Santa Cruz threw more punches last time but Frampton was, by far, the more accurate fighter.

My guess is that we see the same thing again, although I expect the Mexican-American to put in even more effort. Ironically, that could be his undoing. If he throws more shots, he opens himself up to more counterpunching. If he targets the body, looking to sap Frampton of strength, then he needs to lower his hands and again, that leaves him open to something big.

Santa Cruz is a warrior and he wants this fight bad. Under normal circumstances, I would never pick a featherweight to stop him but I think he’s going to try too hard. In essence, Frampton will use his opponent’s vaunted aggression against him and I can see the Irishman causing real damage with combinations to head and body.

Sooner or later, Santa Cruz will be unable to take the punishment and the referee will be forced to rescue him.

Full fight picks for the Frampton-Santa Cruz rematch can be found here.