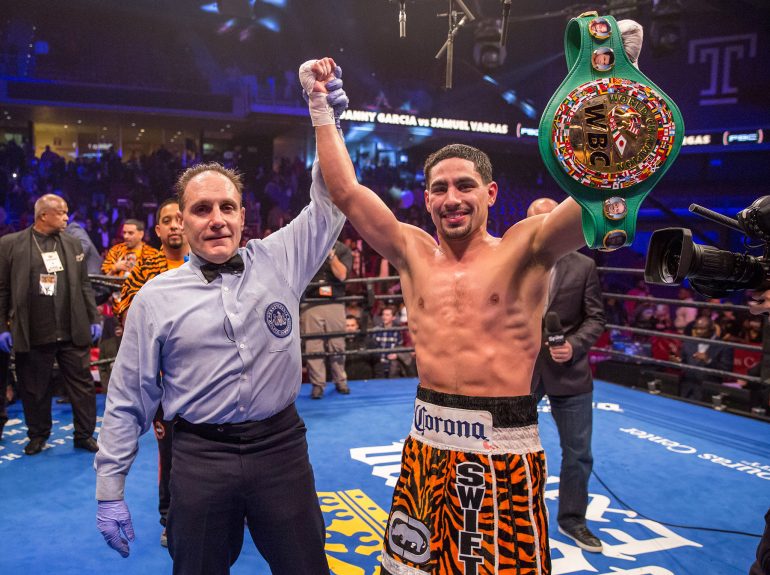 Photo by: Ryan Hafey/PBC
12
Nov
by The Ring

Welterweight standout Danny Garcia dropped and stopped Samuel Vargas in the seventh round of their Spike-televised main event on Saturday at Temple University’s Liacouras Center in his native Philadelphia.

The dominant performance by Garcia (33-0, 19 knockouts), who holds the WBC title, officially setup a welterweight title unification showdown on March 4 against WBA beltholder Keith Thurman, who was in attendance as part of Spike’s broadcasting crew.

The two welterweights met in the middle of the ring after the conclusion of the bout and began to set the stage for their explosive showdown. 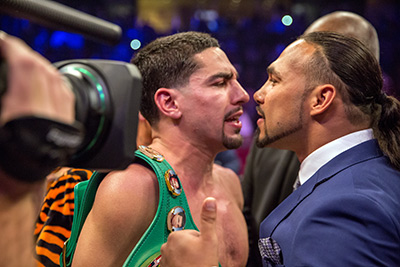 “I just had to tell Keith that he’s next,” Garcia was quoted in a Premier Boxing Champions press release. “I’m going to beat him down. There’s not much more to say. Keith is going to get what he asked for and now he’s going to face a big dog.”

“You have two big punchers meeting on March 4,” said Thurman. “I don’t see how the fight can go 12 rounds. I see myself as the best competition that Danny has ever faced.

“Danny can talk whatever he wants and (Garcia’s father and trainer) Angel Garcia can say whatever he wants. They can talk smack all day. Danny is real flat-footed. I believe I’ll be able to be on the outside, see the wide punches and counter punch. They said he wanted the tune-up, now he’s ready to see me.”

Garcia was sharp offensively and defensively against Vargas  (25-3-1, 13 KOs), a massive underdog from Colombia. He started slow but late in the second round, Garcia delivered an overhand right hand that sent Vargas tumbling to the canvas.

“I felt a little rusty,” said Garcia. “But I started putting my punches together well and came out with the victory. The overhand right knocked him down. It was just a well-timed shot.”

Vargas continued to come forward and work, but Garcia was entirely in control, making Vargas swing at air while delivering shots of his own that kept him in command. In the seventh round, Garcia began to unload with a series of big shots that hurt Vargas on the ropes. This eventually prompted referee Gary Rosato to stop the fight 2:17 into the round.

In the co-featured bout of the PBC card, junior middleweight prospect Jarrett Hurd (19-0, 13 KOs) stopped former welterweight title challenge Jo Jo Dan (35-4, 18 KOs) in the sixth round of their scheduled 10-round bout.

In the opening bout of the Spike broadcast, former junior lightweight titleholder Javier Fortuna got up from a first-round knockdown to outbox and outslug game and previously unbeaten prospect Omar Douglas (17-1, 12 KOs) over 10 rounds. Fortuna (31-1-1, 22 KOs), an unorthodox boxer from the Dominican Republic, won by scores of 96-93 (twice) and 95-94.