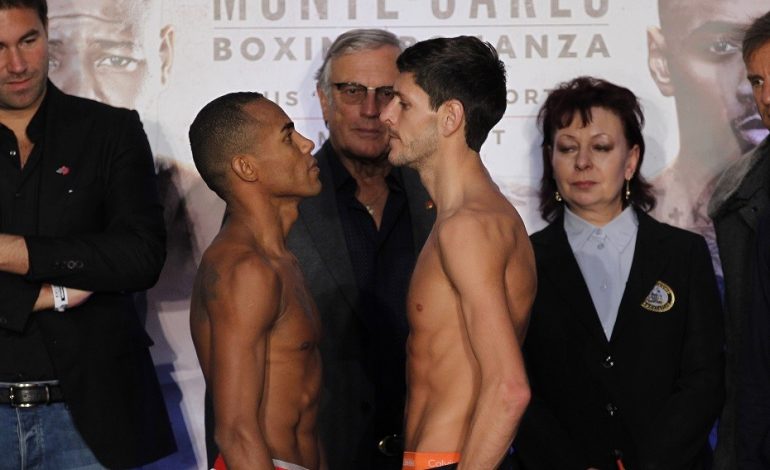 In a fight of two halves, British bantamweight Jamie McDonnell won a highly controversial 12-round unanimous decision over Liborio Solis at the Salle de Etoiles in Monte Carlo on Saturday.  The official scores were 117-111, 116-112 and 115-113.

McDonnell, who is rated No. 1 by THE RING at 118 pounds, behind champion Shinsuke Yamanaka, was tested from start to finish and some of the scoring was frankly awful.

Solis, a huge underdog coming into the bout, had major success throughout and the crowd angrily protested the verdict.

“I felt in control all the way through,” said McDonnell when interviewed by Sky Sports in the U.K., although the Englishman may have a different view when he watches the fight back.

“I’m a bit disheartened listening to your comments (about the fight) but it is what it is. We picked (Solis) because we wanted a tough 12 rounds. Maybe I’m a bit stale and we’ll see if (promoter) Eddie (Hearn) can get one of the big names at bantamweight before we move up.”

Solis went on the attack immediately, bloodied his opponent’s nose and got off to a fantastic start. McDonnell, trapped against the ropes, appeared shocked at what was in front of him and didn’t get going until the third round when a busy jab came into play.

The Venezuelan had real class, though, and frequently popped McDonnell with a heavy counter right hand over the jab. Subsequently, a cut opened up around McDonnell’s left eye in Round 7 and blood continued to flow freely from his nose.

McDonnell (29-2-1, 13 KOs) had his biggest round in the ninth when he bossed the entire session and hurt the former unified junior bantamweight titleholder with a big left hook on the bell. He bravely stood his ground in the late rounds but the prevailing thought was that the Doncaster man had left it too late.

The judges disagreed and after handing in tallies like that, they need a new line of work.

Murray (34-4-1, 16 KOs) landed well to the body throughout and edged more sessions but he was distracted at times and a little too easy to hit. Lawal, a natural middleweight, actually gave the Englishman a very spirited fight and could have a future at 160 pounds.

After sleeping through the middle sessions, Murray broke through with an accurate cluster of power shots to head and body in the ninth. A stoppage looked inevitable but Lawal was determined to cross the finishing line.

Murray was making his first appearance since dropping a 12-round unanimous decision to countryman George Groves in June.

The 34-year-old veteran had been scheduled to face former middleweight and super middleweight titleholder Arthur Abraham in a rematch, however the Germany-based Armenian pulled out due to injury. The same fate befell replacement opponent Dmitrii Chudinov before Lawal stepped in to fill the void on Wednesday.