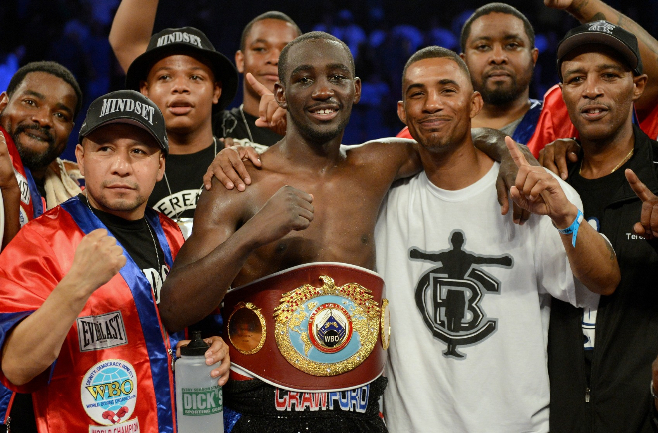 Terence Crawford and John Molina Jr. have agreed to meet on Dec. 10 at CenturyLink Center in Crawford’s hometown of Omaha, Nebraska on HBO in a bout that will give Crawford the third fight of 2016 he was looking for, promoter Bob Arum told RingTV.com on Friday.

And as an intriguing footnote and perhaps of even more significance: Molina Jr. is advised by Al Haymon. The cooperation between Haymon and Arum in making the fight could signal the start of an ongoing relationship in which the two mix and match their stables to make compelling fights.

Whereas it took six years for Arum and Haymon to hammer out Floyd Mayweather Jr.’s 2015 snoozer against Manny Pacquiao, finalizing this deal for Crawford-Molina was night and day in contrast. “Are you serious? There’s no comparison,” Arum said in a phone interview. “Al and I can work together. There are no issues.”

The contracts are not signed but Arum expects the fighters to put ink to paper over the weekend. There will also be a co-feature on the HBO bill that could involve the lightweights Juan Diaz, Jose Felix Jr. and Raymundo Beltran. The date became available when Gennady Golovkin put off his fight with Danny Jacobs for 2017 because of the complicated nature of the negotiations, giving Crawford the third fight of the year he wanted.

While Crawford (29-0, 20 knockouts) will be heavily favored against the 33-year-old Molina, the combination of the two power-brokers putting together a fight could be a touchstone moment. Or it could just be a one-off in which Haymon offers up the aging Molina for a payday. Only time will tell.

Molina (29-6, 23 KOs) vaulted to this position off his upset victory over Ruslan Provodnikov on June 11 on a Showtime card that broke a rough spell in which he had lost three of his last four matches to all top-notch fighters. Crawford has emerged as one of the top fighters in the sport after he cruised to victory against Viktor Postol on July 23 in a junior welterweight unification match.