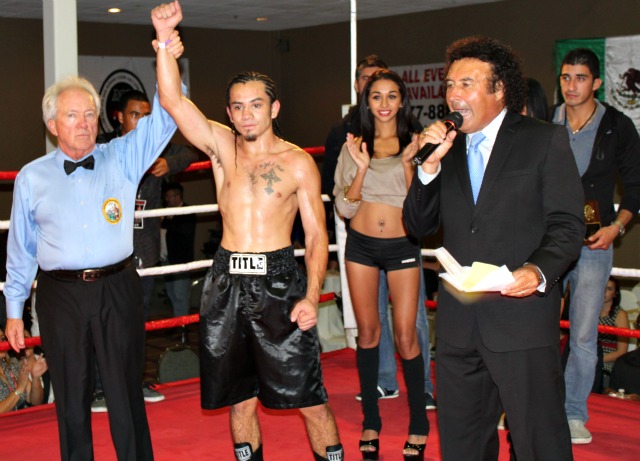 It is a crossroads bout between an unbeaten prospect and a fighter who believes he was on the wrong end of a close decision in his last bout.
Emmanuel Robles will face Steve Claggett Friday night in a 10-round junior welterweight bout at the Downtown Las Vegas Event Center. The bout will air live on CBS Sports Network, beginning at 11 p.m. ET/ 8 p.m. PT.

The southpaw Robles (15-0-1, 5 knockouts), who resides in San Diego, will fight for just the second time outside of his home state. In his last bout on May 20, Robles stopped Gerardo Cuevas in the fourth round.

“My opponent is in for the boxing lesson of his life,” said Robles, who has wins over Yordenis Ugas and Jonathan Chicas. “(Claggett) is going to be challenging, the toughest opponent I’ve had to face thus far in my boxing career.

“Defeating Claggett will put me on the map as a contender for the top 140-pounders in the world such as (Adrien) Broner, (THE RING magazine/WBC/WBO champion Terence) Crawford, and (Viktor) Postol.”

Claggett (23-4-1, 16 KOs) figures to be a good test for Robles. The 27-year-old from Calgary, Alberta, Canada has fought almost twice as many career rounds as Robles.

In his last bout on April 16, Claggett lost a close 10-round majority decision to Chris Van Heerden, a fight many at ringside thought was a draw or a nod for Claggett.

A loss to Robles could relegate Claggett from fringe contender to gatekeeper status.

“This fight means everything to me,” said Claggett. “It is a make-or-break fight for my career and I have a chance to re-enter the boxing world at 140 pounds, which is a weight that I believe I should have been fighting at a little while ago.

“A victory will stamp my name as a true world champion contender. I understand my position and I know that I am on the ‘B’ side but I have been in this position many times before.”

In the opening bout of the CBS Sport Network broadcast, welterweight Jeremy Nichols (5-0, 2 KOs) will face fellow unbeaten Steve Belmontes (2-0) in a four round bout.