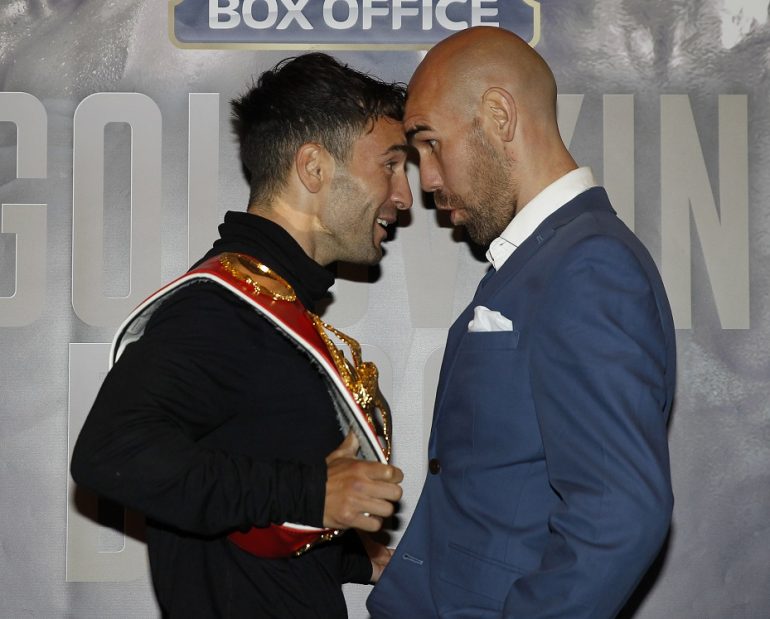 At the O2 Arena in London, England, this Saturday, “The Big Drama Show” will coalesce in the ring when unified middleweight titleholder Gennady Golovkin defends his belts against the reigning IBF welterweight titleholder Kell Brook.

However, while the buildup to that main event has been good-natured and professional, a world title rematch on the undercard is bubbling over with bad blood.

British veteran Stuart Hall will challenge countryman and bitter rival Lee Haskins for the IBF bantamweight title in a bout in which the blows have started flying early.

“Haskins tried to get into my head by slapping me at the press conference (on Wednesday) and he obviously wobbled me,” laughed Hall with derision.

“I’ve got too much experience to take all that stuff into the ring. I wasn’t experienced when we fought last time. To be honest, I think I’m in his head, not the other way around. I’ll be fully focused on fight night, but Haskins is arrogant and I can’t stand him.”

Haskins, who is rated No. 6 by THE RING at bantamweight, outpointed Hall in a European title bout in June 2012. Both men have improved since then and both have enjoyed world championship success but the 36-year-old Hall believes he has the edge in the rematch.

“This time will be different because of the caliber of the fighters I’ve been in with since the first fight,” said Hall, who will be looking to regain the very title he won by outpointing South African Vusi Malinga in December 2013.

“I’ve been in wars with world-class fighters, whereas Haskins bottled it to get in the ring with Randy Caballero at a catchweight. He knew he couldn’t win the title in the ring. He went all the way to Vegas after a training camp and didn’t have the cajones to get in there. I would have fought (Caballero) at a catchweight but Haskins took the belt and ran.”

Hall is referring to Caballero notoriously coming in a full 5.5 pounds over the bantamweight limit for a title defense against Haskins last November and, subsequently, surrendering his title on the scales.

Haskins, then an interim beltholder, was immediately upgraded to full titlist by the IBF and declined to fight Caballero at a higher weight due to the very real possibility of him having a large, and potentially dangerous, size advantage on fight night.

“It’ll be awkward for the first three or four rounds but once I suss him out, it’s game over. Stephane Jamoye, who got blasted out by Scott Quigg, stopped (Haskins in December 2012) and, while Quigg is a great fighter, Jamoye was tiny. Jamoye went in there, put pressure on Haskins and made him quit.”

In April, Hall was fantastic in a classic slugfest against Rodrigo Guerrero, whom he defeated by unanimous decision in a final eliminator. The Darlington man promises to bring that form to the ring on Saturday and the possibility of regaining a world title is all the motivation he needs.

“It means everything and that carrot is dangled right in front of me,” said Hall, unable to contain his pre-fight excitement. “I will go out there, deal with Haskins and then I only want to fight the best.

“There’s actually only one other fight I want and that is against, in my opinion, the best bantamweight in the world, Jamie McDonnell. We’re friends and it’ll be hard to go in there and mix it up but win, lose or draw against Jamie, I’ll shake his hand and we’ll go out for a drink.”

Haskins, on the other hand, can expect no such pleasantries from Hall this weekend.

“I don’t like him and I won’t like him after I beat him either,” snapped the challenger. “There is no way this fight will go 12 rounds. No way.”

Tom Gray is a UK Correspondent/ Editor for RingTV.com and a member of THE RING ratings panel.  Follow him on Twitter @Tom_Gray_Boxing