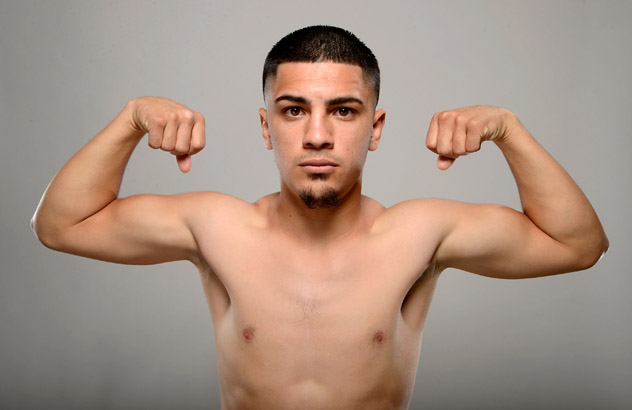 LAS VEGAS – The bantamweight title fight between Randy Caballero and Lee Haskins on the Miguel Cotto-Canelo Alvarez card was canceled after Caballero came in 5.5 pounds over the 118-pound limit. Caballero also lost his belt.

Haskins, who weighed 117.5, could’ve accepted additional money from Caballero to go through with the bout but he decided he didn’t want to fight at such a disadvantage and called off the fight.

“Haskins didn’t want to fight,” said Bob Bennett, Executive Director of the Nevada State Athletic Commission. “They were trying to negotiate it. They couldn’t find a resolution and canceled the fight.”

“I have no explanation,” he said. “I don’t know what to tell you. Never in this world has Randy missed weight and he’s devastated.”

Caballero (22-0, 13 KOs) would’ve been given extra time to make weight had he been 2 pounds or less over the limit, as per NSAC rules. He won the title in his previous fight, a unanimous decision over Stuart Hall in October. He weighed 117 for that bout.

Cotto and Alvarez both made their agreed-upon weight for their middleweight title fight at Mandalay Bay.

Cotto weighed in at 153.5 pounds, the same weight as his most-recent fight, a fourth-round knockout of Daniel Geale in June. Alvarez weighed 155, the catch weight the fighters agreed upon beforehand. It’s the third time Alvarez (45-1-1, 32 knockouts) has weighed 155 for a fight.

Cotto (40-4, 33 KOs) is the RING middleweight champion. His title is at stake even though the catch weight is below the 160-pound middleweight limit. It’s Cotto’s second defense.