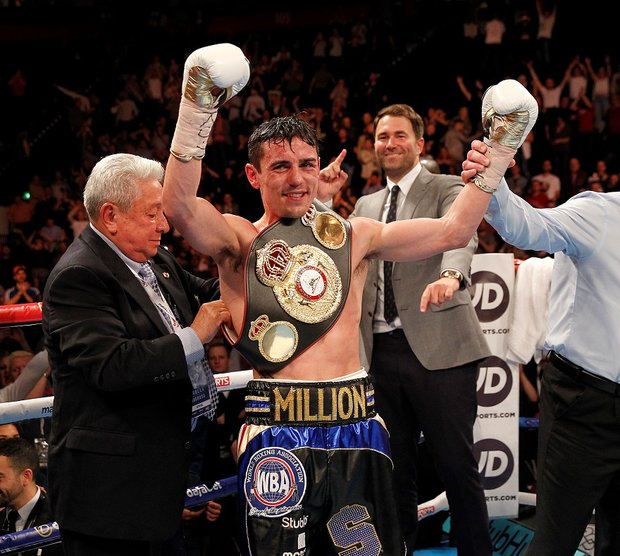 Anthony Crolla wants to create a boxing legacy and says that begins by beating Jorge Linares when they clash for the vacant RING and WBA lightweight titles at the Manchester Arena in England on Sept. 24.

Crolla, rated No. 3 by THE RING at 135 pounds, claimed the WBA title with a fifth-round dismantling of the highly respected Darleys Perez, before destroying acclaimed knockout-artist Ismael Barroso in his first defense in May.

The affable Englishman has never looked better and believes the winner of his clash with three-weight world titleholder Linares will prove himself the best lightweight on the planet.

“This is a legacy fight for me,” said Crolla at a press conference staged in Manchester on Wednesday. “Every young kid wants to become a world champion and I’ve done that now, (but) I don’t want people to think I’ve settled with that. I’m hungrier than ever and I like the huge nights way too much to let it go now. I’m happy to win the belts and go to Vegas for the rematch.

“Sometimes I have to pinch myself. Everyone in the gym are fans of Jorge Linares. (Super middleweight contender and stablemate) Callum Smith isn’t sure who to cheer for on the night. I think (Linares) is a great fighter, but on the night that respect goes out the window and we’re fighting for one of the great prizes in the sport.

Crolla continued, “The arena is going to be rocking. That’s my house, and I want to keep those three belts in Manchester. We’re working so hard in the gym because Jorge Linares is a phenomenal fighter and I’m honored to be fighting him in my house.”

Venezuelan star Linares is no stranger to English soil, having beaten Kevin Mitchell in London in an epic battle for his WBC title last May. The 31-year-old is delighted to be back in the U.K. and is looking to add more hardware to his impressive collection.

“It’s another big fight and big event that I’m grateful to God to be a part of,” said Linares, who is rated No. 1 by THE RING at lightweight. “Anthony and I have similar styles, there’s lots of respect between us and we’re working very hard. I know it’s going to be a tough fight, but I want to win those belts.”

A packed undercard in support of Crolla’s meeting with Linares includes John Ryder against Jack Arnfield, Isaac Lowe defends his Commonwealth featherweight title against Tshifhiwa Munyai and Conor Benn tastes his fifth night of action in the paid ranks with an appearance first at The O2 in London on Sept. 10.

Face value tickets for September 24 will also be available from http://www.stubhub.co.uk/matchroom-boxing-tickets/ . StubHub is the official ticket partner and marketplace of Matchroom Boxing and Anthony Joshua.