Brian McIntyre: Easy does it 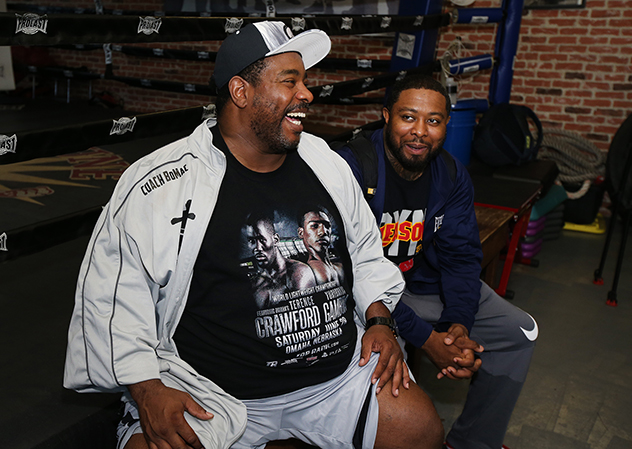 Brian McIntyre. Photo / Mikey Williams
24
Jul
by The Ring
He relished the opportunity going in, because he knows what brand of pugilist he works with, understood, for many moons, what level of athlete Terence Crawford is. So when Brian McIntyre looked on the other side of the stage during a press conference,  or heard Freddie Roach talk about the attributes of Viktor Postol, his boxer, McIntyre knew his version of events would play out.

“Easy work,” McIntyre told me on Sunday of Crawford’s systematic dismantling of the Ukrainian who entered the ring 28-0 (12 knockouts) but left humbled and stung by the reality that his formerly unbeaten mark and Crawford’s are of a different variety.

So, what were the differences? How and why did Crawford (29-0, 20 KOs, age 28) come to so totally dissect the man perceived by Roach as a 50/50 threat to down “Bud”? (And by the way, we do traffic in reality, knowing full well that Roach functions in part as a promoter coming in to fights such as this one, aiding the selling of the event by either bolstering the chances of his guy, if he’s the underdog, or offering some red meat chops busting/trash talking to stir the pot.)

McIntyre took it in, processed it and now offers some counterpunch. “Freddie said I was in above my head; he also said that the loser was going back to Omaha,” he noted.

Check it out: I do believe this outing, which saw the new RING junior welterweight champion Crawford maintain total focus as he employed constant movement, so Postol couldn’t get set, as McIntyre demanded after watching tape, maybe cements a victory for McIntyre as the Boxing Writers Association of America “Trainer of the Year” award winner. He has been with Crawford from the starting line and has been side by side, every step up the ladder; I think it’s merited.

This line of thinking brings up an interesting topic, that being, how important is the trainer to the success of the fighter? I posed the question to Big Mac: “75 percent fighter, 25 percent trainer in camp,” he said. “90 to 10 on fight night.”

Michael Woods posed the question to himself, “How important is caffeine to the success of a writer creating riveting content?” We’re still waiting for the answer. Dude passed out typing the question. Seriously, Woodsy’s question ended in “…contennnttttttttt??????:L”L>J”J:J”{{{?”””