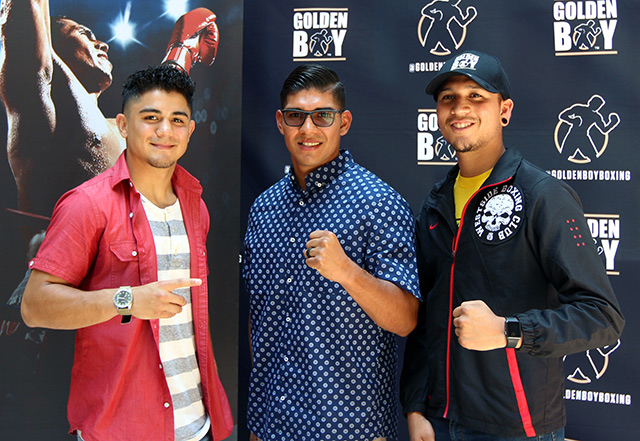 LOS ANGELES – A July 30 card co-headlined by junior welterweight contender Antonio Orozco and featherweight up-and-comer Joseph Diaz Jr. was announced at a press conference held on the outside patio of the Golden Boy Promotions offices on Wednesday afternoon.

The presser, headed by Golden Boy VP Eric Gomez was under the narrative of both young men being on the verge of fighting for world titles, and their respected fights on July 30 serving as a prelude. After their time at the podium under the sun, both spoke with RingTV.com

Orozco (24-0, 16 knockouts) is bound to get a world title shot by year’s end. Ranked in the top 10 of all four recognized sanctioning bodies and No. 5 by THE RING, Orozco is adamant he will first have to get through Abner Lopez (23-5, 19 KOs) before he can think about taking the next step.

“I did watch one of his fights when he fought an undefeated fighter,” Orozco said about Lopez. “I think he was a Russian guy – he put up a heck of a fight with him and narrowed it off. That’s the Abner Lopez we’re expecting. He still has a future ahead of him, and I’m pretty sure he’s fighting with everything he’s got, so we got to come prepared also.”

In his last fight this past March, Orozco, 28, made it look easy against former lightweight beltholder Miguel Acosta after stopping him within the first two minutes of the opening round. 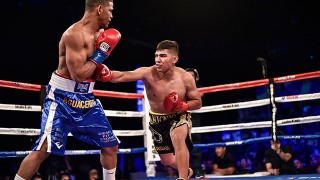 “Surprised, yes. Disappointed, no, never,” he said about the fight. “We got ready for the that fight like every fight. We always want to improve on something, and so the timing and the placement of shots gave us that early night, and we’ll take it. If I can go home early, I’m not gonna say no.

“It’s kind of like a home away from home. I started at the Fantasy Springs, and I continue to come back. It’s an opportunity I can’t say no to. Now with HBO being involved in this particular card, I just want to give the fans and all those tuning in what they deserve – great fights.”

A week before his fight later this month, waves will be made within the junior welterweight division, and Orozco will be caught in the thick of it should he take care of Lopez. On July 23 (HBO PPV), WBO titleholder Terence Crawford will attempt to unify his title with the WBC belt held by Viktor Postol. Orozco is the No. 1 contender of the WBC, and thus can conceivably face the winner in the near future as a mandatory opponent.

With that in mind and considering the HBO Latino platform he’s on, will Orozco take the opportunity to send a message to that fight’s winner?

“My message…” Orozco paused and thought before saying, “I have to win. I have to win first. Things will pan out after that. I’m pretty sure those guys aren’t worried about my fight. I’m not worried about their fight. I think after July 30, we’re gonna start seeing were our direction is gonna be.”

As for watching the fight, Orozco said of course he will, but as for a prediction to its outcome, the San Diego native wasn’t so sure.

“I see the fight 50-50. With Crawford being ambidextrous, and Postol who is a very lengthy 140 pounder, I’m sure he’ll give anybody problems. It’s going to be an interesting fight, I’ll tell you that much.”

Diaz (20-0, 11 KOs) isn’t as highly ranked when compared to Orozco, but the former U.S. Olympian, who is THE RING’s No. 9-rated featherweight, feels like he’s ready to evolve from prospect to contender, especially coming off the biggest victory of his pro career. 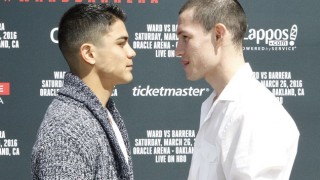 “It was nerve wracking,” Diaz admitted about his last fight in March against Jayson Velez, which also served as his HBO debut. “I was very nervous, and had a lot of jitters going into the ring. But once I was inside the ring, once the bell rung, and once I took that first shot, all the nerves went away, I was 100-percent focused, and it was time to eliminate Jayson Velez. That’s the thing about me, I’m capable of zoning everything out once I’m inside the ring, so no matter how big the stage, I’m willing to zone everything out and focus on my opponent.”

Fighting out of South El Monte, California, Diaz outpointed Velez in a wide unanimous decision, but the action fight also displayed what type of style he presents. Yet, “Jo Jo” looks to prove in this fight he isn’t a one-trick pony, and despite not having an opponent named yet for July 30, Joseph revealed what type of fighter he’d like to face.

“I feel like an opponent that can box and move around because I’ve been fighting guys that want to bang on the inside and create a brawl with me, and I feel like a person who will try and outbox me will bring out another Joseph Diaz, another style that people haven’t seen and I’m capable of doing. I haven’t fought a guy that wants to move around and create angles, and I’m really good at boxing as well, so I want to showcase that to the world. It really doesn’t matter what opponent they put in front of me. If they want to put (me in with) a boxer, then I’ll be able to cut off the ring and showcase that I’m able to do so and land effective shots. If they bring a brawler, then I’m willing to showcase that I can create angles and fight on the inside as well.”

With plenty of momentum behind him, Diaz, 23, feels like his next fight is crucial to his world title ambitions.

“People want to see the exact same thing they saw on March 26 – a really great performance, a solid Joseph Diaz, and a guy that overwhelmed his opponent and didn’t give him any rounds. I need to build that momentum because there’s going to be a lot of people watching me, so I know I got to be in my best shape. My father and I have been working hrs three times a day, grinding very hard. I’m ready to show everybody that I’m still the exact same Joseph Diaz from March 26th, maybe even better, because we’re practicing, sitting down on my shots more, and being more effective and I’ll show that on July 30.”

Also making an appearance at the press conference, and slated for the undercard at Fantasy Springs, was featherweight prospect Nick Arce (8-0, 6 KOs).

With an opponent still to be named, Arce shed some light on what kind of style he will be put in the ring with.

“We mostly train for aggressive fighters,” said the Los Angeles native. “So we went back to what got us here in the first place, which was using the ring, our reach advantage, and our agility to land certain punches.”

Arce last fought just a month ago on the Francisco Vargas-Orlando Salido undercard, and pitched a shutout against Francisco Dominguez.

Arce, 19, has been widely known to bring a large contingent of fans to every fight he partakes in, and July 30 will be no different.

“I started my career there in Indio, and they loved it. They like it more than ‘LA Fight Club’ because it feels like an arena, and they say drinks are cheaper. So it’s going to be loud.”