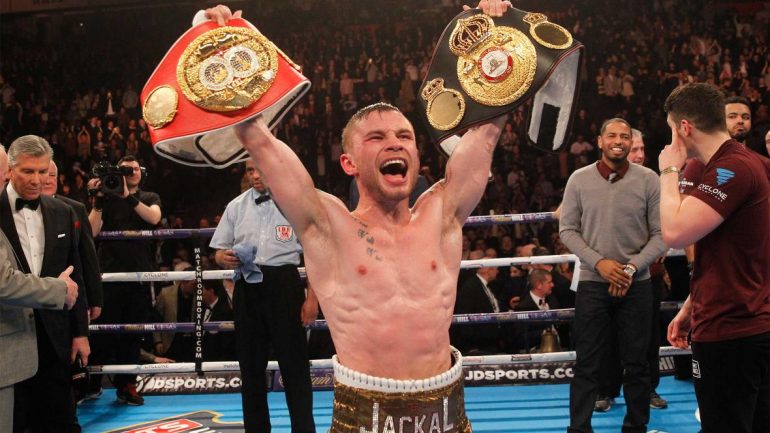 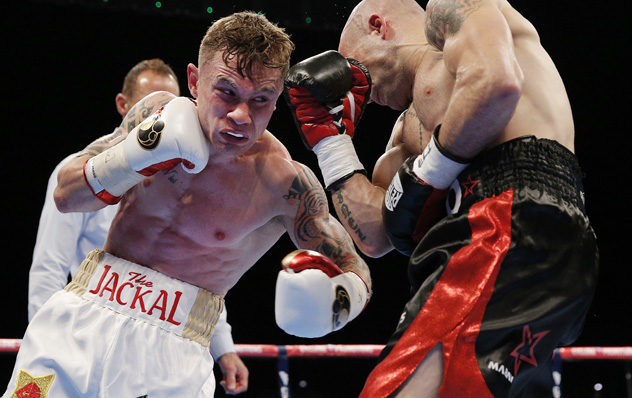 Carl Frampton (L) and Kiko Martinez square off in 2014 for the IBF junior featherweight title. Photo by Tom Jenkins/Getty Images.

Frampton, who is currently rated No. 2 by THE RING at junior featherweight, unified IBF and WBA titles at 122 pounds when he defeated Englishman Scott Quigg by majority decision on February 27 in Manchester, England.

The move north to featherweight was largely expected and the 29-year-old is oozing motivation at the prospect of becoming a two-weight world champion.

“This is the fight I wanted and I’m 100 per cent confident that the belt will be coming home to Belfast,” said Frampton in a press release issued by Cyclone Promotions. “It’s the belt that my manager Barry McGuigan held 30 years ago and it’s fitting that I will have the chance to recapture this title.

“Santa Cruz is a strong and aggressive undefeated champion but his style is made for me. My team have been chasing this fight for a long time and that’s because we know we have the tools to beat Leo. He throws a lot shots and is a proven operator. It’s going to be a great fight.”

The fight will mark the second occasion that Frampton (22-0, 14 KOs) has boxed in the U.S. but this time the Belfast man is set to have New York’s Irish community behind him.

“It’s fantastic to be boxing in New York,” he said. “It’s an incredible city with a massive Irish community who I hope get behind me for this fight. There will be a lot of people travelling over from Belfast, and the whole of the U.K. and Ireland as well so I’m expecting a good atmosphere on July 30.”

Three-division champion Santa Cruz (31-0-1, 17 KOs) is coming off an impressive fifth-round stoppage of former Frampton victim Kiko Martinez. The talented 27-year-old, who is rated No. 3 by THE RING at featherweight, took to his official account and stated, “May the best man leave the Barclays Center on July 30 with the Belt!”

Frampton’s manager, and Hall of Fame inductee, Barry McGuigan is very confident that his charge will be victorious in rhis eagerly anticipated featherweight clash.

“This is going to be a cracking fight,” said McGuigan. “Their styles complement each other so well, so the real winner will be the fans. It is going to be a tough fight for both men but I’m very confident that Carl will be able to impose his style on Santa Cruz and win this fight convincingly.”

Frampton has officially relinquished his IBF junior featherweight title, which will now be contested between Shingo Wake and a challenger yet to be named.

Tickets for Santa Cruz vs Frampton will be available from www.cyclonepromotions.com upon release. Information on the date of release to follow soon.