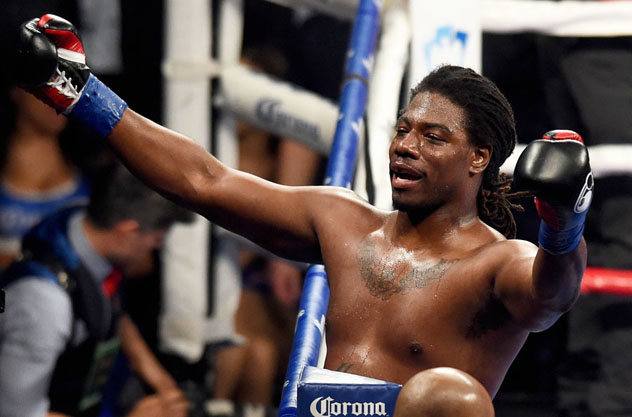 You watch this video compilation of decimation, of the 15 knockouts accumulated in 15 pro starts by young Anthony Joshua, and you might find yourself thinking his foe Saturday at the 02 Arena in London is in for it.

But wait, what’s this? Martin, a 6-foot-3 hitter born in St Louis and fighting out of LA, who was fighting under the banner of Michael King until the syndicator ace died last year, seems to be acting as though his fate is not pre-destined.

See him here, smiling, apparently loose and dialed in. Is he feeling pressure that the joint will be packed to the rafters with anti-Martin boobirds, 99.9 percent of them there to offer adulation to the poster boy of the Brit scene, Joshua? Not at all, says Martin in this video.

Some say that Martin’s patient manner could lead to him being the perfect style for a come-forward aggressor like Joshua, who is really nothing fancy but has good power on his left and better than good on his right.

“Clearly I have the ability to knock anybody out,” counters Martin. “Anybody can be knocked out.”

Not moved by that declaration, Joshua fans? Well how about this one? Tyson Fury, the charismatic gypsy, as he refers to himself, is telling one and all that Martin will reduce Joshua to rubble.

Fury kicked it off last week with “This game is not all about body-building. It’s about knowing how to box. He’s getting knocked out.”

Which led to this: 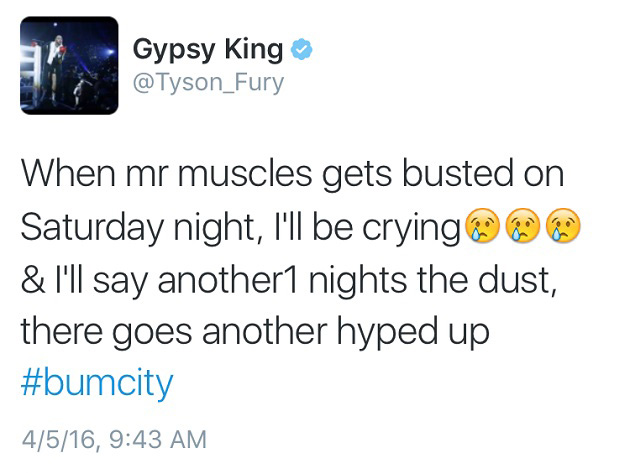 He’d told the masses that chinny Luverpudlian David Price was no prize package three-plus years ago and of course shouted to the moon that he’d handle Wladimir Klitschko before they tangoed last November.

If Martin’s demeanor doesn’t suggest to you he could be holding on to his IBF title belt, maybe Fury’s crystal ball-gazing should influence your guesstimate of whether the Prince or the poster boy gets their hand raised Saturday night.