Bob Arum the best ever, to this point 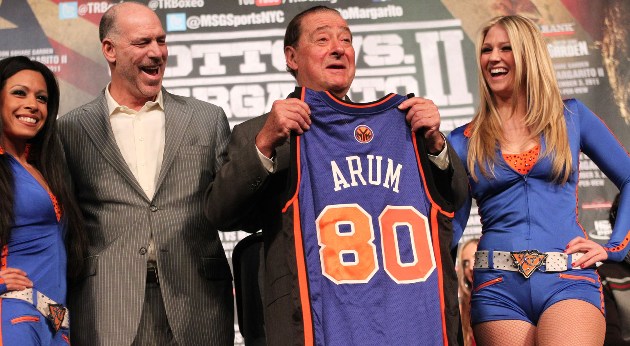 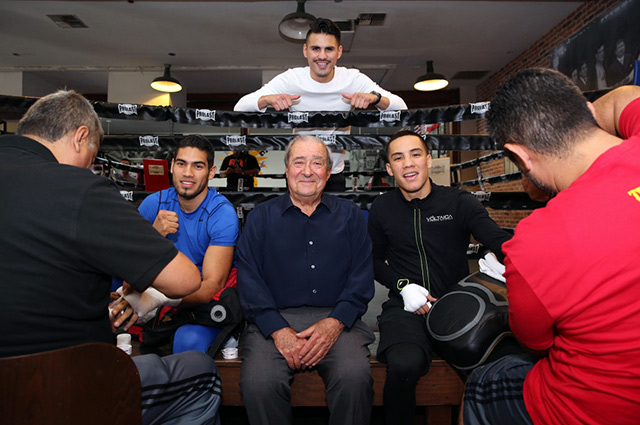 He went to Toronto last week, to be feted for his involvement in the first boxing match of his now 50-year promotional career, the Muhammad Ali vs. George Chuvalo faceoff, and, as Bob Arum admitted to me in his Brooklyn accent, flavored with a hint of curmudgeon-ese, he wasn’t fully looking forward to the occasion.

But then love kicked in, after he was reminded and informed in more detail how the promotion nearly went off the rails. “I’m one of the last men standing, if not the last, and they told me something I’d never heard about. A guy from the area with kind of a mixed reputation they told me was the real hero, saved the day, insisted the fight happen, bought out a partner, went to the bank for millions, so the fight could happen,” said Arum of the late Harold Ballard, the not universally beloved longtime owner of the NHL Toronto Maple Leafs. “But Chuvalo is still around, and in great shape, the ceremony was good, the people there were so excited. The Toronto people really touched me.”

Arum is not publicly prone to appear sentimental, and I can’t say I know of his private style, though people close to him tell me he does have that side that is warmer and fuzzier, with grandkids and such, than his public persona would suggest.

Makes sense that he’s not a “feelings” guy; to have navigated through the minefield that is the boxing business, without losing limbs, without some of those barbs sticking to you, like Ballard fended off, that is no small feat.

Check out the promo video put together by his crew at Top Rank, and you see the athletic royalty which Arum has helped promote and propel since leaving the Department of Justice, where he worked underneath Bobby Kennedy, the dogged bulldog of a lawman who, as Attorney General, made it his business to try and decimate La Cosa Nostra. Yes, if Arum needed a role model in dealing with some of the conscience-free operators in the fight game sphere, that was a solid soul to pattern oneself on.

His mom and dad didn’t think their son, after attending Harvard undergrad and Law School and managing to land in the “Camelot” sphere, would zig and then zag into the red light district of sports, pugilism. “I’m not sure they frowned on me entering this business because they never thought I’d do more than one,” he noted.

But the stuff hit his blood system, and he was hooked.

Understandable; the aura of Ali, the brand of dramatics surrounding that period, when The Greatest had to fight off the ropes against the will of the masses, really, once he chose to abstain from following government orders when drafted into armed service … this was a heady time, and we now look back and realize just how so.

On Feb. 14, 1966, Ali requested deferment. Three days later, Ali told a reporter, “Man, I ain’t got no quarrel with them Vietcong.” That hit the wire, and it was on front pages, and the haters were in majority rule on the subject of Ali. Now making an Ali fight became a political and moral stand. Cities turned down the proposed Ali vs. Ernie Terrell fight and then Terrell jetted. Canadian George Chuvalo, showing a toughness of character which mirrored his in-ring manner, took the gig but calls to boycott rang loud.

Arum, then 33, a former assistant U.S. attorney in N.Y., working at a private firm, emerged as the big brain who hatched ideas to bring eyeballs and open wallets to the promotion, though Herbert Muhammad, son to Elijiah Muhammad, was tabbed president of a conglomerate tabbed “Main Bout, Inc.” Herbert and fellow Nation of Islam big Jon Ali owned 50 percent, closed-circuit expert Mike Malitz 20, Jim Brown, an icon in football as a performer and also as a civil rights activist, owned 20, and young gun Arum 10 percent.

Brown is now the elder statesman who can relay the import of the Ali-Chuvalo promotion first-hand. Brown told Arum in Toronto last week about the immensity of the stakes, that if Ali wasn’t able to do this fight, a staggering blow would have been absorbed by the civil rights movement. People forget or didn’t know, public sentiment hadn’t tipped in America. Walter Cronkite still toed the party line, we were in Vietnam to keep the dominoes aloft, make sure the Russians didn’t spread their brand of evil from continent to continent. “When Ali made the statement he was not going in to the Army, you cannot imagine the effect on my parents. Their neighbors wouldn’t talk to them, their son was a traitor! In 1965-1966, 95 percent of the nation were not opposed to the Vietnam war,” Arum recalled.

So some comprehension of his legacy sunk in on the dealmaker extraordinaire, who but of course cannot boast across the board thumbs up from fans and colleagues in the realm. I dare say that wouldn’t be possible in the arena he has trafficked in. Arum wouldn’t have surpassed Don King as the top dog, as THE promotional pack leader, if he hadn’t made some deals that left the B-side irked.

For one thing, he typically doesn’t offer the common-sense answer that would perhaps play up a supposed fuzzy side when a softball query is pitched to him. No, he tells me, he isn’t interested in leaving the sport in the best possible place when his time to exit this stage comes. “I’m not going to build a new world, or change the world. Not going to be like PBC, change everything. I’m not equipped to do that, it’s not in my DNA. I take these kids, these young prospects and contenders like the ones fighting on the April 9 Pacquiao-Bradley show, and I build them as big as I can. People give me their careers to handle. That’s what I do. The other stuff, change the world stuff is bulls–t.”

On the subject of bulls–t ÔÇª Over the course of these decades building the legacies of the Alis and Foremans and Haglers and Durans and De La Hoyas and Pacquiaos, he’s accumulated rivals and foes. Put retired boxing writer Michael Katz high on that pound for pound (of flesh) list. Katz gave legs and teeth to the anecdote supplied by Newsday reporter Bob Waters, a Marine who covered the sweet science for 30 years, and died in 1987. Arum and some pressmen were lowering the levels of Scotch in a hotel bar, one night and then the next. Who is the greatest of all time, they debated. Night two, Arum backed a different hitter than he had the night before. Waters called him on it. “Yesterday I was lying, today I’m telling the truth,” Arum cracked, and the sippers exploded in laughter. Waters shared the line, teaching Arum not to get soused with keyboard rappers. But Katz resurrected it, polished it, and trotted out the line in many a column, as he enthused in skewering De La Hoya and The Bobfather. The phrase is not in Waters’ obit but will be in Arum’s. “I will never forgive Katz,” Arum said. “He took it out of context!”

Well, I said, most lessons learned are earned the hard way, right? At least you now know not to get wasted with us anecdote collectors. Maybe smoking would be a safer bet, I slyly offered.

“Maybe smoking, yeah,” he replied, voice trailing off, his brain settling on a tale from a yesteryear.

“Wanna hear a story about smoking?”

I salivated at a “Cheech” Arum take ÔÇª “Sure!”

“One of the writers you know was writing for a Las Vegas paper, he called me, he was in a different time zone. It was midnight where I was, and I told him, ‘I can’t talk, I just had some weed!’ So in his column, the guy writes, ‘Which bigtime boxing promoter smokes marijuana, and admits it?’ And he got a reaction ÔÇª Don King threatened a lawsuit!”

Back to the Ali-Chuvalo extravaganza. The show lost money. But Arum got addicted to the pace and the characters and the ability to innovate. Ali’s arc took a heavy turn, as on May 8, 1967, he was indicted by a grand jury for refusing induction into the U.S. military. He dealt with boxing exile for three and a half years, and Brooklyn Bob continued to soak up lessons one can only learn in the ring, that being the smoky back rooms in the company of the small band of decision makers and breakers in the realm. He showed the Main Bout boys he had the nose and gut and head for the promotional side and kept at it. On the phone with me, while I tried to tease out a softer side, get a sense of what he wanted his legacy to be, to learn whether he saw himself doing this at age 100, he stayed on script.

Sure, there were those delightful digressions like the blind item/King reefer tale ÔÇª but he stuck to the mindset that makes him what he is: The best to ever do this, in terms of impact and longevity.

“I don’t think about doing this at 100, that would be silly, and I don’t think I’m a silly person,” Arum told me, eight days before the first bell would ring in maybe the final fight of the wondrous career of his most prominent stable staple, Manny Pacquiao. “I do it one fight at a time. I’ve agreed to head up the careers of these terrific young kids, Oscar Valdez and Gilberto Ramirez and Jose Ramirez ÔÇª and they rely on me for planning their future. They are going to be the future superstars and that’s what keeps me going. I look back on what I accomplished with Oscar, what a star he became, and Floyd Mayweather, and these young kids, and you have Terence Crawford, that’s what keeps me going. Not what I did before or what I’m doing now, it’s what I will be doing in the future. That’s what keeps you alive. I don’t think about, ‘Am I the best to ever do this?’ These kids trust me to build their careers. So it’s not just this Pacquiao against Tim Bradley big one ÔÇª But this Pacquiao-Bradley fight isn’t maybe going to be the best one of the three, this will be the best!”

He spoke about Teddy Atlas being a master psychologist as the best coaches are; he spoke of Bradley now possessing a map and a compass, after being a boxer who’s not been blessed with superior game planning, supposedly; he had me believe big, almost, maybe, that Pacquiao’s right hand could match his left for power, because he’d finally repaired a perennial rotator cuff issue.

Arum stated his best case why this third clash between the rivals would be a classic for the ages, even though the first two weren’t and Pacquiao, one presumes, has slipped since they first tangled. And he had me believing. I would have pressed the Buy button on my remote then and there if it had been handy. He’d accentuated the prospect of the possible, applied maybe a touch of rouge and mascara and a sweet shade of lipstick to the PacBradley package, and he hadn’t even yet delved into how Donald Trump, that wretch, had weaseled and conned him, he believes, in a 1990s promotion.

“Bob,” I said, pausing, searching for adequate and accurate phrasing, “you are a promoter.”

With a capital P.

And I said it yesterday and I will say it today, the best there ever was, to this point, and no, I’m not lying.