Pulev-Chisora scheduled for May 7 in Hamburg, Germany 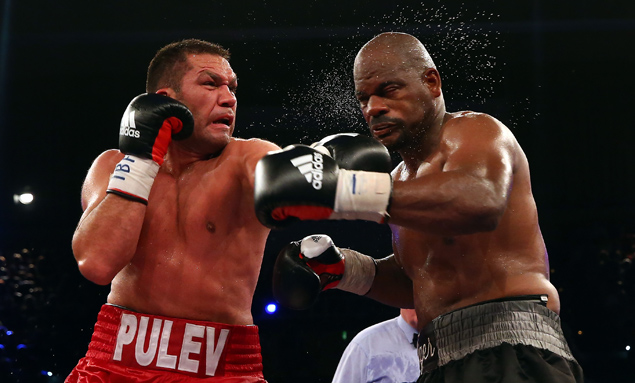 Pulev has recorded back-to-back victories over George Arias and Maurice Harris since failing to dethrone Wladimir Klitschko in November 2015, while Chisora, who challenged Vitali Klitschko for the WBC title in February 2012, is unbeaten in his last five outings.

“This is a very important fight for me,” said Pulev who is rated No. 4 by THE RING. ”I learned a lot from the Klitschko fight, but now I’m back and stronger than ever.

“Dereck is a good boxer, but I’m better, and I know I can beat him. I’m looking forward to the challenge and the chance to win back the European title. I’m sure the arena in Hamburg will be full of Bulgarians cheering me to victory.”

“Pulev has been on my radar for a while now,” said the 32-year-old Chisora. ”He’s a great athlete and he has my respect, but come fight night, I’m not messing around. I’m coming to mess this guy up. I’m going to outwork him and out strength him. I’ll be all over him from the first bell.

“I’m excited for the opportunity. This is a chance for me to prove myself against one of the top fighters in the division and get back into a position to challenge for the world title. I’m in great shape, I’m training harder than ever and I’m ready to go. This is going to be one my best fights ever.”

Promoter Kalle Sauerland said. “We’re delighted to deliver fans this mouth-watering contest between two of the biggest names in the heavyweight division. This is a fight that guarantees excitement.”

Ticket information and undercard details for the ‘Battle of the Giants’ on May 7 at the Barclaycard Arena in Hamburg, Germany will be announced shortly