Canelo Alvarez makes it clear: ‘I’m not a middleweight’ 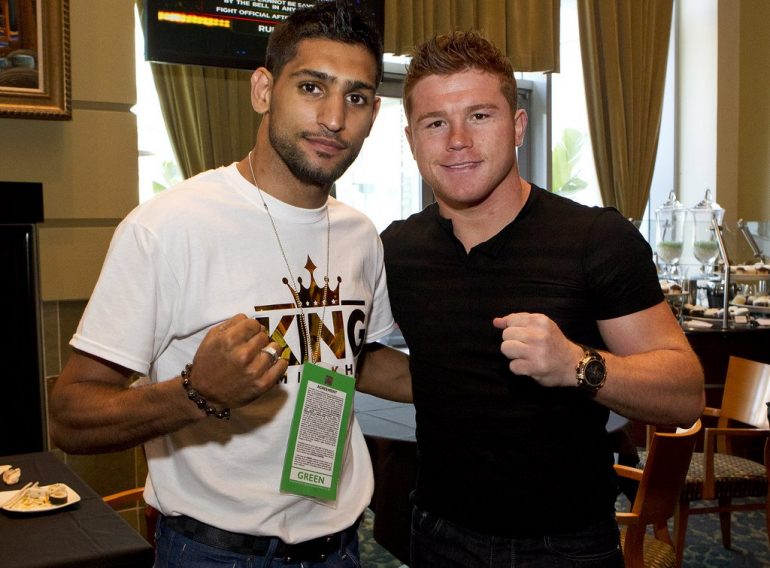 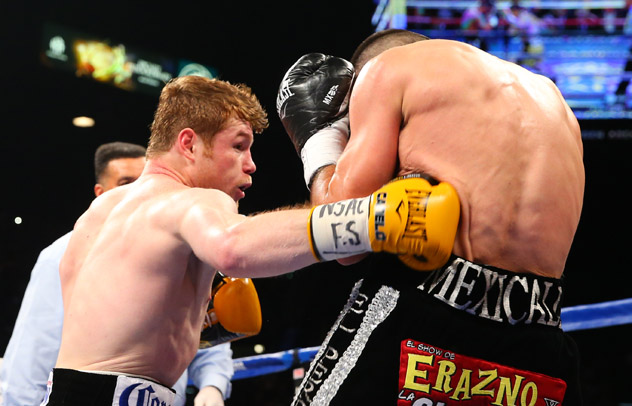 Matters of weight took center stage at a press conference Tuesday in New York City to hype Canelo Alvarez’s defense of his RING and WBC middleweight titles against Amir Khan on May 7 at T-Mobile Arena in Las Vegas. The bout will take place at a catchweight of 155 pounds.

While Khan (31-3, 19 knockouts) seemed to embrace the idea of moving up in weight, going so far as to wonder whether he’s a natural middleweight, Alvarez (46-1-1, 32 KOs) took the opposite approach.

“I’m not a middleweight,” Alvarez said when discussions veered to a potential showdown with IBF and WBA middleweight champion Gennady Golovkin. “I’m a super welterweight. That’s my weight class. I wanted to fight this time for some sort of title at super welter.”

Much has been made of the weight for a potential bout between Alvarez and Golovkin. Alvarez took his middleweight titles from Miguel Cotto at 155 pounds last November. There is speculation that Alvarez will make Golovkin come down in weight if the Kazakhstani wants the fight.

Alvarez didn’t say he would demand a catchweight but repeated that he’s not interested in giving any concessions, a statement that seems to speak of an eagerness to work out the best deal possible for himself.

“Look, I’ve given many concessions,” Alvarez said through Golden Boy VP Eric Gomez, who was translating on a back stage at the Hard Rock Cafe in Times Square. “I’ve given up many advantages. I’ve done it throughout my career to get to this point where I’m at. One thing I’m not going to do, I’m not going to give up any concession or any advantages to GGG. I’m in the position where I deserve and I’ve earned my spot.

Gomez agrees that Alvarez is not a middleweight even though he holds middleweight titles. Golden Boy seemed to be laying the groundwork for the public relations battle ahead of them if Golovkin is asked to come down in weight, something that would be to Alvarez’s advantage but might not be popular with fans.

“There’s a big misconception, people keep calling Canelo a middleweight,” Gomez said. “Look at his record. The highest he ever fought was at 155. He can still make 154 comfortably and he said it all along: Whenever his body feels that he has to make the change and jump, that’s when he’ll do it. He’s not a middleweight. The only reason he became middleweight champion is because he wanted to fight Miguel Cotto.”

As the questions about Alvarez’s future plans at 160 pounds mounted, Gomez put a happy spin on the situation. “The fight is going to happen because it’s going to happen,” Gomez said. “Do you want it to happen?” Gomez asked Alvarez, who said he did.

The question is when. The WBC has stated that the winner of Alvarez-Khan has 15 days to begin negotiations with its interim titleholder, Golovkin (if he beats Dominic Wade on April 23). If no agreement is reached, then a purse bid will be required. Then, if one fighter refuses to fight, he would lose his status as champion or interim champion.

Alvarez has said he wouldn’t mind waiting until 2017 to face Golovkin. He also said on Tuesday he has no plans to vacate the title.

When pressed on fighting Golovkin this year, Alvarez was elusive. “Look, the fight will get made,” he said. “Is it going to happen this year? I don’t know. I can’t say. I don’t negotiate my fights. But if the conditions are right and the conditions are met, all the details of the fight, let’s do it.”

Later, Alvarez cited “so many details that have to be worked out” for a deal to be made. “You can’t just make a fight like that in a couple of weeks,” he said.

Meanwhile, Khan seemed to wrap his arms around the idea of fighting at middleweight for the first time in his career. “I’ve been killing myself coming down to 147 pounds,” he said. “I think time will tell. Maybe Amir Khan was meant to be a middleweight.”

And would he fight Golovkin if he pulls off the upset? Khan smiled and said he was focused on Alvarez.