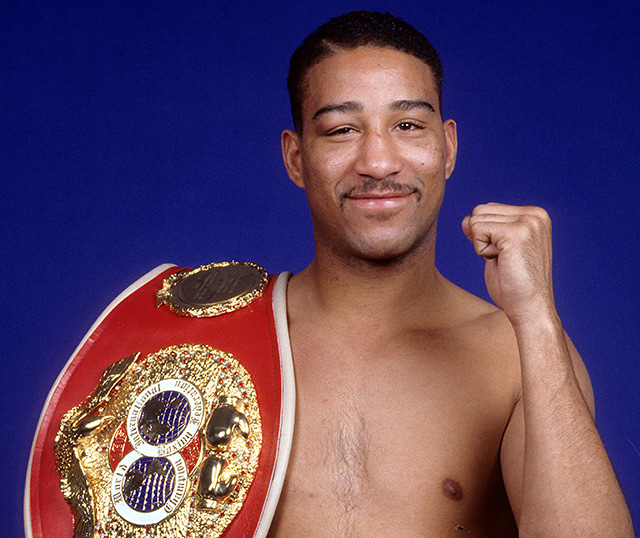 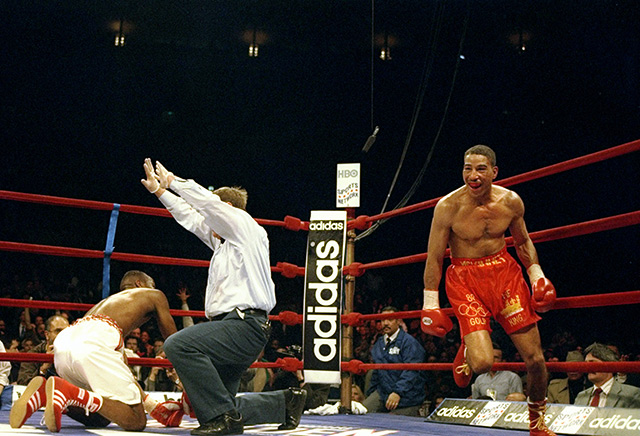 The pinnacle of Kennedy McKinney’s pro career was his KO of Junior Jones in 1997. It was also his last significant victory. Photo by Al Bello / Getty Images

Kennedy McKinney was a hard living two-time junior featherweight titleholder who gave the boxing world some excellent moments, but the Olympic gold medalist may not have lived up to the lofty expectations bestowed upon him when he turned pro.

When McKinney was in the 11th grade he decided to join the U.S. Army. After joining up, the Mississippi native saw a military magazine in the recreation room with two boxers on the cover. It got his attention. He made some inquiries and was put in contact with Kenny Adams who was head of the U.S. Army’s boxing team.

McKinney had boxed as a youngster and was talented but lacked the discipline needed. That was something he would learn under the stewardship of Adams.

“Kenny Adams taught me the proper way to train, how to get into excellent condition,” McKinney told RingTV.com. “I knew how to box but he helped make me better. He changed my feet around a little to get some more power out of my right hand. He gave me the discipline.” 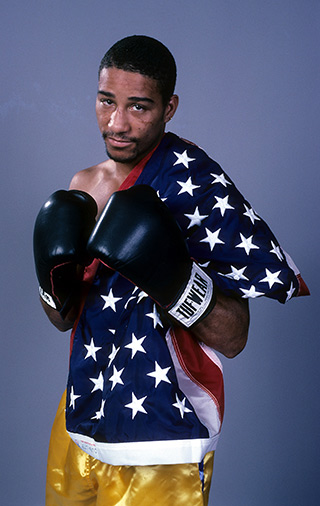 Photo from THE RING

After losing in the finals of the U.S. national tournament (to Arthur Johnson at flyweight and to Michael Collins and Jemal Hinton at bantamweight) for four consecutive years, McKinney finally succeeded and ultimately represented U.S at the 1988 Olympic Games.

The Tennessee resident was given the squad number 0316, it was a cathartic moment in his otherwise chaotic life: “I said to myself, ‘316 John: For God so loved the world, that he gave his one and only Son, that whoever believes in him shall not perish but have eternal life.’

“When I realised the number I was like this gold medal is mine. To me God was in my corner and I was going to win the gold medal, there was no doubt.”

At the ’88 Olympics, McKinney became the only ever American to win gold in the bantamweight class, doing so with considerable ease.

Following the Olympic success he made his way over to the professional game, turning pro in early 1989, and doing so with Coach Adams in his corner. Over the next three years “King” Kennedy moved his record to 19-0-1 with 12 knockouts. He was eager to fight for the world title.

McKinney said he was approached by then-Top Rank Vice President Akbar Muhammad about going a different way. “I found out later on that Akbar had been fired for doing something. He called and said I can get you a title shot so I asked Bob Arum to release me and he did and I fought for the title.”

He traveled to Italy and challenged Welcome Ncita for the IBF junior featherweight crown. McKinney was behind on the scorecards and had been on the canvas but rallied in the penultimate round staging a rousing finish, landing a devastating right hand that knocked the South African cold.
Looking back McKinney says, “My mistake was when I won the title I should have gone back to Arum and I didn’t. I had moved from Las Vegas back to Tennessee and that was part of the mistake I made.”

He reigned for 18 months, making five successful title defenses, beating the likes of Richard Duran (PTS 12), Jesus Salud (PTS 12) and Ncita in a rematch (PTS 12) before being lured to South Africa to face Ncita’s stablemate, the unknown Vuyani Bungu, who won THE RING’s “Upset of the Year” in 1994 when he unseated McKinney on points.

After one comeback win, he met rising star Marco Antonio Barrera (39-0 at the time) on the maiden episode of HBO’s “Boxing After Dark”. Although McKinney put up a spirited effort, getting off the floor five times and dropping Barrera once, he was stopped in the last minute of the 12th round. Despite losing McKinney had enhanced his reputation by pushing the young lion close.
A couple of wins got him a rematch with Bungu who again beat him. In late 1997 he fought Barrera’s conqueror, WBO 122-pound champion, Junior Jones as chief support to Naseem Hamed’s American debut vs. Kevin Kelley at Madison Square Garden.

Both fighters looked to do early damage but it was Jones who struck first, dropping the challenger and appearing to be on the verge of victory before the bell saved McKinney. In the fourth round, McKinney turned the fight on its head, stunning Jones and crowd when he stopped the home town favorite.
He credits that as his best win: “I would have to say Junior Jones. The fact was I had lost to Barrera and he had beat Barrera twice. They called me up and I ended up knocking him out.”

Despite that impressive win he was unable to parlay that into something bigger.

He was inactive for close to a year before getting the opportunity to face Luisito Espinosa for the WBC featherweight title. With his past finally appearing to catch up with him, McKinney, a shell of former self, was stopped in just two rounds.

McKinney would fight on sparingly over the next couple of years before retiring in 2003 with a record of 36-6-1 with 19 stoppages.

McKinney’s former trainer Kenny Adams speaks glowingly of his fistic talents: “I would probably say Kennedy McKinney was the best overall fighter I worked with. He was one of the greatest all-round fighters I worked with, he had everything. He had defense, he had offense, great jab, great right hand, he had a great hook, great body shots, slipped punches, he could move, he could do it all.”

McKinney’s storied past with drugs is his biggest regret in boxing.

“That’s one thing I wish I hadn’t done, he said. “I was messed up for a long time. When I would knock a guy out, I would have a couple of months off and I did (drugs). That’s the only thing about my career, I wish I hadn’t taken drugs.”

Though he achieved a lot in his career, looking back he says, “I wish I would have defended my belt longer, I wanted to make 10, 15 defenses before I lost it. I only did five.”

McKinney, who turns 50 on Jan. 10, lives in Memphis, Tennessee. He has twice been married and has two sons, 24 and 21. He was able to make enough money through boxing that he’s financially OK and says life is pretty good.

He hopes to one day enter the International Boxing Hall of Fame and, most importantly, he is 10 years clean from drugs.

McKinney kindly agreed to speak to RingTV.com about the best he faced in 10 key categories. 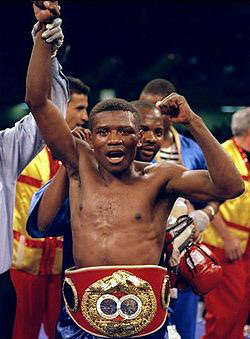 Vuyani Bungu: I would have to say the kid who beat me, Vuyani Bungu out of South Africa. I couldn’t figure it out. He stayed low and was very difficult to hit the first time I fought him. The second time it was different but he still used that same strategy, he kind of fooled me when he came out, he stayed so low. That fight, I remember, I think it was my fifth title defense and I had got big headed and didn’t want to listen to my coach. I didn’t want to train right. I think that fight was my fault, I lost that fight. I don’t think he actually beat me, I beat myself.

BEST CHIN
Sugar Baby Rojas: Oh God, that’s a good one, Sugar Baby Rojas. I beat him for the USBA title. I cracked that kid a couple of times and I’d have to say him. [Barrera] had a chin, I kept cracking that chin, he didn’t move his head well but I kept landing the right hand and he kept walking through it, and I was like damn.

FASTEST HANDS
Welcome Ncita: He was faster than I anticipated.

SMARTEST
Bungu: I didn’t fight no smart guys! The strategy that Vuyani Bungu used by standing so low, he made the smartest move of all the guys I fought. I don’t know if he was the smartest but that move he used by staying really low was a good move, it frustrated me. That was the slickest move anyone put on me. 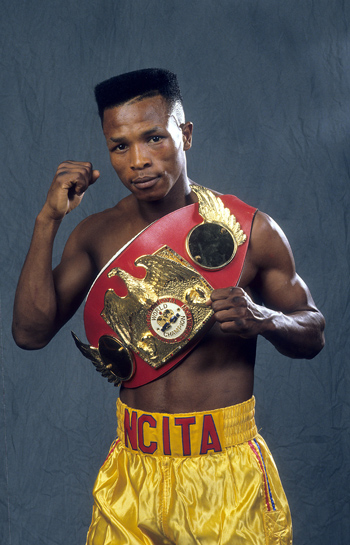 BEST SKILLS
Ncita: I would have to say him. He was overall a good fighter, he was a talented kid, he had all the intangibles. He had a good left hook, too. I learned that! I watched him a few times before we fought and I have to give him credit. Welcome was one of the toughest kids I fought. I’d say he boxed better than anyone I fought.

BEST OVERALL
Ncita: That’s a hard one; Welcome Ncita was the hardest fight I had. He was real good. He was a great champion, he was a boxer, he was quicker than I thought he was. I watched him on film, in two or three of his previous fights, but when I actually got in the ring with him he was a little quicker than I anticipated. He was hard to hit too.