Ronny Rios: ‘I learned from my mistakes’ 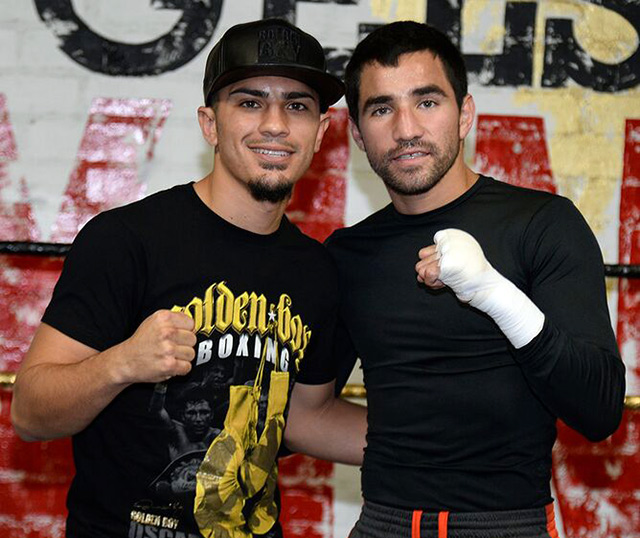 You could learn a lot from a loss. Just ask Ronny Rios.
Just over 13 months ago, Rios was stopped by Robinson Castellanos in the fifth round in Indio, Calif. The loss stopped any momentum his career had built, which included wins over Rico Ramos and Roger Gonzalez.
Rios got back in the win column in his last fight in March but could he score the most significant win of his pro career against his toughest opponent to date on paper?
Rios believes so. He will face Jayson Velez in a 10-round featherweight bout at the Mandalay Bay Hotel and Casino in Las Vegas, Nev.
The bout will open the HBO Pay-Per-View telecast, which begins at 9 p.m. ET/ 6 p.m. PT. In the main event, RING middleweight champion Miguel Cotto and Canelo Alvarez will square off in a 155-pound catchweight fight.
Rios (24-1, 10 knockouts) bounced back from the Castellanos loss with a one-sided, 10-round decision win over Sergio Frias on March 20. While he admitted he was a little gun-shy from the opening bell and did not look his best, Rios believes there was a silver lining in the loss to Castellanos.
“I learned so much from the Castellanos loss,” Rios told RingTV over the phone earlier this week. “I learned from my mistakes.”
He will have to be at his best against Velez. The fighter from Puerto Rico is unbeaten in 24 fights and is coming off a win over Daniel Ramirez on June 4.
Velez (23-0-1, 16 KOs) fought to a split decision draw against Evgeny Gradovich on Nov. 29. He is currently ranked in the top 10 amongst all four governing bodies. He is ranked No. 10 by THE RING magazine.
“I’ve prepared for the best Velez,” said Rios, who is promoted by Golden Boy Promotions and managed by Frank Espinoza. “We’re ready for the Velez that wants to box or brawl. We know he likes to come forward and fight at his own pace. We were actually supposed to fight Velez a few years ago but he turned down the fight.”
Rios has had the reputation of always being in the gym. While Rios says he has trained to the best of his ability for his upcoming fight against Velez, he made a few adjustments that were necessary and critical.
“My approach was different but it was smarter. Sometimes harder isn’t always smarter, especially when it comes to sparring. I learned the hard way. I had a great nutritionist and I rested the right way, which included using bags of ice to relax my muscles.
“I feel mentally and physically strong.”
Rios’ back may be up against a wall. A loss on Saturday would be a significant setback in a career that was very promising early on.
While no one wants a loss on their record, the loss to Castellanos may be the best thing that could have happened to Rios.
A win could elevate Rios into contender status, which would bring more significant purses and bouts on premium networks. There are those who believe Rios may be in over his head against Velez but Rios shrugs off the criticisms.
“I just ignore it. I pay no attention and I’m focused on the fight. Nothing can motivate me more than winning on Saturday. I’m not overlooking him at all.
“I’m real ready for this. I won’t be making any excuses. I’m prepared for this fight.”
Francisco A. Salazar has written for RingTV since Oct. of 2013 and has covered boxing in Southern California and abroad since 2000. Francisco also covers boxing for the Ventura County (CA) Star newspaper, Boxingscene.com, and Knockout Nation. He can be reached by email at [email protected] or on Twitter at FSalazarBoxing.