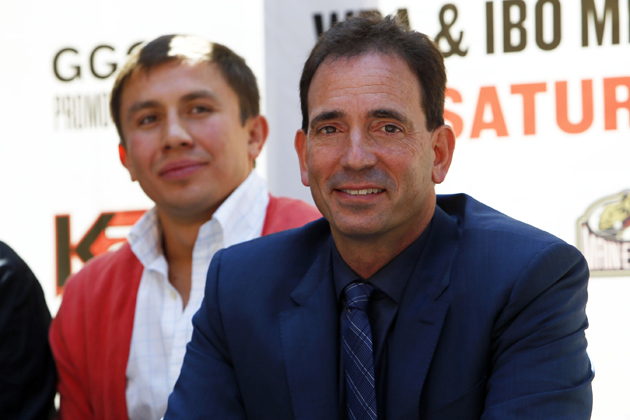 Fans would love to see the winner of Saturday’s super-fight between RING middleweight champion Miguel Cotto and Canelo Alvarez in a ring with middleweight titan Gennady Golovkin.

But ughh…reading between the lines – heck, reading the actual lines – it’s feeling like that won’t happen any time soon.

A story running on ESPN Deportes talks about Golovkin possibly going to a judge to get Cotto to pony up a supposed $800,000 “step-aside” payment promised because Cotto was mandated to defend his WBC 160-pound crown against the organization’s No. 1 contender, Golovkin. But he decided to fight a guy not ranked No. 1, Canelo, instead. To smooth waters, often, in such cases, a step-aside fee is paid to the “stepped over” fighter. And Golovkin was supposed to get that…and then Cotto balked at the whole construct…the step-aside fee, the sanctioning fee. So, maybe, lawyers will help sort it out.

I chatted lightly with Golovkin promoter Tom Loeffler yesterday and today. First, I wondered what he thought about Team Cotto saying they want to beat Canelo, then lure Floyd out of hiatus for a rematch. “That’s up to Cotto,” Loeffler said, “but that would be a great fight for him at 155.”

That was an exceedingly measured response, being that Loeffler has been aiming for a Cotto vs. Canelo winner versus Golovkin clash for a long spell.

Sooo, does it seem like neither Cotto nor Canelo is sending signals they would fight “GGG” next when and if they win Saturday? “I can’t speak for either of them,” Loeffler said.

Then I asked about that lawsuit story. “There’s really nothing to comment on,” he said.

Hmmm…I can’t know what’s fully going on in Loeffler’s head. Is he being hesitant to speak in the same way someone is when he has a lawyer telling them to be non-committal? I’d say yes…but again, I do not know his deepest thoughts.

So, we are left to theorize…Friends, how do you think this will play out?

“There’s really nothing to comment on,” replied Michael Woods when asked who would win between he and Loeffler in a battle of giant squeaky hammers. Some men were just born with silent confidence.