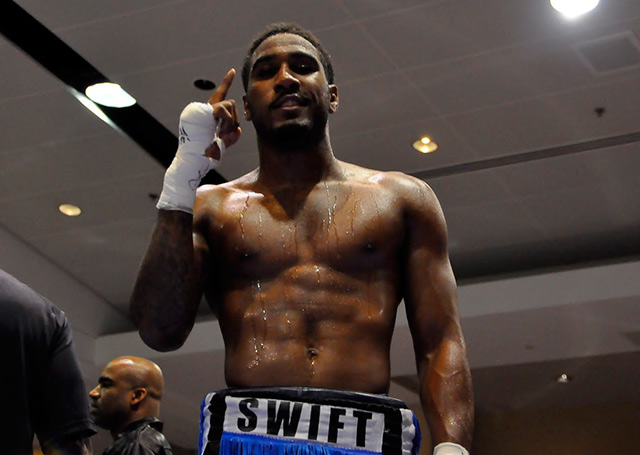 LAS VEGAS — In a battle of unbeaten junior middleweight prospects, Jarrett Hurd put together a masterful performance to earn a sixth-round TKO over Frank Galarza in the main event of “ShoBox: The New Generation” that emanated from the Hard Rock Hotel & Casino on Saturday.

It was evident from the outset that it would be Galarza’s pressure versus Hurd’s counterpunching and speed. But the latter proved to be dominant on this night. Hurd fought well behind a sharp jab and movement that refused to give Galarza an easy target to hit. Hurd mixed things up well by landing to the body and slow down Galarza’s advances in the second round, which set the stage for what would take place in the subsequent rounds. The third saw Hurd find a home with a beautiful counter right hand that repeatedly cracked the New Yorker as Hurd would vanish before Galarza could answer. As Galarza continued to press forward, Hurd found creative ways to make space behind the counter right and slick body punching.

By the fourth round, Hurd seemed to have Galarza figured out and shifted to the offensive. After briefly stunning Galarza with yet another counter right hand, Hurd would unleash a vicious three punch combination that had Galarza on shaky legs. Hurd then took complete advantage of the situation by unleashing a hellacious uppercut that nearly lifted Galarza out of his shoes and sent him to the canvas. Fortunately, for Galarza, the round was coming to a close as Hurd sought to close the show but the bell managed to get into the way.

With no Plan B in sight, Galarza gamely pressed forward in the fifth hoping that things would change but Hurd was simply too sharp and far to “Swift” as his nickname suggested. Mixing in the counter right with combination punches kept Galarza behind the proverbial 8-ball. Hurd went on the offensive in the sixth as he doubled and tripled the jab. Galarza’s goose was cooked and Hurd assaulted him with combinations that shredded down Galarza and forced referee Russell Mora to call a halt to the fight 59 seconds into Round 6. With the victory, Hurd improves to 17-0 while collecting his 11th knockout and Galarza fell to 17-1-2.

It was quite the impressive performance from the fighter from Clinton, Maryland and it looks like he could cause some trouble for his fellow 154-pound opponents in the near future.

Ukrainian Olympian and unbeaten prospect Sergiy Derevyanchenko waited patiently for his openings and annihilated the game but severely overmatched Jessie Nicklow with a third-round stoppage to improve to 7-0 (5 KOs). In the early stages, Nicklow attempted to get into his opponents head by posturing whenever Derevyanchenko landed to the body. But the pinpoint accuracy began to pile up as the former Olympian placed power shots into the narrow openings that Nicklow presented. All the posturing by Nicklow (25-8-3) was blown to bits in the third as the Ukrainian slammed body shots, lifted his foe’s neck with nasty uppercuts and unloaded the entire kitchen sink onto his opponent. Nicklow somehow remained upright but the vicious assault caused a merciful halt to the bout at the 2:18 mark.

Hot prospect David Benavidez put on a scintillating performance as he scorched Felipe Romero en route to a first-round TKO in light heavyweight action. It didn’t take long for Benavidez to find his range and he walloped Romero with a left hook that sent his Mexican opponent careening to the canvas. Although Romero would rise, it was probably against his best interest as the blitz continued until a Benavidez left hook dug hard into the body and sent Romero down to a knee. Again, Romero would get to his feet again but the rest was elementary as Benavidez lit Romero up with body shots and closed the show with a left hook. The stoppage from referee Robert Byrd came at the 2:00 mark as Benavidez, who is only 18, improves to 11-0 with his 10th knockout. Romero fell to 15-10-1.