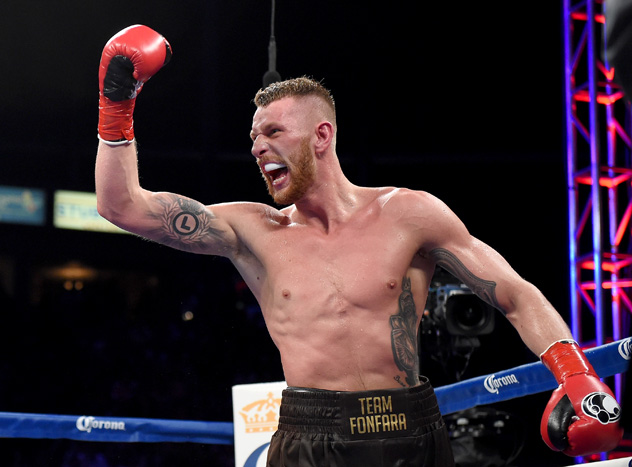 CHICAGO ÔÇö Andrzej Fonfara and Nathan Cleverly stepped towards each other and locked eyes in an intense stare down. As photographers took photos for Friday’s showdown at the UIC Pavilion, Warriors promoter Leon Margules instructed the two light heavyweights to shift positions, but the two stood still.

For another 30 seconds, the two refused to back down.

“I want to see Cleverly in the best shape of his life,” Fonfara said. “I want to beat Cleverly, even knock him out if I have a chance.”

To say Fonfara’s life is different since the biggest win of his career ÔÇö a ninth-round stoppage over Julio Cesar Chavez Jr. ÔÇö would be an understatement. Fonfara jokes he’s always liked wearing nice clothes and watches, the Ray Ban sunglasses and the Braitling watch he wears certainly support that, but there are undoubtedly other perks that come from gaining notary after dismantling a near-household name in boxing. The 27-year-old got engaged and his entourage grows with every press conference.

But more so, Fonfara has established himself as an A-side. He’s taken advantage of Chicago’s large Polish community by becoming a sizable draw and is again headlining a card in his adopted hometown, this time being televised on Spike.

Even in the ring, Fonfara has dramatically improved. He said he feels sharper and has better footwork since his May 2014 unanimous decision defeat to THE RING champion Adonis Stevenson.

“I think I’m a better guy right now from boxing all those fights,” Fonfara said. “I meet new people and meet new connections. I’ve got more followers on Instagram, Facebook and those social media things.

“But I think I’m the same Andrew (outside the ring) than before.”

But negotiating wise, it is a stark contrast than when Fonfara was offered two years ago to travel to Wales to fight Cleverly for the WBO title. Margules said Fonfara turned the fight down because the purse was too small.

“Andrew is now controlling his own destiny. He’s in that position where as long as he continues to win, he’s very involved in what he wants,” Margules said. “He wanted to fight Cleverly. He couldn’t get Stevenson again. [Chavez] wouldn’t fight him again at his weight. He can’t fight Kovalev because (Kovalev) an HBO fighter, exclusive to an HBO contract. [Al] Haymon is giving him a main event. ‘Who do you want to fight?'”

The circumstances, however, have also changed for Cleverly. While Fonfara has sought out Cleverly, the feeling wasn’t exactly mutual. The Welshman said he chose Fonfara because there was a higher-risk, higher-reward element to the fight than fighting WBA titlist Jurgen Brahamer, a fight he was also offered.

At 28, Cleverly knows far too well about what he calls the “peaks and troughs” of the boxing world.

In 2013, Cleverly was utterly outmatched against Sergey Kovalev and was knocked out in four rounds. Since then, Cleverly had a three-fight venture to cruiserweight where he lost to domestic rival Tony Bellew in a 12-round decision.

Cleverly went from a promising, young fighter who had a world title at 24 to having to rebuild his image.

“It’s not easy outside the ring [as world champion] because there’s a lot of media and hype,” Cleverly said. “You get a lot of attention and it can be overwhelming sometimes. Where as now, I’m not world champion. Things are a little bit more peaceful. I’m enjoying the downtime actually.

“But ultimately, as a fighter, I want to be world champion again.”

There’s honesty in Cleverly’s tone. He admits his enthusiasm for boxing has cooled, viewing it more as a job than he did when he was younger. Despite that, Cleverly said he still feels like he’s in his prime.

Cleverly said he’s aware of the buzz surrounding Fonfara, but his skills will be enough to top him.

“He’s on the fringe of elite level,” Cleverly said. “He’s not quite a Kovalev or a Stevenson. But he’s a good fighter. He probably does justify the hype, but at the same time, he’s beatable.”

Fonfara said is well prepared for Cleverly’s speed and ready for the fight. “The Polish Prince” is eager to perform, but admitted there was extra motivation with the crowd of rabid Polish fans there to see him.

“I can say it’s now my town,” Fonfara said. “Everything here motivates me and I’m excited to fight here. I want to show people I can beat Cleverly and take the next step in my career.”

But if Fonfara loses, it would be a notable setback in his career. Fonfara is a sizable favorite, but it’s the exact sort of gamble that motivated Cleverly to take the fight.

“The potential risk is if you lose and the potential for a title shot in your next fight,” Cleverly said. “You’ve got to work your way back up which takes time. And you lose, mentally you question yourself. ‘Can I ever become world champion again?’

“So there’s a lot to overcome if you lose. There will be questions if you can ever reach the tops again. You could say it’s make or break.”