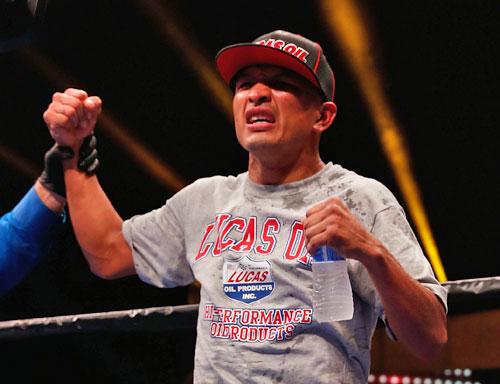 GLENDALE, Ariz. – Devon Alexander wanted to have some fun.

No fun in losing.

Alexander’s hopes at restoring The Great to his nickname and career quickly came undone Wednesday in losing a unanimous decision to Aron Martinez in an ESPN-televised bout on a Premier Boxing Champions card at Gila River Arena.

The Great is gone, long gone, in Alexander (26-4, 14 knockouts), who was left to ponder the same doubts he had 10 months ago after losing to Amir Khan.

“Consecutive losses are tough but I’m not easily discouraged,” Alexander said. “I just need to regroup and then we’ll see what’s next. I’m still considered one of the best.”

“I’m the heavier guy,” said Martinez, who believes he was robbed in split-decision loss to Robert Guerrero in his last outing. “I’ve always fought at 147 pounds. This is my natural weight and I sparred against much bigger guys during the last few weeks of training camp. I was facing fast 180-pound fighters in camp to get ready for this.”

His heavy hands made Alexander’s new beginning look like the end.

Martinez pounded away at him, turning the 10 rounds into a grind-it-out affair. The Mexican, who lives and trains in Los Angeles, landed body shots. Landed upper cuts. Landed just about anything he wanted to, especially in the last couple of rounds. In the eighth, he caught Alexander with a straight right hand that lifted Alexander up and onto the ropes.

The first half of the bout was full of holding, leaning and boos. The customers weren’t happy with the pace and style.

Alexander, perhaps showing some rust from his 10-month layoff after the loss to Khan, displayed none of the speed and overall athleticism that was there in the bygone years when he still could call himself The Great.

In a lightweight bout televised by ESPN3, the Robert Garcia-trained Ivan Redkach (19-1, 15 KOs), a prospect from the Ukraine, overwhelmed Erick Martinez (11-3-1, 5 KOs), scoring a third-round stoppage of the over-matched Mexican.