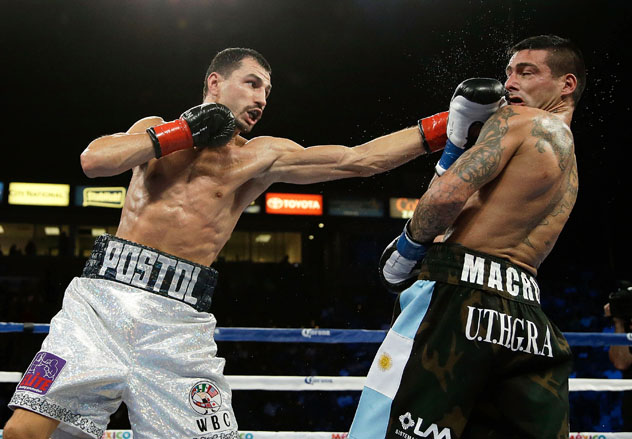 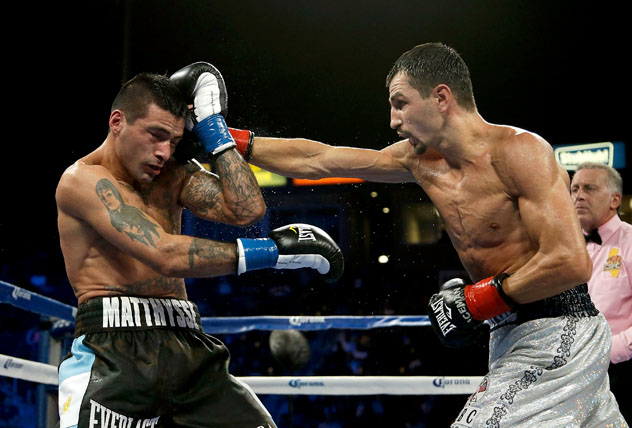 CARSON, Calif. – This was supposed to be Lucas Matthysse’s night, the night he would finally emerge with an elusive world title.

Viktor Postol, his opponent, was a mere prop, a capable but light-punching Ukrainian who would box a little but ultimately collapse under the weight of Matthysse’s ferocity and vaunted punching power. If ever a fighter was doomed, most observers agreed, it was him.

And then the opening bell sounded.

Postol made it clear from the beginning that he was no easy mark, using his long jab to keep Matthysse at a distance, following with power punches here and there and doing whatever was necessary defensively – moving, holding, anything – to avoid being hit.

That formula frustrated Matthysse all night as he simply couldn’t get to Postol with any consistency.

The hard-charging Argentine did have his moments, landing on occasion the big right that so many people figured would decide this fight. That gave him hope that he could overcome the tall, sturdy Eastern European obstacle before him and fulfill expectations.

Postol was never hurt but the judges were impressed enough with Matthysse that the scoring was tight through nine rounds: Two of them had it 86-85 for Postol, the third had Matthysse by the same score. (I had it 87-84 for Postol.)

None of that mattered toward the end of the 10th round. The first 2 1/2 minutes were uneventful and then, in the final seconds, Postol landed a short, straight right that knocked Matthysse to all fours with his head hanging. The fans at StubHub center — many of whom repeatedly chanted “LUCAS! LUCAS! LUCAS! — were stunned as referee Jack Reiss began his count.

It seemed as if Matthysse would be able to get up. He didn’t. Reiss actually reached the count of 10, signaling the end of a dramatic night two seconds before the end of the round.

Postol, the prohibitive underdog, was a knockout winner and the new WBC junior welterweight titleholder – his first major belt. 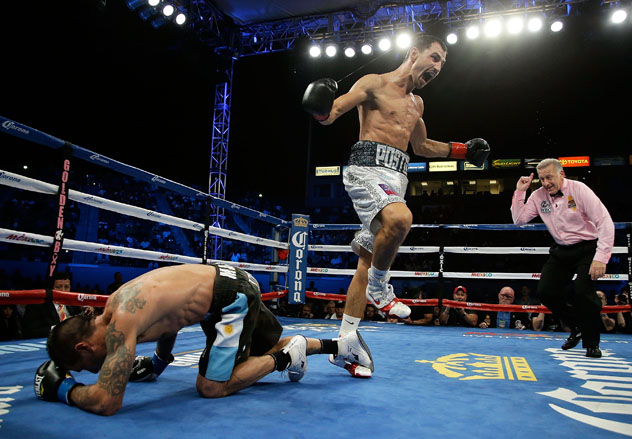 “This is the ultimate goal,” Postol (28-0, 12 knockouts) said afterward. “It’s something I’ve thought about since I first walked into the gym in Ukraine, outside Kiev, when I was 12 years old. I always wanted to be a world champion.”

His veteran trainer, Freddie Roach, said, “This is one of the biggest wins I’ve ever had.” Said Bob Arum, his promoter: “(Postol) has a difficult style. He could be a force at 140 (pounds) or 147. We can make a lot of big fights with him. He’s hard to beat.”

It was a bitter disappointment for Matthysse, who has never held a major title in spite of considerable success.

And, undoubtedly, he’ll have a particularly difficult time swallowing the manner in which he failed to take advantage of this opportunity. The image of him on his hands and knees as Reiss completed his count is an indelible black mark on his otherwise fine career.

Matthyssee said afterward that he could’ve gotten up but didn’t to protect his injured left eye, which obviously was swollen and bruised as he left the ring.

“I felt something pop in my eye,” he said. “I wanted to take care of my eye. I could’ve gotten up but I stayed down to protect my eye.”

Many of those who watched the fight will wonder whether he was telling the entire truth, though.

Matthysse had the body language beginning a few rounds before the knockout of a beaten fighter, one who knew his mission was hopeless. He went through the motions but no longer fought with a sense of urgency. A premature ending would be a blessing. And then it came.

Only he knows if he took advantage of the knockdown to spare himself any more frustration but that’s what it looked like.

The only thing we can say with certainty is that Postol should never have been overlooked by anyone.