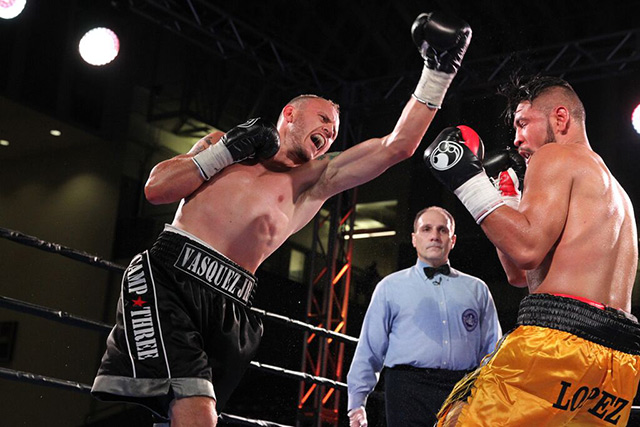 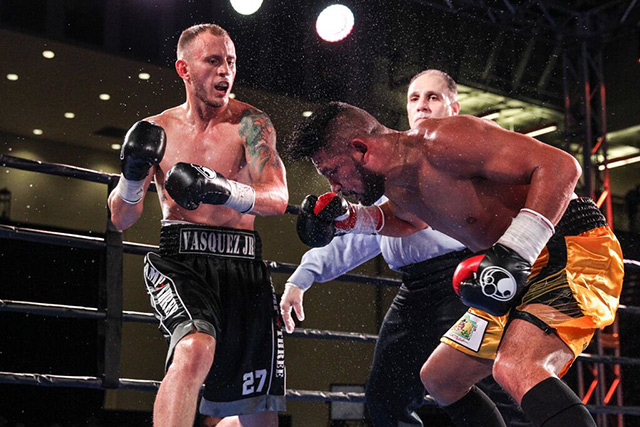 The following press release was issued by Premier Boxing Champions:

Sergeant Sammy “The Who Can Mexican” Vasquez (20-0, 14 KOs) put on a show Tuesday night for his hometown fans on his way to fifth-round stoppage of Jose “Piston” Lopez (25-4-1, 15 KOs) on Premier Boxing Champions (PBC) TOE-TO-TOE TUESDAYS on FS1 and FOX Deportes from the Convocation Center at California State University of Pennsylvania in California, PA.

Vasquez came out strong from the start, beating the hard-charging Lopez to the punch consistently in the early rounds. In the fourth round, Vasquez wobbled Lopez several times with hard combinations.
In the fifth round Vasquez took over the fight, dropping him early in the round with another flurry. Lopez was able to barely beat the count, but only lasted a few moments longer when Vasquez dropped him with another combination, prompting referee Gary Rosato to put a halt to fight 1:08 into the round.
Vasquez was dangerously effective with his power punches, landing 108 out of 189 thrown, giving him a 57.1 percentage with those punches. The hometown favorite had won every round on the judges’ scorecards at the time of the stoppage.
In the opening televised bout, Omar “Super O” Douglas (15-0, 11 KOs) remained undefeated by beating Braulio Santos (22-2-1, 15 KOs) by unanimous decision in a rough and tumble fight. Both men were deducted a point over the 10-rounds, with Douglas losing a point in round four for hits behind the head and Santos being deducted for low blows in round seven.
Douglas started the fight fast, attacking the body and earning a first round knockdown with a stiff jab that caught Santos off-guard. Douglas followed that up in round two, connecting on a left hook that sent Santos to the canvas.
Douglas had a decided advantage in power punches landed with a 165-117 discrepancy, per CompuBox. The final judges totals were 99-87, 97-89 and 96-90.
SAMMY VASQUEZ
“He was real wild and the last thing I wanted was to get caught with a lucky shot. His body was wide open every time he came with the right hand. When he came in with the double right hand he left his ribs wide open.
“I wanted to key-in on the body, but his head was right there. He bent over and was ready to take punches.
“I was ready for him and I put the speed combo on him and it was over. I knew I was going to get him out of there.
“I rolled with the punches with him. He was leaving himself wide open. He got tired after he tried to get me on the ropes. Once I popped him with a couple uppercuts and a hook, I knew I hurt him.
“He came forward, he was very tough. He just wanted to punish me but I keyed in on my opportunities and got him out of there.
“I knew I could get him out of there because of the type of fighter that he is and the skill-set that I have and that’s what we did.
“Everybody in front of me is on my mind. I can only get to the top by beating the people in front of me. I’m not calling out any names, because I want every person ranked in front of me. I want everyone.”
JOSE LOPEZ
“I wanted to attack the body and put some pressure on him from the first round.
“He moved very well side-to-side. He is a very good boxer.
“I am very disappointed. I came here to win.”
OMAR DOUGLAS
“The jab is always a great weapon for me. He gave me more head movement after I was landing the jab. I tried to use the jab to the body and hurt him a few times. He was so short I had trouble throwing body shots.
“On the second knockdown I feinted the jab and got him with the left hook. I should have done that all night. There were a lot of opportunities for me.
“It was a tough fight. It was the kind of fight that I needed. I haven’t had a tough fight like that in a long time.
“He laid in the middle, a bit of a rough guy. He was head butting, pulling and everything. When we got inside we banged heads a lot. The ref was saying I was hitting on the top of the head, but he was coming in so low.
“I’ve done much better work before, he definitely gave me a tough fight, but I expected it.
“I want to fight guys with winning records. I expect tough fights. I’m 15-0 now and I expect challenges.”
BRAULIO SANTOS
“It was a hard fight. I’m not sure that I won, but I thought it was closer.
“I didn’t have that long to train and this is not a weight I usually fight at. I’d like to fight him again and have more time to prepare.”