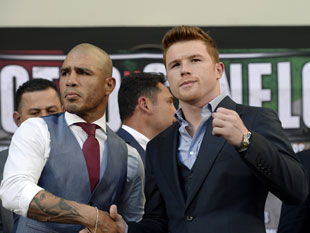 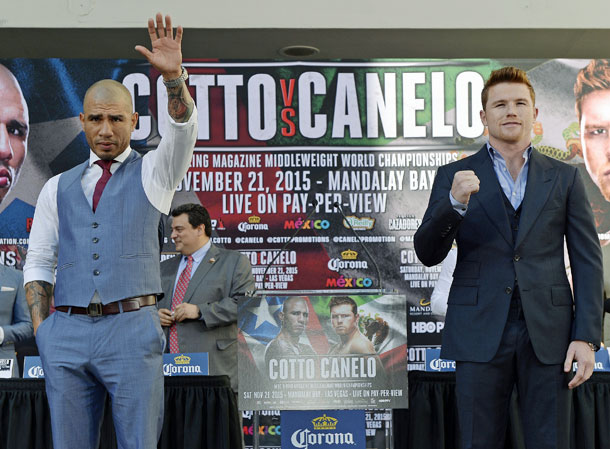 HOLLYWOOD, Calif. – The repeated chants of CANELO! CANELO! CANELO! and the boos that rained down upon Miguel Cotto on a warm, cloudless day here made one thing clear: This is Canelo Alvarez’s town.

The passion that prompted the chants and boos made another thing obvious: This is a fight that already has taken hold of the fans.

The scene was the first press conference to promote the latest installment of the storied Puerto Rico-Mexico rivalry, which is scheduled for Nov. 21 in Las Vegas. About a 1,000 fans – and perhaps some puzzled tourists who happened to be there – packed the multi-level, outdoor Hollywood and Highland Center in the heart Tinseltown. 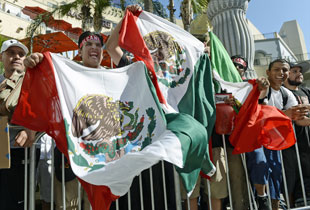 Of course, in light of the large Mexican-American population in Los Angeles, most were there to see their red-headed idol from Guadalajara as he embarked on the most important journey in his career.

And their support is absolute: Only love for Canelo and only disdain for his opponent even if they respect Cotto privately. Why?

“He’s just a strong, KO artist who ducks nobody. He’s a great fighter. He’s the Mexican hero now,” said an excited Daniel Vega, an amateur fighter who waved a Mexican flag and wore a red, C-A-N-E-L-O headband similar those once worn by another icon, Julio Cesar Chavez.

Alvarez, always careful with his words, accepts such praise with great humility and a sense of responsibility.

The former junior middleweight titleholder won’t guarantee a victory over Cotto, for whom he has great respect. He said repeatedly and in many different ways that he would simply do his best even when reporters tried to goad him into saying something controversial.

“In what round are you going to knock him out?” asked one of about 20 reporters at a round table before the start of the press conference. 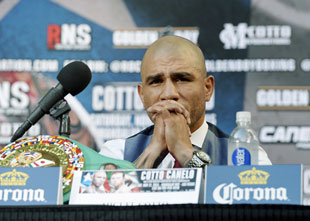 “I don’t like to predict knockouts. I’ll just prepare well for this fight and be ready for anything,” Alvarez responded politely through a translater, deftly avoiding any potential trouble.

At the same time, he acknowledges the magnitude of the fight and his role in it. Another reporter quoted WBC President Mauricio Sulaiman as saying he has put the future of Mexican boxing in Alvarez’s hands, to which he replied, “Wow. That’s a big honor for me. I’m happy. It’s a big responsibility. I’ll do the best I can to honor that.”

And let there be no doubt that this is the biggest fight of Alvarez’s career. His one-sided loss to Floyd Mayweather Jr. in 2013 was a huge event but he entered that fight as a decided underdog with relatively little to lose.

Alvarez will be the favorite in another huge event on Nov. 21, one in which a victory – particularly a dramatic one – could propel him to the top of the sport as Mayweather nears the end of his career.

Cotto later sat down at the round table with a different mindset.

The RING and WBC middleweight champ, who will be defending his titles at a 155-pound catchweight, did predict a victory (although not too brashly) and wouldn’t acknowledge the significance of the event. He described it as “just another fight.” And he would barely acknowledge Alvarez at all.

Cotto is focused 100 percent on what he has to do to win, not on his foe, the odds, anyone’s opinion or anything else.

A reporter asked what he believes those who favor Alvarez see. “I don’t know and I don’t care,” he said.

Another reporter asked whether he has had an eye on fighting Alvarez for a long time – the fourth or fifth question about Alvarez during his portion of the round-table interview – and he sighed out of frustration before dutifully responding. 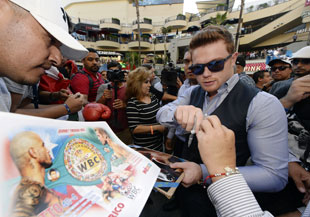 Of course, this isn’t “just another fight” for Cotto. The money alone – a guaranteed career-high $30 million for him ($10 million for Alvarez) – sets it apart from any of his previous big fights. And a victory would punctuate one of the more remarkable turnarounds in recent memory, the product of a fruitful association with trainer Freddie Roach.

Cotto’s future seemed to be bleak after he lost back-to-back fights in 2012, to Mayweather and then Austin Trout. That’s when he turned to Roach, who has guided him to consecutive knockout victories over Delvin Rodriguez, Sergio Martinez (for the middleweight titles) and Daniel Geale.

It seems Cotto, 34, feels fortunate to be in this position at all.

“I came to Freddie almost two years ago with nothing in my hands,” he said. “ÔÇª Freddie rejuvenated me, he made me the way I used to be. Everything (that has happened since) is because of him.”

How much trust does Cotto have in Roach?

A reporter told him that Roach predicted his fighter would win by a late-rounds knockout. Cotto responded, “If Freddie believes it, I believe it.” Another mentioned that Roach suggested Canelo can be lazy. Cotto said, “If Freddie said that, I’m going to believe him.”

Those are the words of a grateful fighter, one who believes again in himself by believing in his mentor.

That’s not necessarily enough to beat Alvarez, though. Neither is Alvarez’s fan support, which should bubble over at the Mandalay Bay Events Center on fight night, enough to take down a proven commodity like Cotto.

This is a clash between a boxer with more polished skills and a significant edge in experience (Cotto) and a quicker, more athletic and probably stronger young fighter who also has put together an impressive run since the Mayweather fight (Alvarez). Alvarez, 25, is favored but no one sees this as a blowout.

In fact, it’s about as intriguing as any possible matchup in the sport. Throw in the star quality of the participants and that Mexico-Puerto Rico rivalry and you understand the fans’ enthusiasm for this make-or-break fight.

Oscar De La Hoya, Alvarez’s promoter, said before the fighters had their round-table interviews that, “If Canelo wins, he’s the man,” meaning the toast of boxing. The same applies to Cotto.