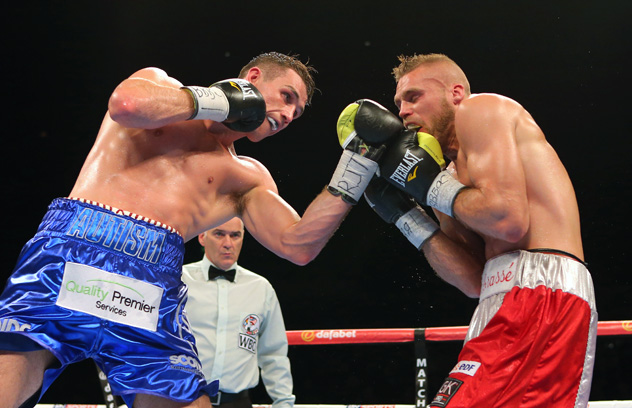 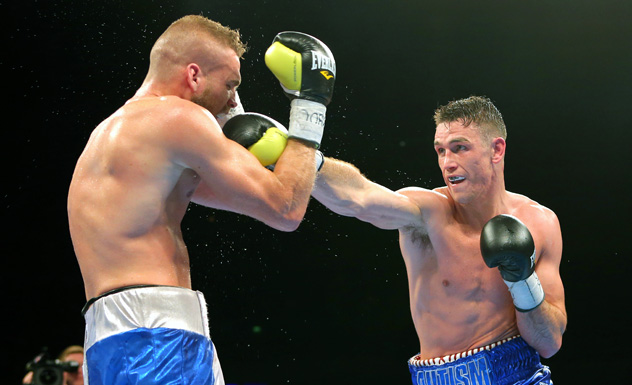 Callum Smith (R) punches his was through Christopher Rebrasse’s guard on June 26, 2015, in Liverpool. Photo by Dave Thompson/Getty Images

Smith, who is rated No. 10 by THE RING at 168 pounds, opened cautiously and began working behind a strong left hand. As the round progressed he began adding layers to his performance but Rebrasse rose to the occasion, particularly in the middle sessions, and tested his man throughout.

The turning point was a quality left hook to the liver in the 10th which dropped Rebrasse. This reporter had Smith winning well but his opponent seemed to be a lot more competitive than the scoring suggested and the Liverpool man’s post-fight comments confirmed that.

“Rebrasse is very tough and I give him a lot of credit,” said Smith. “I felt comfortable in there and I gained a lot of experience.”

Smith (17-0, 12 knockouts) is now penciled in to face local rival Rocky Fielding in September for the vacant British title but given both men’s respective world rankings, the likelihood is that clash will be put on hold until there is more at stake.

There are many British fans convinced that Smith is the future of the division. The hard-hitting 25-year-old is rated No. 3 by the WBC and will be an interested observer when countryman George Groves challenges newly minted titleholder Badou Jack in August.

Rebrasse, a solid competitor, has never been stopped in an eight-year professional career and will still be a solid force at the European level. 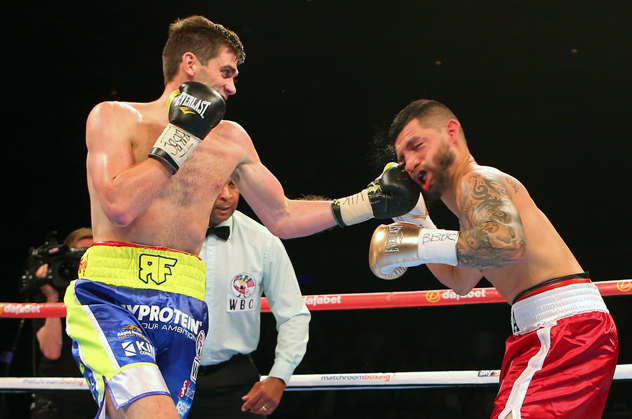 Emerging super middleweight Rocky Fielding made a statement of his own with a second-round stoppage of American veteran Bryan Vera and kicked open the door to more big fight opportunities.

Fielding (21-0, 12 knockouts) has not been a focal point of the fight fraternity when it comes to 168-pound supremacy but he is posting eye-catching results. The Liverpool man decked Vera with a right hand, left uppercut combination in the opening round and another bevy of blows seemed to have the American off balance in the second.

There was confusion when the ringside timekeeper began counting because when Vera got back to his feet Fielding was still there battering him with power shots. The visitor went down heavily and from ringside the referee, Iain John Lewis, appeared to lose control. The fight ended seconds later when Vera was staggering on the end of a follow-up assault.

“I was expecting a very tough fight,” said Fielding. “I was nervous in the dressing room but I know I carry power and if I catch an opponent clean, then I can cause some damage. That is exactly what happened.”

Fielding is rated No. 6 by the IBF and informed this reporter recently that he would be open to a showdown with titleholder James DeGale. Both men are promoted by Matchroom Boxing and a showdown between the pair would be eagerly anticipated on U.K. shores.

Vera, best known for pushing Julio Cesar Chavez Jr. to the limit in their first encounter, falls to 23-10 (14 knockouts). If he is to continue with his career then a step back to middleweight looks like the best option. There was a noticeable size advantage for Fielding and the American seemed unable to put a dent in his man.