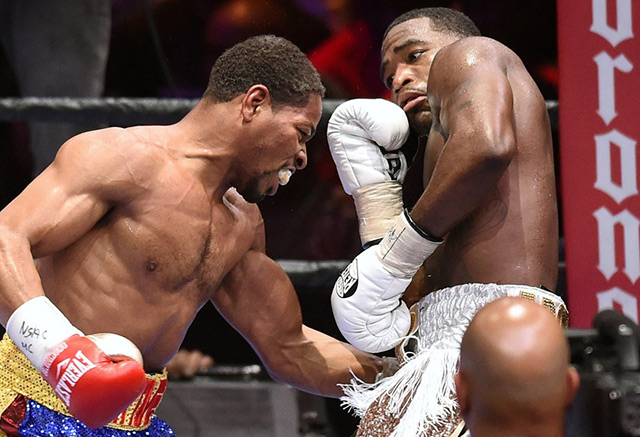 With his home state rival, Adrien Broner, squirming in defeat in his rearview, “Showtime” Shawn Porter has his sights set on bigger and better things for his boxing future. And if you need it to be spelled out for you, that would mean a September showdown with Floyd Mayweather Jr.

It makes sense considering that Porter put together a dominant performance – aside from being knocked down for the first time in his career – against Mayweather’s fictional little brother. And history does tell us that Mayweather has a knack for defending the honor of his fallen friends.

At the post-fight press conference, Kenny Porter, Shawn’s trainer and father, was very vocal about landing a fight with Mayweather, who was in attendance at the MGM Grand Garden Arena for Porter’s unanimous decision victory over Broner.

“We did ‘The Battle For Ohio’ and now it’s time for ‘The Battle For Vegas,'” the elder Porter said at the podium with Mayweather Promotions CEO Leonard Ellerbe seated behind him. “We live on the same street, about a mile and a half from Mayweather. Don’t ignore us and avoid the elephant in the room. Let’s do it.”

Mayweather, who was holding court outside of the media tent moments earlier, systematically shut down the idea of facing Porter.

“No, that won’t happen,” Mayweather said. “He can fight on my undercard in September.”

Although it could be viewed as a dig, Mayweather already had an idea of who Porter should face next, and he was standing right next to Mayweather.

“I already said that I would be relinquishing all of my titles, except the WBO title I won from Pacquiao but still haven’t received,” Mayweather said. He currently holds the WBA (“super”), WBC, Lineal and The Ring welterweight titles. “So on the undercard of my September fight either Shawn Porter or Keith Thurman can fight Errol Spence Jr. for one of those titles.”

Spence Jr., who looked impressive in victory as he dispatched of Philip Lo Greco in three rounds, is touted as the biggest welterweight prospect in boxing. Stories of how he gave Mayweather and Broner fits in sparring leaked out years ago and it appears that the hype may be justified for the 25-year-old 2012 Olympian.

But that’s not the fight Porter wants next. When the idea was brought up to him after the fight, Showtime smiled, shook his head and dismissed it.

“I’m not looking to be on any Mayweather undercards,” Porter said. “I was trying to get on the Mayweather-Pacquiao undercard but that didn’t happen so I’m only looking at Mayweather moving forward. I’m not trying to be on his undercard and watch him fight after me.”

It will be interesting to see how this all shakes out. Mayweather continues to troll the boxing community with his suggestion that he’ll face Andre Berto or Karim Mayfield in his next fight so it’s highly unlikely he will tip his hat on who his September opponent will be until the day he announces it. If Mayweather isn’t in Shawn Porter’s future and he is truly uninterested in facing Errol Spence Jr., perhaps a showdown with Manny Pacquiao is in the cards?

After all, there have been stories about Porter having his way with Pacquiao when he was brought in to be a sparring partner. Word that Porter put Pacquiao on the canvas also leaked out and when brought to Porter’s attention by a reporter, all he could do was smile. “Who told you that?” he asked.

“Yeah, that’s definitely a fight I would want,” Porter said without giving any additional insight on what happened when he sparred with the Filipino. But with Pacquiao on the shelf with an injury the fight wouldn’t happen until next year. And if Porter wants to stay busy, he’ll have to fight somebody in the interim. Avenging his only loss sounds good too.

“I don’t think I should have lost but there were things I did wrong that I should have done right,” he said. “If I got a second chance I’d do everything just about the right way to win.”

As you can see, the options are plentiful for Shawn Porter. But who will be willing to face him?