IBHOF inductee Steve Smoger has seen the world thanks to boxing 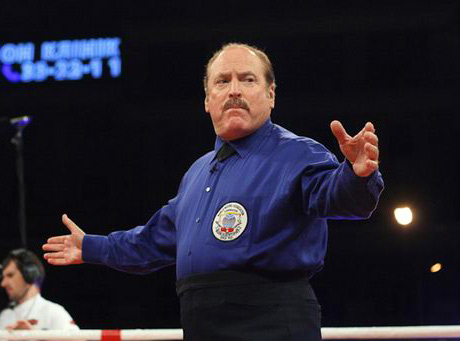 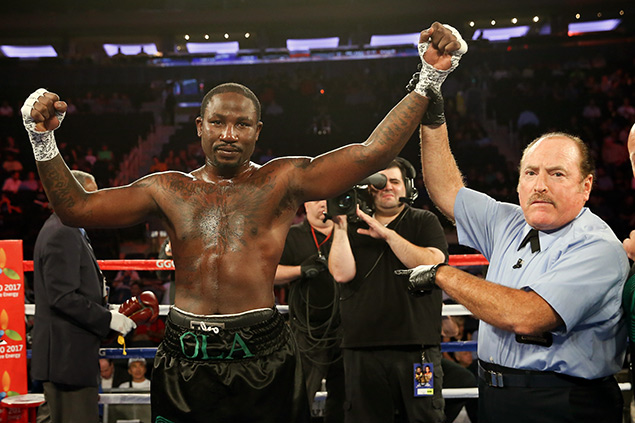 A recruiting slogan introduced in the 1920s urged young Americans who longed to visit exotic destinations to “Join the Navy and See the World.” But for boxing-loving individuals who might not be attracted to the military life, a possible alternative to sailing the high seas might be to become licensed as a referee, and rise through the ranks to become one of the very best in the business.

“I’ve been very fortunate to have been at the right place at the right time,” said Smoger, 64, who will be inducted into the International Boxing Hall of Fame in the Non-Participant category on Sunday. He will be joined in the Class of 2015 by Riddick Bowe, “Prince” Naseem Hamed and Ray “Boom Boom” Mancini (Modern); Yoko Gushiken, Masao Ohba and Ken Overlin (Old-Timer); John F.X. Condon and Rafael Mendoza (Non-Participant), and Nigel Collins and Jim Lampley (Observer). Ohba, Overlin and Condon are posthumous selections.

Actually, there have been quite a few right places and right times for Smoger, whose encyclopedic knowledge of the rules, instinct for making the right calls and disinclination to become intrusive if it isn’t necessary is not embellished by the sort of catchphrases and occasional notoriety that have made others in his often thankless profession magnets for criticism as well as praise. Smoger’s claim to fame has always been to do his job as quietly and efficiently as possible.

“I’ve been very blessed in that I never had anything really get out of control,” said Smoger, one of the few referees to gain admittance to the IBHOF’s exclusive club in his first year on the ballot, and while still active. “I didn’t have an ‘Ear Bite’ fight (see Evander Holyfield-Mike Tyson II) or a ‘Fan-Man’ fight (Bowe-Holyfield II).”

But don’t get the idea that Smoger’s duties are reserved primarily for foreign consumption. As he closes in on 1,000 bouts worked (at present he is 20 short of quadruple figures), 200 of which were for world championships, the man known and respected around the globe as “Double S” has officiated in 26 U.S. states, with 302 in his home base of New Jersey, 154 in Pennsylvania, 105 in Connecticut, 73 in New York and 50 in Delaware.

It all started for Smoger in Atlantic City, although exactly when might be considered a matter of interpretation. Always interested in boxing, he was serving in various capacities in the AC Police Athletic League gym in the late 1970s when former heavyweight champion Jersey Joe Walcott, then the chairman of the New Jersey State Boxing Commission, as it was known then (it’s now the New Jersey State Board of Athletic Control), stopped in and said, ‘We’re shorthanded. Is there anyone here at the PAL who can help out as an inspector (for that night’s professional fight card)?’

Smoger, of course, volunteered for the assignment and thus was he set upon his fateful path. His first refereeing assignment came on July 3, 1979, a six-round bout in which a young Dwight Braxton, who would go on to win light heavyweight and cruiserweight titles and become known as Dwight Muhammad Qawi, outpointed Lionel Butler at the old Steel Pier.

Working almost exclusively in Atlantic City in those early years, Smoger began getting assignments in other states and abroad. He said his first taste of widespread acknowledgment came on April 23, 1988, when he worked the first Simon Brown-Tyrone Trice bout in Pas-de-Calais, France, which was televised by CBS Sports. After Brown captured the vacant IBF welterweight championship on a 14th-round stoppage, an exciting tiff that was named Fight of the Year by CBS and the IBF, trainer/color analyst Gil Clancy (a 1993 inductee into the IBHOF who died in 2011) told the viewing audience, “There’s a young referee to keep your eye on.”

There have been numerous memorable afternoons and nights for Smoger, perhaps none more so than the middleweight unification matchup of Bernard “The Executioner” Hopkins and Felix Trinidad on Sept. 29, 2001, in Madison Square Garden. The bout, which originally had been scheduled for September 15, had been pushed back after the September 11 terrorist attacks on the

Twin Towers that left 2,977 dead and America – indeed, a vast majority of the worldwide community – outraged and in mourning. Perhaps inspired by the events of 18 days earlier, Hopkins turned in the finest performance of his career in scoring a 12th-round TKO of the favored Puerto Rican superstar. 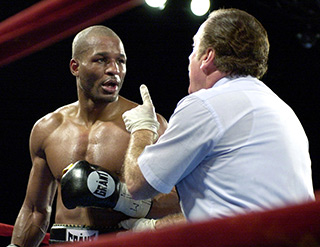 “The Garden was packed,” Smoger recalled. “You could feel the emotion. A section had been set aside for first responders and some of the survivors who felt well enough to attend. An amazing night, and the fight lived up to the hype. Hopkins put on a magnificent display.”

Getting the call to the Hall from executive director Ed Brophy in December – Smoger said it’s “like receiving the Emmy and the Oscar and Nobel Prize all at once” – is especially notable to Double S because it again enables him to join an even more exclusive club with Lane, the feisty bantam rooster of a referee whose voice has been all but silenced by the effects of a 2002 stroke. Like Smoger, Lane served as a prosecutor and on the Superior Court bench in Washoe County, Nev., in addition to his duties as a high-profile referee.

Unlike Smoger, Lane had a catchphrase (“Let’s get it on!”) and roles in two of the most bizarre fights ever, the aforementioned “Bite Fight” and “Fan Man” fights. In no small part because of his participation in those events, especially Holyfield-Tyson II, Lane was given his own television series, Judge Mills Lane, in which he dispensed instant justice for a national audience’s viewing pleasure.

“Mills and I would often say to one another that we were in a club of two,” Smoger said. “We were the only two people in the country, and maybe in the world, who shared our particular vocations and avocations.

“But, when you think about it, the responsibilities are more or less the same. “As a judge, you arbitrate between two sides and implement the rules in the court. You have to be fair and hear the litigants out. In the ring, it’s Fighter A and Fighter B. You’re still implementing the rules and you want to maintain a fair and equal playing field.”