Is Glen Tapia too tough for his own good? 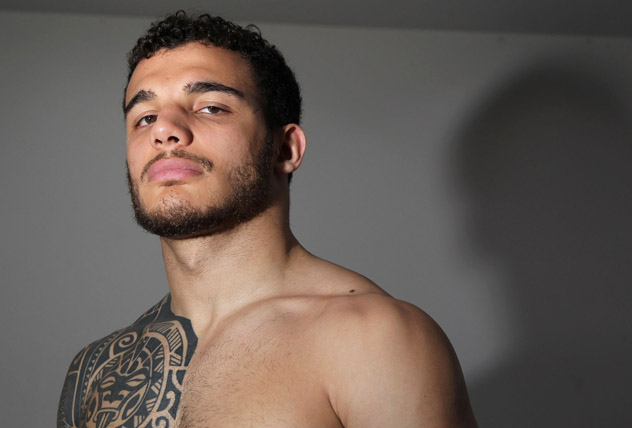 Confession: I find it hard to not root for the kid.

He seems so decent.

He talks like Rocky Balboa, with a delightful simplicity which speaks to an uncomplicated persona, refreshing in a confusing existence.

His Facebook videos with his daughter are precious. He tells me he wants to entertain the fans, that he so wants to be a legend. He’s humble and gracious in interacting with the press, not possessing of the Floyd Mayweather Jr.-y hubris, which was so off-putting during #MayPac fight week, leaving me wondering if “Money” finds joy in anything on this planet, even that moolah he claims to so adore.

Part of me would like it if Glen Tapia were able to pull off his dreams, get to that peak of that athletic mountain on which he wishes to ascend.

But gosh, that seems a harder climb after what happened on Friday night in Newark, when “The Jersey Boy,” not born to run but to rumble, found himself dealing with some true trouble bused in from outta state. A Frenchman, Michel Soro, dosed the Jersey resident Tapia with the sort of pasting that will leave a psyche, at the very least, wondering and, at worst, with a scarring that is exceedingly hard to scrub. maybe impossible.

Word on the street was Soro didn’t have a real finisher instinct, that the sight of blood didn’t embolden him, that he lacked a gene to really be that shark in the pugilistic ocean. But that scouting report got shredded and tossed in round four, when Soro, who entered with a 25-1-1 (15) mark, got Tapia in trouble and then rendered him unfit to continue at the Prudential Center. The conclusiveness of the halting might mean we have to question if the pursuit of fistic glory days for Tapia should even be something he should consider following…or if he might want to entertain the notion of a vocational fallback plan, right quick.

I don’t ponder that flippantly; having been stopped twice in his last five bouts, in a one-and-a-half year span, that question – “Am I cut out for this?” has to at least be on the table for the 25-year-old Tapia, who had to do the sauna to make 154 on Thursday.

The end of the fight, and maybe a dream, came when Soro landed a wicked right cross after an obscuring hook. Then he got to the work of being the closer he wasn’t supposed to be; a left uppercut had Tapia down almost. His will, a heart far too big – he told me before that his heart was his biggest strength AND weakness – kept him from taking a knee. He needed to, to give himself some room to breathe…but no, his pride kept him aloft and a target for the harsh launches of Soro. The ref, David Fields saved Tapia from himself, stepped in, ended the onslaught…and maybe a career cut short.

The fighter, trained by Freddie Roach, who was not present in New Jersey, looked dazed as he went to a stool. “A barrage of punches forced the referee to stop the contest,” the emcee told the assembled fans, many of them present to exult in the hometowners’ imminent triumph. “Just his second loss,” the blow-by-blow man told us…but the way both Ls played out…

Post-fight, Tapia (now 23-2, 15 KOs) was asked about what happened. He looked ready to cry, testament to how much he cares. “Mark my words: I’m going to be back,” he said. “You guys believe in me?” Many yelled yes but some held their tongues, unwilling to burst forth with the answer they knew the boxer desired but might not be in his best long-term interest to hear.

They want to tell him a resounding yes…but they worry. Is his a chin, a brain, built to handle what solid pugilists are going to be throwing at him?

I put that to his manager, Patrick Lynch, who handled another kid with immense pride, whose heart kept him from doing the “wise” thing, waving a white flag, and kept him fighting past a time when regular Joes would have crumbled.

“Glen came out great and I think he abandoned the jab,” said the late Arturo Gatti’s friend and handler. “When he got caught, I wish he took a knee but…We knew Soro was going to be there the whole fight. He’ll be back; we’ll talk. We’ll see what he wants to do. He’ll stay at 154; maybe he needs a little more discipline on the diet side.

Could he – would he – consider hanging them up though?

“That’s a great question and something I want to talk to him about,” Lynch told me, after a pregnant pause, “because that’s one thing I don’t want to see. I think that’s something we have to sit down and talk about as a team and analyze and make a decision on. His health is the most important thing in the world before anything else. He’s a proud kid and he’s the last kid that would walk away from anything like that. But we’ll talk as a team and see what fits best for him.”

This business…These kids dream XL and when the dreams die, sometimes they are the last to know. Their stubbornness serves them so well on the way up, keeps them working harder than lesser beings…but often that trait can be counterproductive, can obscure their vision, a needed clarity. I’m not saying Tapia needs to step away but, like fellow warrior/former opponent James Kirkland, who also tasted a second stoppage loss this weekend, perhaps some hard questions need to be asked such as: “Should I go against every grain of my being and admit this boxing life is no longer for me?”