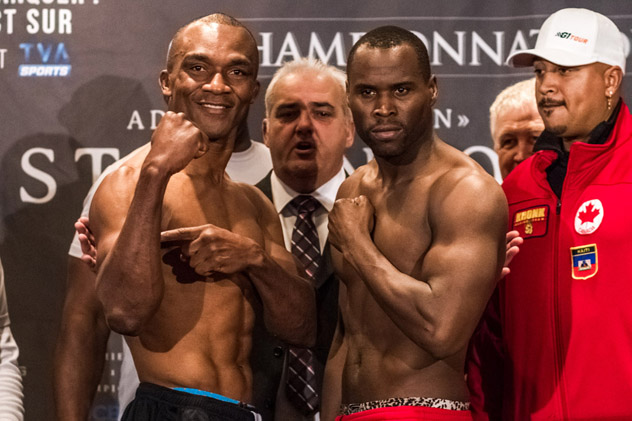 WBC and RING light heavyweight champion Adonis Stevenson and his fifth consecutive challenger, Sakio Bika, both weighed in at 174.5 pounds ahead of Saturday’s showdown at the Pepsi Coliseum in Quebec City, Canada.

The 37-year-old Stevenson won the linear title at 175 pounds when he sensationally upset Chad Dawson in less than one minute of action in June 2013. Since that time the Haitian-born Canadian has defended against Tavoris Cloud, Tony Bellew, Andrzej Fonfara and Dmitry Sukhotsky and he is heavily favored to prevail tomorrow night.

Bika (32-6-3, 21 knockouts) lost the WBC super middleweight title to Anthony Dirrell last August. He has never been stopped and, despite the seven-pound jump in weight, Stevenson (25-1, 21 KOs) will have his work cut out for him if he is to close proceedings inside of 12 rounds.

In a non-title bout, junior middleweight contenders Julian Williams and Joey Hernandez weighed in at 154.5 and 155 pounds respectively.