Golovkin, Monroe eager to put contrasting styles to the test 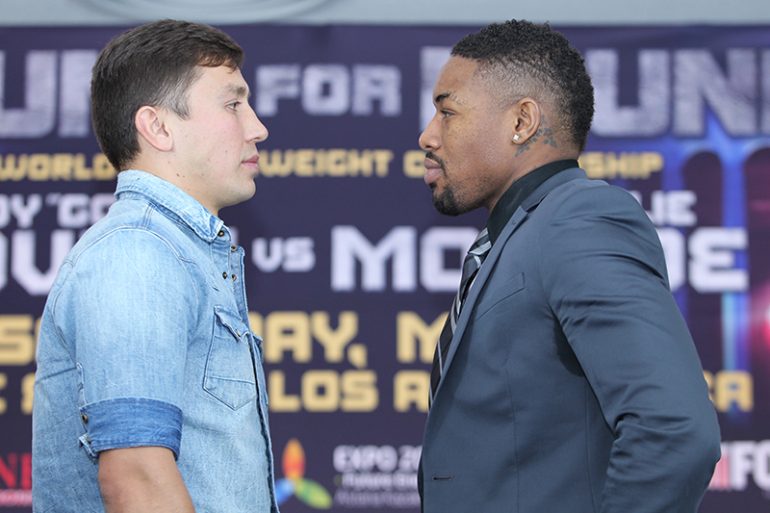 LOS ANGELES – Gennady Golovkin gets more love from boxing media and fans than any other fighter to have emerged as a world-class force in recent years, but hardcore heads weren’t having it when it was thought that the second bout of the undefeated middleweight titleholder’s 2015 might be against Tureano Johnson.

The Bahamas native, who gave Golovkin-victim Curtis Stevens all he could handle in a scorching scrap last April, is an all-action fighter but the aspiring matchmakers among boxing’s diehard fans believed Johnson’s aggressive style would play right into GGG’s heavy hands, which have pounded 19 consecutive opponents into a submission.

The boxing Twitterverse let out a collective groan when unheralded Jorge Sebastian Heiland was thought to be the front-runner for Golovkin’s May HBO date. The rugged Argentine’s only claim to fame is a 10-round KO of faded veteran Mathew Macklin (who GGG stopped in three rounds in 2013).

However, when it was announced that Willie Monroe Jr. would get the assignment against Golovkin even the very vocal minority of GGG haters held their tongues. Despite growing pressure for THE RING’s No. 1-rated middleweight to venture up a division to super middleweight (and even light heavyweight) to find suitable opposition, there wasn’t a lot of criticism of the Golovkin-Monroe matchup, which will take place on May 16 at The Forum in Inglewood, California.

“A lot of people respect me as a fighter,” Monroe told RingTV.com at the kick-off press conference, which took place at The Forum on Tuesday. “They know that I’m cut from the same cloth as Andre Ward, Guillermo Rigondeaux and Erislandy Lara. We’re bringing back the essence of boxing, which you don’t see that often anymore.”

By the “essence of boxing,” Monroe, who gained national attention by winning the Boxcino middleweight tournament on ESPN2’s “Friday Night Fights” series last year, means a hit-and-not-get-hit style. The southpaw New Yorker, whose father was a pro middleweight and whose great uncle, Willie “The Worm” Monroe, was a top-10 middleweight contender during the 1970s, is a smart and mobile boxer who can operate from a distance or engage in close without getting clipped.

The prevailing suspicion among fight fans who are not yet on board the GGG Hype Train is that the 2004 Olympic silver medalist from Kazakhstan has yet to prove himself against a slick and savvy boxer who knows when to trade punches and when to avoid them. While most fans view Golovkin (32-0, 29 knockouts) as a seek-and-destroy ring master, some skeptics see a plodding puncher with average speed and defensive holes – the kind of methodical style a boxer like Monroe can exploit.

Golovkin’s response to his doubters: Let’s find out.

“I want to be able to beat any style,” Golovkin told a small group of writers just before the start of Tuesday’s presser, “to get used to all styles, I need southpaws. I need good boxers like Monroe. He’s a smart guy, a good prospect.

“He’s not open to easy punches. I think he’s got a Cuban style, which can be difficult. We saw how much trouble Lara gave Canelo [Alvarez], maybe Monroe can do the same. I want to go rounds. I need longer fights to get better.”

“There’s a big difference between amateur and pro,” Golovkin said. “We boxed just three rounds in amateurs. Pro is tougher, more rounds. My dream fight is with [RING/WBC champ Miguel] Cotto, but this is the right fight for right now.

“I want to fight four times this year. Martin Murray was the first step. He was a solid guy. This is the second step. This guy (Monroe) has things that can test me. I want more work. I want to go seven, eight, 10 rounds.”

Murray lasted into the 11th round with Golovkin in February, the first fighter to do so, but the British contender took a frightful beating in the process. Few middleweight or super middleweight contenders/titleholders will admit it – especially on social media where everyone is brave – but they don’t want any of that.

“I wanted it because other middleweights didn’t,” said the 28-year-old resident of Ithaca, New York, who is coming off a one-sided decision over rugged fringe contender Bryan Vera in January.

“I like to take the road less traveled. When I see a lot of people running away, I want to go check out what they’re running from.”

There’s no false bravado in the voice of Monroe, who was the first to sign up for the Boxcino tournament, where he faced a variety of styles, and took on Vera with just three week’s notice. He’s confident in his ability and sincerely wants to see how he matches up with Golovkin, who he accepted to fight without hesitation.

“I just have to be myself, ‘The Mongoose,’ in this fight,” said Monroe (19-1, 6 KOs), who started boxing at age six and won numerous New York-regional and national amateur tournaments before turning pro.

“You never can tell what I’ll bring. I like to mix it up. I can box, move, stand and trade. I do what I need to do.

“People may laugh when I say that my power will surprise him because of my KO percentage, but speed and velocity is power, and I have a lot of speed. Power hurts, but speed kills. When he gets hit, he’s going to see that he’s not in the ring with Martin Murray or Matthew Macklin.”

“I respect all styles of boxing,” he said. “I have fought strong guys, rough fighters, street-fighter styles, punchers like Stevens. Right now, I need technical boxers.

It was announced during Tuesday’s press conference that RING/WBC flyweight champ Roman Gonzalez will be on the Golovkin-Monroe card. The undefeated (42-0, 36 KOs) Nicaraguan will face former WBC 108-pound titleholder Edgar Sosa in the co-featured bout to the event, which will open HBO’s live broadcast.

The addition of Gonzalez, a marvelously talented 27-year-old boxer-puncher who has held titles at strawweight and junior flyweight, is the reason event is being called “Pound For Pound,” according to Tom Loeffler of K2 Promotions (the lead promoter of the show that represents Golovkin).

“We didn’t call the show Pound For Pound just because of Golovkin, even though we think he’s the best fighter in the world,” Loeffler said. “We called the show Pound For Pound because Gonzalez, one of the best fighters in the world, is on it and this is a chance for fans to see two of the best pound-for-pound fighters in their primes fighting on the same card.”

Gonzalez is No. 4 in THE RING’s Pound-for-Pound Rankings. Golovkin is No. 9.

The Golovkin-Monroe card will be Gonzalez’s third time fighting in Southern California. He defended his WBA 108-pound belt in Pomona and in Los Angeles in 2012. The defense in L.A., which took place at the Sports Arena, was a thrilling unanimous decision over Juan Estrada, who has since earned two major flyweight titles. A Gonzalez-Estrada rematch is one of the best fights than can be made in any weight class, and one HBO could showcase in the future.

“We’ve been trying to architect Gonzalez’s HBO debut for some time,” HBO Sports executive Peter Nelson said during Tuesday’s presser. “At first we thought about doing a (112-pound) tournament called Lord of the Flies, but we realized that Gonzalez has already proven to be the lord of the flies.

“So we’re very proud to finally present him on HBO, which hasn’t showcased a flyweight star since Michael Carbajal (in the late 1990s). We wanted a strong test for him, which I think he’ll get from Sosa. Beyond Sosa, there are many attractive matchups for Gonzalez. The flyweights have a higher caliber fighter than most divisions. They shouldn’t be ignored (by U.S. networks) because they fight at a lighter weight.”

The recently refurbished Forum will be configured for 13,000 (and expanded to its full 16,000 capacity if need be). Loeffler is confident the “Pound For Pound” event will sell out, just as the “Mexican Style” event – Golovkin’s Southern California debut against Marco Antonio Rubio at the StubHub Center in Carson last October – did, despite Monroe being from the East Coast.

“The StubHub Center seats 8,000 and it was sold out in three weeks,” said Loeffler. “The tickets didn’t go that fast because of Rubio, or his nationality (Mexican). Golovkin carried that show. Fans wanted to see him against a credible opponent.

“Willie Monroe is credible, and fans know him because he fought on ESPN four times in the past year. Fans who weren’t able to see Golovkin last October will be able to see him this time, along with Gonzalez-Sosa. I don’t think we’ll have any trouble filling The Forum.”

The event, according to Ticketmaster.com, sold more than 2,500 tickets on the first day of sales.