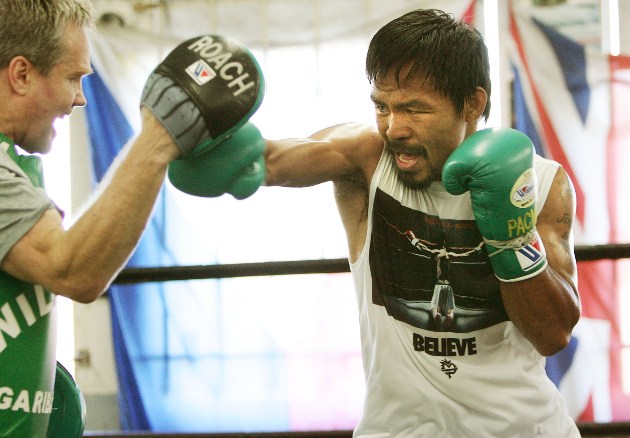 Nobody earned a cool grand for scoring a knockdown on Manny Pacquiao on day one of sparring at the famed Wild Card Boxing Club in Hollywood, California, reported Pacman’s trainer Freddie Roach on Tuesday late afternoon to RingTV.com.

The jury, meaning Roach, is still out on Tatli, who has some height, and a good jab but needs to be more aggressive to stick around in this gig, the trainer relayed. Yep, the stakes are, duh, too high to stick to anything that isn’t working in getting ready for the pugilist-specialist Mayweather on May 2.

“He did OK,” “Dedham” Freddie told me in a phoner. “I’m taking a look at him. I might have him stay to work with another fighter (if he isn’t a perfect fit for Manny).”

There will be pad and heavy bad work on Wednesday and more sparring on Thursday. Roach usually aims for about 150 rounds of mock-fighting with Manny, but as this is an abbreviated camp, with Floyd taking his sweet time agreeing to the deal, Pacman will likely do around 90-100.

“Sims will be back Thursday, he gave us very good work,” the Massachusetts-born tutor stated. “For the first day, I was happy. Manny had good moves, some mistakes, but overall very good. Tomorrow, we do 12 rounds of mitts and eight on the heavy bag.”

Thursday, Roach plans six with Sims, and KeAndre Gibson (12-0 with 5 KOs; age 25), a St. Louis-based boxer, will get the head-gear on and do a leather swap with The Congressman.

Roach told me about another add, a “Canadian brought by Michael Koncz,” Pacman’s Canadian advisor and right-hand man during negotiations for fight contracts.

Oh, and as for that money matter mentioned up top; Roach is again offering a knockdown bounty, a thousand bucks for anyone knocking Pacman on his can. Nope, nobody snagged the bonus today. I jabbed Roach, wondering if he shouldn’t be upping the ante being that May 2 is “The Clash for All the Cash,” and his own take-home will make him an IRS favorite come next tax term. “I thought about that, making it $5,000,” he said, chuckling. “I’ve been doing it a long time, and no one has ever collected.”

Woods is a Massachusetts-born Brooklyn resident who edits TheSweetScience.com.