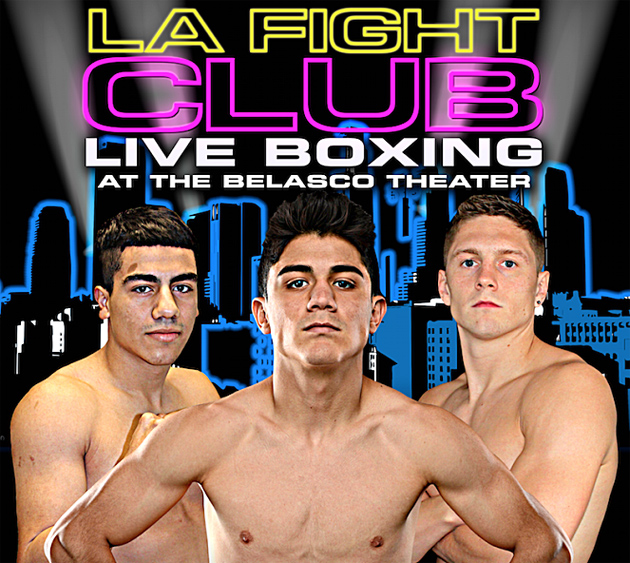 LOS ANGELES – When Joseph Diaz Jr. was still an amateur he accompanied his soon-to-be pro manager Ralph Heredia to a number of Fight Night Club shows to support young boxers he grew up with and trained with.

Watching former U.S. amateur teammates, such as Frankie Gomez, and frequent sparring partners, such as Charles Huerta, fight in front of their families, gym mates and hometown fans made Diaz wish he were already a pro so he could fight on one the popular shows that were held in Club Nokia at L.A. LIVE from 2009 to 2011.

Diaz, who is now a highly touted junior featherweight prospect, will get his wish. Golden Boy Promotions is launching a new monthly club series called “LA Fight Club” this year and the first show, on March 6, will be headlined by the 22-year-old South El Monte native.

“It’s a dream come true,” Diaz (14-0, 9 knockouts) told RingTV.com at Wednesday’s press conference The Belasco Theater, where the Fox Sports 1-televised series will take place. “I used to go to the old Fight Night Club shows to watch all these guys I knew from the amateurs who had just turned pro and I hoped that one day I could fight in that kind of environment with the loud music, and family, friends and everybody having a good time.”

The Belasco Theater, a historic landmark in downtown L.A, should recreate the same lively club atmosphere of the old Fight Night Club series but with even more style and originality thanks to the lavish design of the venue. However, Joseph won’t be able to enjoy the festivities until after his fight, a scheduled 10-round bout against Giovanni Delgado, a bantamweight from Mexico City with a decent record of 15-2, with 9 KOs.

“My dad showed me some video on Delgado and he looks like a tough but cautious type of boxer,” Diaz said. “He takes his time to set up his right hand, but he’s also willing to brawl if you take it to him. He probably has decent power judging by his record.”

Joseph Diaz Sr., who co-trains his son, is expecting a game effort from Delgado but he’s not worried about his son, even if the opponent can punch.

“He’s going to be tough, he’s not going to lay down, but do I worry about the guy having power? Not really,” he said. “I know my son has got good defense and guys who load up on their punches are open to counter shots.”

Diaz Sr. says Diaz Jr. is a very good counter puncher, but he adds that the friendly young man can do other things in the ring.

“We’re trying to make a complete fighter,” said Diaz Sr. “We have him work on his defense in camp, his boxing, his movement, but also his aggressive side. We want him to be ready for anything once he’s ready to take on the contenders in his division.”

Diaz Jr. hopes that day will come soon. He wants to remain on the same busy fight schedule – six to seven bouts a year – he’s been on since he turned pro in December 2012, so that by the end of this year or by early 2016, he’ll be ranked among the various sanctioning organizations.

“We’re definitely going to step up his competition this year,” Heredia said. “The 10-round war he had with (12-1-1) Ramiro Robles last July let us know ‘Jo Jo’ is prepared to be in tough, even though he’s still very young.”

“I’m a gym freak, I’m a workaholic, I’m always ready to fight,” he said. “I feel I’m ready to face better and better opposition as the year goes on because of my amateur background and because of my dedication. I fought the best boxers in the world as an amateur. Now I’m an elite prospect, so I feel like can be fighting top level guys very soon.

“Tougher competition will bring out the true ‘Jo Jo.'”

Diaz says fans should keep an eye on undefeated junior lightweight Christian Gonzalez (8-0, 8 KOs), the 29-year-old half-brother for former WBC featherweight champ Alejandro “Cobrita” Gonzalez, who is in the six-round co-featured bout on March 6 against an opponent to be named.

“We’ve sparred,” Diaz said of the Buena Park resident who trains out of the Azteca Boxing Club in Bell, California. “He’s very tough but he boxes well. He’s a good body puncher, too.”

The opening bout of the broadcast will feature unbeaten lightweight Santiago Guevara (8-0, 3 KOs), a 27-year-old Montebello resident who turned pro on a Fight Night Club show in 2011, against Carlos Morales (7-1-3, 3 KOs) of Highland Park. It’s the kind of local-vs.-local matchup that made Fight Night Club special and it looks like it could steal the show on March 6.

Following the March 6 premiere, future LA Fight Club shows will take place on the first Thursday of each month, including April 2, May 7 and June 4. Golden Boy Promotions President Oscar De La Hoya says the eventual goal of the series is to stage it twice it a month.