Sergey Kovalev named THE RING Fighter of the Year 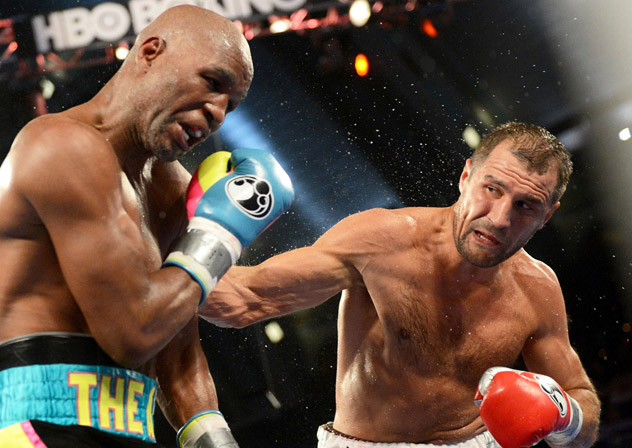 Sergey Kovalev (R) is THE RING Fighter of the Year for 2014 primarily because of his shutout of Bernard Hopkins.

The April 2015 issue of THE RING Magazine is on newsstands now. Don’t know where to find a newsstand near you that sells THE RING? Click here. To subscribe ÔÇö both to the print and digital versions ÔÇö click here. You can also purchase the current issue on that page.

We’ve known about Sergey Kovalev’s crushing punching power for some time. His nickname is “Krusher,” after all. And while it was obvious that he was a capable boxer, it wasn’t as clear whether he possessed a complete package of power, skill and ring smarts.

Kovalev left no doubt after his fight with Bernard Hopkins on Nov. 8, when he gave a boxing lesson to the boxing master. The Russian entered the ring with a strong game plan and executed it flawlessly, winning a shutout decision to unify three light heavyweight titles.

That, combined with knockouts of unbeaten opponents Cedric Agnew and Blake Caparello, was enough to make Kovalev THE RING Fighter of the Year for 2014. 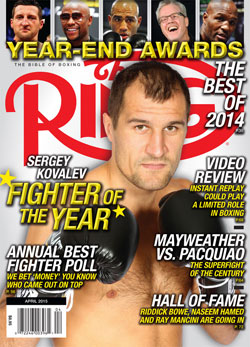 Kovalev edged out (in alphabetical order) Terence Crawford, Naoya Inoue, Manny Pacquiao and Nicholas Walters, all of whom had excellent years.

Who were the other winners in the 86th Annual Ring Awards? You’ll have to get your hands on the April 2015 issue, which is currently on newsstands.

Also in our year-end package, we feature our annual Best Fighter Poll of 10 worldwide boxing experts. In the poll, the fighters were awarded points for each vote they received: 15 points for a first-place vote, 12 for second, nine for third, seven for fourth, six for fifth, five for sixth, four for seventh, three for eighth, two for ninth and one for 10th.

Who won? Your guess would probably be on the “Money.”

The Highly Unofficial Awards – a tongue-in-cheek look back at 2014, written by David Greisman – is another element to our year-end package.

In Women’s Boxing, Cecilia Braekhus made history by unifying the four major sanctioning body titles but it was Delfine Persoon who had the best year, which earned her our Fighter of the Year honors for 2014.

Persoon won the award as a result of victories over accomplished opponents Erica Anabella Farias and Diana Prazak. She also shut out Judy Waguthii to complete a 3-0 year.

Also in this issue, in an opinion piece titled Instant Problems?, contributor Tom Hauser takes a look at video review in boxing. His conclusion: It can be useful – to a point.

Contributor Bernard Fernandez writes in No One is Perfect that the centerpieces of the International Boxing Hall of Fame Class of 2015 – Riddick Bowe, Naseem Hamed and Ray Mancini – have solid but flawed resumes.

In “A Vicious, Ugly, Horrible fight,” a look back on the life of the late Ernie Terrell, Hauser focuses on the beating Terrell took from Muhammad Ali in the famous “What’s my name?” fight.

Also in the April issue: