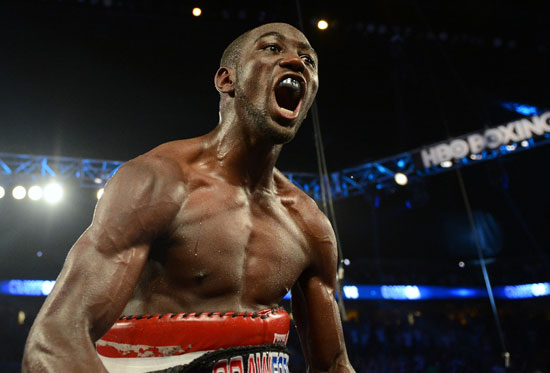 “We’re talking about it, and that’s all I can say,” said Arum, who is in discussion with Algieri’s promoter, Joe DeGuardia of Star Boxing. “Joe will be getting back to me on Friday, so we’ll see.”

Algieri initially appealed to overrule the WBO’s ruling which stripped Algieri “the second he stepped into the ring at the higher weight division,” according to WBO General Secretary, Jose Izquierdo.

Ultimately, DeGuardia agreed to drop the appeal in favor of working out a deal with Arum in accordance with WBO rules that allow Crawford (25-0, 17 KOs), as a lower weight beltholder, to rise into the next higher weight and challenge for a vacant title against the organization’s No. 1 contender, Algieri.

“Crawford has the right to move up and fight the No. 1 guy for the vacant title,” said Paco Valcarcel, president of the WBO, confirming the development.

In his last fight in November, Crawford, 27, scored a near-shutout unanimous decision victory over Raymundo Beltran at the CenturyLink Arena in Crawford’s native Omaha, Nebraska. Crawford had returned to the site where he scored four knockdowns on the way to last June’s come-from-behind ninth-round stoppage victory over former featherweight beltholder Yuriorkis Gamboa, a previously unbeaten fighter.

Crawford defeated Gamboa before 10,943 of the former’s partisan fans as a followup to his unanimous decision that dethroned Ricky Burns for the WBO 135-pound belt on Burns’ turf in Glasgow, Scotland, last March.