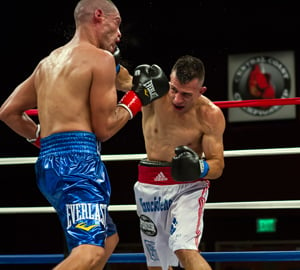 Francisco Santana is enjoying life right now. He is riding a nine-bout winning streak, including a win over one of boxing’s brightest prospects in Eddie Gomez.

Things were different over three years ago.

Back on Oct. 7, 2011, Santana suffered a disappointing eight-round unanimous decision loss to Jermell Charlo. The loss culminated a four-bout stretch where Santana had only one victory.

It looked as though Santana, who was 25 at the time, might become a career gatekeeper for prospects or fringe contenders. His current win streak prevented that from happening and tonight, he looks to take his first steps toward contender status and a successful 2015 with a 10-round bout against Kendal Mena at the Chumash Casino Resort in Santa Ynez, California. The bout will open the “Friday Night Fights” telecast that airs on ESPN2, beginning at 9:00 p.m. ET/ 6:00 p.m. PT.

The bout will precede the main event between Darleys Perez and Jonathan Maicelo.

The first six years of Santana’s career resembled that of a roller coaster. There were highs (wins over Antonio Johnson and Tony Hirsch) and lows (losses to Karim Mayfield and Charlo), but was unable to put wins together against decent opposition. Prior to the loss to Charlo, Santana fought to a six-round draw against current young contender Julian Williams.

Mena is an unbeaten fighter from the Dominican Republic. He took the fight on over a week’s notice after original opponents Sebastian Lujan and Randall Bailey backed out of the fight.

“I know change of opponents could affect a fighter, but those things always happen in boxing,” Santa told RingTV.com during a recent phone interview. “When Lujan and Bailey dropped out, it wasn’t a distraction for me. I love the sport too much for it to let it affect me.”

Santana has never been one to shy away from a fight. He has been eager to take on avoided fighters if that fight could land him a lucrative bout or title fight down the line.

“I had to learn about myself and make certain adjustments, but I’ve been wanting these tough fights for some time now,” he said. “As the underdog, the win over Gomez put me in contender status and more wins could put me in line to fight for a world title.”

This could be a great year for Santana. He has momentum on his side, and he has built a following out of fighting at the Chumash Casino Resort, which is near his hometown of Santa Barbara.

“So far, I have worked hard and stayed focused. I’m willing to take on anyone in the top 10.

“I’m not ducking anyone.”