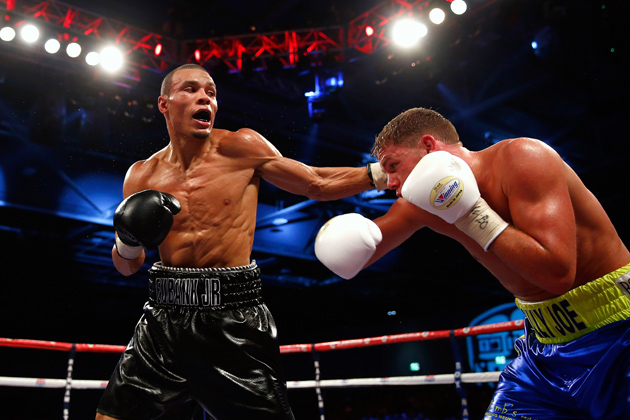 A hammer-fisted 25-year-old who is the son of the former 160-pound champion, Eubank (18-1, 13 KOs) is coming off last month’s split decision loss to unbeaten Billy Joe Saunders in a clash of southpaws.

In victory over Eubank, Saunders earned a right to face left-hander Andy Lee, who won the WBO’s vacant belt by sixth round technical knockout over Matt Korobov on Dec. 13.

Eubank was riding a streak of 10 straight stoppage wins before falling to Saunders. In his previous bout on Oct. 25, Eubank had registered a second round technical knockout over Omar Siala.

The 28-year-old Chudinov (14-0-2, 9 KOs) is 8-0-1 with six knockouts over the course of his past nine fights and was last in the ring in August for a third round knockout over former title challenger Mehdi Bouadla, whom he dropped once in each round.

For the main event, the 6-foot-9 Fury is coming off last month’s 10th-round stoppage in a rematch against countryman Dereck Chisora, whom Fury had vanquished by unanimous decision in July 2011 when the fighters entered the bout with identical 14-0 records. Fury, 26, took Chisora’s European title and also won the vacant British title for a second time.

A 6-foot-2 German-based Romanian, Hammer has won 10 consecutive fights, six by knockout, since losing two straight fights by sixth round stoppage to title challenger Mariusz Wach in July 2010 and majority decision to Taras Bidenko in December of that same year.