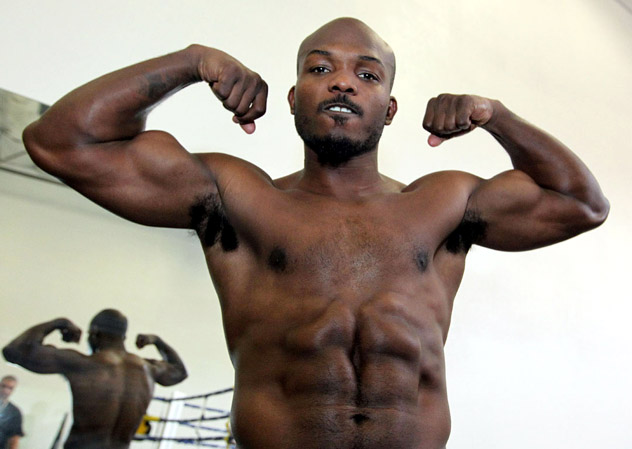 06
Dec
by Lem Satterfield
Tim Bradley caused plenty of eye-rolling with his “can’t we get along speech” at the 89th-annual Boxing Writers Association of America dinner in May.

“What I said, I don’t think that there was no harm in it,” said Bradley, who is promoted by Top Rank. “I just said it because nobody else had the balls or the decency to say the truth.”

The two-division titlewinner made the call for peace during his turn at the podium to receive an award, along with Ruslan Provodnikov, for the 2013 Fight of The Year.

“I don’t know, maybe that night a lot of people thought about it. I was like, ‘We’re all in the same room and we we’re all conversing like we’re all buddy-buddy,” said Bradley. “But behind closed doors, we’re slamming each other and putting each other down. So I thought that what I did was great, and that if it has helped in any way then that’s fantastic.”

In the months since Bradley’s acceptance speech, Top Rank CEO Bob Arum has declared his relationship “totally repaired” with Golden Boy President Oscar De La Hoya. Their union led to the June resignation of Schaefer, and later De La Hoya’s declaration that the “Cold War” is over.

“The fact that Golden Boy and Top Rank have put a couple of shows together this year, and I’m pretty sure that there are many more shows coming up next year, I think that it’s great. But it’s not only great for the fighters, but also for the sport of boxing. If the the sport of boxing wants to continue to reign, and to continue to do what it does and be productive, man, we need to start putting forth the best fights that are possible for the fans. Because the fans are getting tired of it. I don’t know if you see it, but I see it,” said Bradley.

“Pay-per-view is not like it used to be, baby. These fans are catching on and they’re not playing anymore. They’re not buying the way they used to buy, and some of the best fighters in the world can’t even hit a million buys anymore. So the best fighters have got to fight the best in order to get those types of numbers for boxing, because people love boxing, but they want to see the great fights. So the fact that they’re working together is just great. That’s fantastic. If I pissed anybody off, then I’m glad I did.”

Bradley (31-1, 12 knockouts) will let his fists do the talking against welterweight rival Diego Chaves (23-2, 19 KOs) on Dec. 13 on HBO from the Cosmopolitan in Las Vegas, hoping to return to the form that enabled him to end Manny Pacquiao’s 15-bout winning streak.

Bradley was dethroned as WBO 147-pound beltholder following a unanimous-decision loss to Pacquiao in a rematch earlier this year.

During a Thursday media conference call, Moretti recalled Bradley’s moment of passion at the BWAA dinner.

“I forgot that speech. He raised a lot of eyebrows and, ironically, you know, listen he’s going to make a good politician when he’s done, or something,” said Moretti. “Or he’ll be an executive, because since then a lot of fights have been made, and at least there’s dialogue going on. So it’s all been a good thing.”

THE RING’s No. 2-rated 147-pounder, Bradley will be among several quality welterweights competing in Las Vegas on Dec. 13.

On the same night on Showtime from the MGM Grand, RING No. 9-rated Amir Khan will face No. 10-rated Devon Alexander in a clash of former titleholders, and RING No. 7-rated Keith Thurman will face Leonard Bundu in a battle of undefeated fighters.

Bradley pooh-pooed the competition to his show during the media conference call.

Chaves’ two losses were to Brandon Rios by ninth-round disqualification in August and to Thurman by tenth-round stoppage in July 2013.

“We tend to look ahead, but Tim knows this, and that’s that he’s got a fight on his hands on Dec. 13 with Chaves. Tim knows that,” said Moretti, who also mentioned RING No. 4-rated IBF 147-pound titleholder Kell Brook as a potential opponent for Bradley.

“Tim knows that he has a tough fight ahead of him, and he can deal with having his back against the wall, and all of the pressure. But he knows that he has a fight on his hands. For Tim, and for us, that’s all that matters. On Dec. 14, we can start talking about other fights, but, up until then, it’s all about Dec. 13, really.”

Still, Bradley looks forward to the opportunity of taking advantage of the Cold War’s denouement.

“Until those things are fixed, hey, I don’t know. But I’m going to stay in my lane, and I’m going to do what I do, and if these guys want to fight, then they can reach out to my people and reach out to my manager, who is my wife or my trainer. Reach out to Top Rank, and if it makes sense for everybody, then let’s do it.”