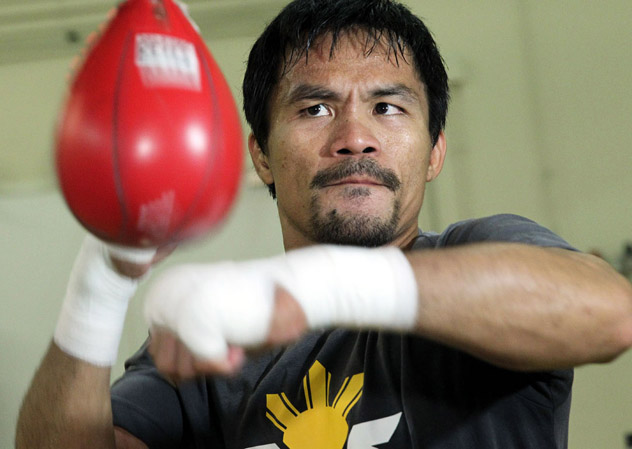 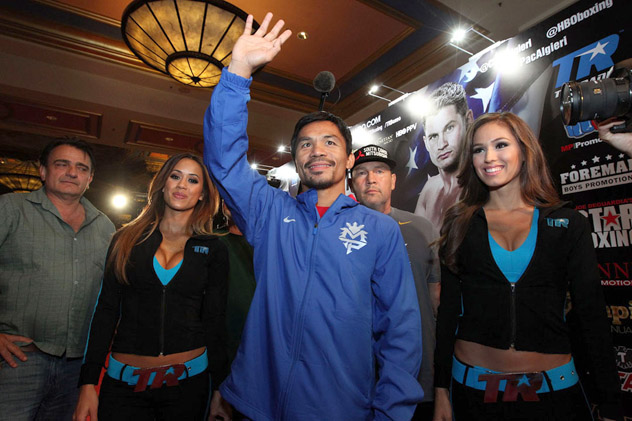 Manny Pacquiao arrives to The Venetian Macao Resort in Macau, China, where he will face Chris Algieri on Saturday. Photo by Chris Farina

Manny Pacquiao steps into the ring at the Cotai Arena in Macau on Saturday to defend his WBO welterweight title against unbeaten Chris Algieri at a catchweight of 144 pounds.

Earlier this year Pacquiao (56-5-2, 38 knockouts) exacted revenge over Tim Bradley and regained his WBO belt by outpointing the pound-for-pound rated boxer, while Algieri put himself in the shop window beating Pacquiao’s friend and sparring partner Ruslan Provodnikov at junior welterweight to earn the WBO 140-pound title and eventually get his shot at the Filipino icon.

Though some have questioned Algieri’s resume, Pacquiao believes the New Yorker earned the right to face him but intends to take the challenger’s unbeaten status as a fighter.

“I love fighting undefeated fighters and being the one who makes them once-defeated,” Pacquiao told RingTV.com. “I did that to Timothy Bradley in my last fight.”

Pacquiao has faced seven fighters with unbeaten records in a career that has seen him win three RING magazine Fighter of the Year awards, seven world titles (the WBO 147-pound title twice) in six weight classes, including lineal titles in four of them. [Editor’s Note: Pacquiao earned THE RING’s recognition as featherweight champ after he beat Marco Antonio Barrera in 2003 and as junior welterweight champ after he blitzed Rick Hatton in 2009, which brings his title total to nine in a record eight weight classes, according to some boxing historians.]

Pacquiao, known as an explosive puncher in the 2000s, is without a knockout victory in five years. He hopes to change that on Saturday but down played the drought.

“We cannot control the fight,” said the 35-year-old veteran. “The fights aren’t all the same. What we’re doing right now is to getting back hungriness, focus and killer instinct the people want to see.”

Hall of Fame promoter Bob Arum, CEO of Top Rank Inc., was keen to dispel any notion of it being an easy night’s work for Pacquiao.

“If (Algieri) had no chance of beating Manny who the hell would wanna see the fight, said Arum. “He has a good chance to win this fight. I’m not saying he will but he has the style to be very competitive with Manny and to pull out the victory.”

Anson Wainwright – What are your thoughts on facing Algieri?

Manny Pacquiao – I am very excited for this fight. Algieri is a young and smart world champion who has proved a lot in his recent fights. He earned the right to fight me when he defeated Ruslan Provodnikov.

AW – The fight takes place in Macau. What are your thoughts on returning there?

MP – The Venetian Macao has become a boxing capital. The Cotai Arena is a world-class venue for boxing and the Chinese fans are a wonderful audience to fight for in a live setting. When I fought there last year against Brandon Rios, all the seats were filled before the first bout began. I also like that it is easier for my Filipino fans to see me live since it is only a 90-minute flight from the Philippines. It feels like I am fighting at home.

AW – You have been criticized in some quarters for facing Algieri. How would you counter that argument?

MP – Algieri upset Ruslan and earned his shot. And the way he beat Ruslan made it all the more impressive. He was knocked down twice in the first round and one eye was swollen shut for most of the fight. Ruslan is known as “The Siberian Rocky” but on that night, it was Algieri who fought like Rocky.

AW – In your last fight you gained revenge over Tim Bradley, winning back the WBO welterweight title. Tell us about that fight and how important it was for you to beat Bradley.

MP – It was very important for several reasons. Though I accepted the judges’ decision in our first fight I didn’t agree with it. I don’t think I lost more than two rounds. When we fought the rematch I was determined to fight the perfect fight against him. I wanted my world title back and nothing was going to stop me. Bradley told everyone I had lost my killer instinct and I was no longer as good as I used to be. Beating him in our rematch gave me great satisfaction. I had a lot to prove that night and I proved it.

AW – Algieri upset your friend Provodnikov in his last fight. What are your thoughts on that fight?

MP – Algieri fought a very intelligent fight and he took advantage of Ruslan’s style and his mistakes. Algieri used movement and speed to overcome Ruslan’s power. Algieri adapted when Ruslan couldn’t. It was impressive.

AW – Is revenge for Ruslan and also your trainer Freddie Roach a motivational tool for this fight?

AW – What are your thoughts on the welterweight division?

MP – The welterweight division is one of the most exciting in boxing today.

AW – You’ll be 36 a month after the Algieri fight. How much longer do you feel you can continue to perform at the highest level in boxing?

MP – I will continue fighting as long as I feel good and my abilities stay at the level I have enjoyed throughout my career. I have no set time or age for retirement and I look forward to more challenges. There is one fight out there that the fans want from me (Floyd Mayweather Jr.) and I would dearly like to give it to them because they deserve it. But like a fight, it takes two to negotiate. I remain hopeful that fight will be made.

AW – You’re a very busy person, with congress, family and also other interests like movies and music. Can you tell us about your life away from those things?

AW – In closing do you have a message for Algieri ahead of your fight?

MP – My fight with Algieri will be very exciting. We are both working very hard in training camp and all that hard work should produce a very explosive fight. I hope everyone tunes in because I intend to put on a great show on Nov. 22.