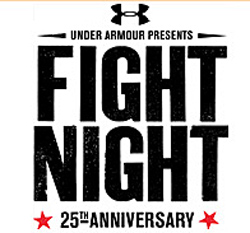 “To be honest with you, it’s an honor to be here next to so many of my colleagues, legends and great athletes,” said Chavez, 52. “Together, they have all done so much in the sport, and I feel honored to be here next to them all tonight.”

Also in attendance was Mauricio Sulaiman, president of the WBC. Raul Fernandez, a native of Washington, D.C. who is of Cuban and Ecuadorian descent, co-chaired Thursday’s event with Kevin Plank, CEO of Under Armour.

“The year before last, we did about $2 million, and last year, we did We did about $4 million, and this year, we should make close to $5 million,” said Fernandez, 48. “This year, we decided to take it up a level, not just in the amount raised, but in the quality. My good friend [the late] Joseph E. Robert, Jr., who was an avid boxing fan, founded this organization 25 years ago to help needy kids.

“Now, we have taken it to a new level with our partnership with Under Armour, and Kevin Plank, who is our dear friend, has been very involved. A funny story is that Kevin and I and Joe all went to the same high school, St. John’s, here in the district, although not at the same time. So we’re very committed to this cause, and we’re committed to what this means.”

A diehard fan of five-division champion Sugar Ray Leonard, Fernandez said he recalled watching his fights, including the first of three battles with Duran, in his home in Silver Spring, Md.

Leonard captured his first major title belt with a 15th-round stoppage of previously unbeaten Wilfred Benitez for the WBC welterweight belt in November 1979, then lost the belt in his second defense by 15-round, unanimous decision to Duran in June 1980. Leonard regained it in their “No Mas” return bout by eighth-round TKO in November 1980.

“I remember watching that fight with my parents. It was incredible. It was appointment T.V., which was so cool. Of course, I was stunned when Sugar Ray lost. That was incredible, and then, with the rematch, obviously, was as well. Those are moments when memories are created. I got to spend a lot of time with Roberto this week.,” said Fernandez.

“Muhammad Ali was here one year, and Gerry Cooney comes every year. He’s terrific. We’ve had different legends here every year, and they really have expressed their concern for the kids and the community over the years. I love boxing. What we get to do here is to, hopefully, re-introduce boxing to maybe some people who once knew that they loved the sport like I do.”

HOLMES: ‘I WOULD COME OUT OF RETIREMENT’ TO BEAT WLADIMIR KLITSCHKO’

The event was not without its moments of jocularity, particularly when Holmes was asked his thoughts about RING/IBF/WBA/WBO champion Wladimir Klitscchko (62-3, 52 knockouts), who will defend his belts against Kubrat Pulev (20-0, 11 KOs) on Saturday.

The clash with Pulev is to represent Klitschko’s 26th title fight overall and the champion is 23-2 over that stretch thus far. His record of 21 defenses ranks second only to that of the 25 (all consecutive) by the legendary Joe Louis, having already surpassed the 20 by Holmes.

Cooney provided his own scouting report on Klitschko, as well as his prediction on the fight with Pulev.

“Klitschko has fought safe all of his life, because there’s no one to fight. Klitschko’s comfort zone is on the outside, so he stays outside and works the jab. You have to get inside to take him out of his comfort zone. But all of the guys try to box him, but you can’t box Klitschko, because he’s a great boxer,” said Cooney.

“You have to get him uncomfortable by getting close to him and make him make a mistake, and they’re not doing that. So I think that he’s going to fight safe again on Saturday. Pulev is a big puncher, but I think Klitschko’s going to have his way with him. I think he’ll win by a knockout, if not, a decision. That’s what he does all the time.”

Cuadras floored Maibait once in the fifth and twice in the final round of his victory. Although he had appeared to drop Maibait at the bell ending the fourth, referee Eddie Claudio waved it off, ruling that the fall was the result of the fighters’ feet being tangled.

“The right hand was there all night because he’s a lefty, so I got to use it a lot and walk to the left. Sometimes the referee can not see very well, and calls it wrong, but I felt that I connected on that first punch and that I knocked him down in the fourth round,” said Cuadras.

“But you have to be patient, and know when to finish your rival. I wasn’t sure what round I was going to knock him out it, but I worked hard to finish him and I was feeling the rhythm, and I was able to get him later on.”

Cuadras won his belt by an eighth-round technical decision over RING No. 3-rated Srisaket Sor Rungvisai in Mexico last May, ending the Thai fighter’s 26-fight winning streak that had included 24 knockouts.

Cuadras was ahead, 77-74, 77-75, and, 78-73, on the cards when a nasty cut over his left eyebrow, caused by an accidental headbutt in the fourth round, worsened and led to referee Jay Nady halting the fight on the advice of a ringside doctor.

Cuadras’ last fight in November also ended in a fourth-round technical draw with Jose Salgado, again caused by a clash of heads.

Cuadras said that he plans to defend his 115 pounds a few more times before considering a rise in weight.

“I think that I would like to have maybe four more defenses and then move up,” said Cuadras. “I want to defend my title for maybe one more year, and then go up in weight.”

During that time, said Cuadras, he would like to entertain a challenge perhaps from RING No. 1-rated junior bantamweight, Carlos Narvaez, holder of the WBO’s title, if not, RING No. 1-rated flyweight Roman Gonzalez, who has the WBC title for that weight class.

“It’s hard with Gonzalez because we’re both [promoted by] Teiken Promotions, but if they made the fight, then I would take it. I just want to face the best. He’s the best in the flyweight, and I’m the best in super flyweight,” said Cuadras.

” I’m the champion, so he would be in trouble. I would take on all of them. I’m ready. The super flyweight champion is Carlos Cuadras, and they would all be in trouble with me. If our promoter says yes, then I would be okay with [fighting Gonzalez.”

Narvaez, who turned 39 last month, “is an old man and I would finish him. I can retire him if he wants it,” said Cuadras. “It would just be up to our promoters to get together and make the fight.

Chavez Sr. would prefore that his son’s next fight to be against IBF super middleweight titleholder Carl Froch rather than former 160- and 175-pound beltholder Bernard Hopkins, although the father would “welcome” a bout against Hopkins should it materialize.

A former WBC middleweight titleholder who has also fought at 168 pounds as well as at a 173-pound catchweight, Chavez Jr.’s name was mentioned as a potential opponent for Hopkins by Golden Boy President Oscar De La Hoya in the wake of the 49-year-old’sloss last Saturday to Sergey Kovalev, whose unanimous decision victory added the IBF and WBA belts to the WBO title he already owned.

“I think that Bernard Hopkins is a great boxer, and it’s incredible to see what he has done during his career, and the fact that he’s done it for so long at his age,” said Chavez Sr. “But I don’t think that it would be the best matchup for Junior, because it wouldn’t be a show for the fans. But, in case the fight was made, we would welcome the fight. I would want to see him against Carl Froch. That’s the one. That’s it.”

Chavez Jr.’s recently signed with with advisor Al Haymon, all but trumpeting his desire to separate from career-long promoter Top Rank Promotions, given that CEO Bob Arum is not usually known to do business with Haymon.

But Top Rank filed suit against Chavez U.S. District Court in Nevada in August alleging that the boxer owes the company one more fight and that he has until April 6, 2016 to grant it.

As a result, it appears that Top Rank attorney, Dan Petrocelli of the Los Angeles-based O’Melveny and Myers law firm, and Chavez’s attorney, Howard Weitzman, could be due for a legal battle.

Chavez Sr. said he approves of his son’s decision to sign with Haymon.

“I think that it’s a great idea. I think that this was the best choice that he could have made,” said Chavez Sr. “Now he can be well-represented, and he also doesn’t have to worry anymore about being a lawyer, or training himself. Now, he can fully concentrate on being a boxer and the rest of his career.”

Morales, 38, was asked to rank his top five Mexican fighters of all time, which he did through translation by Sulaiman.

“I would say, in no particular order, that it’s Julio Cesar Cesar Chavez, Juan Manuel Marquez, Marco Antonio Barrera, Salvador Sanchez, and then, me,” said Morales, who confirmed that he is permanently retired.

Although he is known for winning one of three fights in a trilogy with Barrera, who lost a unanimous decision to Marquez, Morales said he does not regret having never faced Marquez.

“We were always fighting at different times and different levels. Even when we were fighting in the same era, at that time, nobody knew Marquez, and it wasn’t an attractive fight for the fan,” said Morales.

Douglas, 22, won 60-54 on all three cards. Douglass improved to 4-0-1 with three knockouts in his past five fights, having previously been in action for last month’s sixth-round technical knockout of Jose Medina.