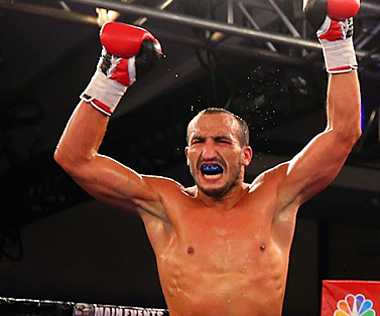 Trained by Abel Sanchez, Mohammedi (36-3, 22 knockouts) is coming off last Saturday’s third-round stoppage of Demetrius Walker on the undercard of a shutout unanimous decision by Kovalev that added Bernard Hopkins’ IBF and WBA titles to Kovalev’s WBO belt.

Mohammedi, 29, had previously been in action for a seventh-round stoppage of Anatoliy Dudchenko in an IBF eliminator bout in June. Mohammedi is 12-0 with 10 knockouts since being stopped in the second round by Dmitry Sukhotsky in Oct. 2011.

“Signing with Main Events was one of my dreams come true. I finally have the opportunity to show the world that Nadjib Mohammedi is the best light heavyweight in boxing today,” said Mohammedi, of Gardanne, Bouches-du-Rh├┤ne, France.

“I was unknown before but now with Kathy and her staff’s work, everyone will know my name. It is an honor to now be part of an organization that has the top fighters in my division and now, everyone will now know the name Nadjib ‘Irondjib’ Mohammedi. The only trajectory is the victory.”

“When Sergey Kovalev won the WBO light heavyweight title from Nathan Cleverly in August of 2013, we began investing heavily in the light heavyweight division,” said Duva. “Nadjib is a very welcome addition to our roster and there are big things for him right around the corner in 2015.”

After fighting under Sanchez for the first time, Mohammedi is expected to soon join Gennady Golovkin and Sullivan Barrera at Sanchez’s Summit facility in Big Bear to prepare for Kovalev.

Note: Quotes courtesy of a release from Main Events