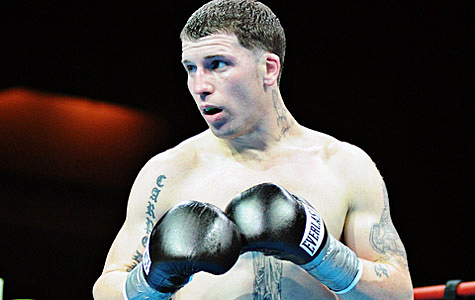 Danny O’Connor returned from a one-year retirement to earn a fourth-round knockout against Andrew Farmer in the main event of a Fox Sports 1-televised card on Thursday at Memorial Hall in Plymouth, Massachusetts.

O’Connor (24-2, 8 knockouts), a welterweight who briefly retired and was out of the ring for 12 months following a disappointing loss to former 140-pound beltholder Vivian Harris, didn’t show any signs of ring rust against Farmer.

The 29-year-old southpaw, who scored a knockdown in Round 2, displayed a nice jab and fast fluid body-head combinations as he stalked Farmer (18-3, 8 KOs), a game 29-year-old club fighter form Virginia. Both welterweights suffered cuts during the bout but O’Connor was in command throughout and he ended the bout with a well-placed left to the body that dropped Farmer to one knee where he remained for referee Jack Morell’s full 10 Count. Time of the stoppage was 2:33 of Round 4.

Bogere (26-1, 18 KOs), who scored his third consecutive stoppage since dropping a unanimous decision to WBA beltholder Richar Abril last March, was busy – averaging 100 punchers per round – but poised throughout the fast-paced bout.

The 26-year-old Ugandan, who is based in Las Vegas, stunned Garcia (30-7-2, 18 KOs) at the end of Round 1, dropped the Tijuana native at the start of Round 2, and finished the tough 25 year old with a left-right combination two minutes into Round 5. Garcia went down and remained on the seat of his pants for referee Mike Marvell’s full 10 Count due to an accumulation of punishment.

Bogere, who made good use of his jab and feints, displayed nimble footwork and a varied offense that featured an accurate body attack. He says he wants to get back into title contention in 2015.

In the opening bout of the broadcast, former Irish amateur star Jason Quigley stopped Greg McCoy in the opening round of their scheduled four-round super middleweight bout.

Quigley (3-0, 3 KOs), who turned pro this past summer after a stellar amateur career, had a clear advantage in hand speed and technique and the 23 year old put it to good use by consistently beating McCoy (3-4-1, 1 KO) to the punch.

A crisp left hook-right cross dropped McCoy, who had been out of the ring for three years, into a corner and the New Englander remained down for referee Marvell’s full 10 count.