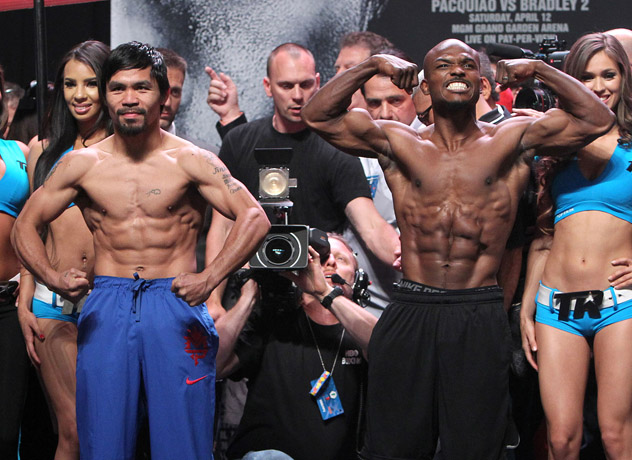 Two-division titllist Tim Bradley is ready to give as good as he gets if things get dirty against Diego Chaves in their Dec. 13 welterweight bout. Bradley hopes a win could lead to a third fight with Manny Pacquiao.

Bradley (31-1, 12 knockouts) was dethroned as WBO 147-pound beltholder following a unanimous decision loss in April to Manny Pacquiao, who avenged his split decision to Bradley in June 2012.

Bradley will meet the rugged Chaves (23-2, 19 KOs) in a clash to be televised on HBO from the Cosmopolitan in Las Vegas, hoping to return to the form that enabled him to end Pacquiao’s near seven-year, 15-bout winning streak.

“I’ve been fighting the best for awhile now and am looking forward to fighting Chaves at the Cosmopolitan,” said Bradley, 31, during a Monday press conference at the Avalon Hollywood Hotel in Los Angeles.

“After Chaves, why not a grudge match with Pacquiao? That’s what I have thinking about. I like to fight and and am always looking to fight the best available.”

Chaves, 28, is 1-2 in his past three fights and is coming off a ninth-round disqualification loss to Brandon Rios in August.

Chaves had been penalized once in the fight and Rios twice before Chaves’ was disqualified by referee Vic Drakulich after the tangled fighters had tumbled to the canvas at the 1:26 mark of the ninth round.

“Diego Chaves likes to bring it and I will be ready for it,” said Bradley. “If he gets dirty in the ring and the referee doesn’t handle it, I will take care of business myself.”

Chaves had taken a streak of five consecutive knockout victories into his bout with Keith Thurman, who dropped Chaves twice during a 10th-round knockout victory in July 2013.